October 27, 2009 at 3:34 PM ET by Jesse Lee
Twitter Facebook Email
Summary:
The President discusses an exciting new chapter in the quest for clean and renewable energy: a $3.4 billion investment of Recovery Act funds to modernize the electric grid.
[[nid:5775]]

Standing amongst thousands of black-and-white solar panels, President Obama today discussed an exciting new chapter in the quest for clean and renewable energy: a $3.4 billion investment of Recovery Act funds to modernize the electric grid.  Speaking at the Florida Power and Light’s (FPL) DeSoto Next Generation Solar Energy Center, the President outlined how a smarter, more reliable energy system will benefit Americans—not to mention the planet:

On their own, the opening of this new solar plant or the installation of new smart meters or the investment in grid modernization will not be enough to meet the challenges posed by our dependence on fossil fuels.  But together, we can begin to see what a clean energy future will look like.  We can imagine the day when you'll be able to charge the battery on your plug-in hybrid car at night, because your smart meter reminded you that nighttime electricity is cheapest.  In the daytime, when the sun is at its strongest, solar panels like these and electricity stored in car batteries will be able to power the grid with affordable, emission-free energy.  The stronger, more efficient grid would be able to transport power generated at dams and wind turbines from the smallest towns to the biggest cities.  And above all, we can see all this work that would be created for millions of Americans who need it and who want it, here in Florida and all across the country.

So we're on the cusp of this new energy future.  In fact, a lot of it is already taking place.  Even as I'm here today, Vice President Biden is in Delaware announcing the reopening of a once-shuttered GM factory that will soon put people back to work building plug-in, electric hybrid vehicles.  On Friday, I was in Boston -- that's good news.  (Applause.)  On Friday, I was in Boston, where workers will soon be breaking ground on a new Wind Technology Testing Center that will allow researchers in the United States to test the world's newest and largest wind turbine blades for the very first time.  And there are recovery projects like this in cities and counties all across the country.

So at this moment, there is something big happening in America when it comes to creating a clean energy economy.  But getting there will take a few more days like this one and more projects like this one.  And I have often said that the creation of such an economy is going to require nothing less than the sustained effort of an entire nation -- an all-hands-on-deck approach similar to the mobilization that preceded World War II or the Apollo Project.  And I also believe that such a comprehensive piece of legislation that is taking place right now in Congress is going to be critical.  That's going to finally make clean energy the profitable kind of energy in America -- legislation that will make the best use of resources we have in abundance, through clean coal technology, safe nuclear power, sustainably grown biofuels, and energy we harness from the wind, waves, and sun. 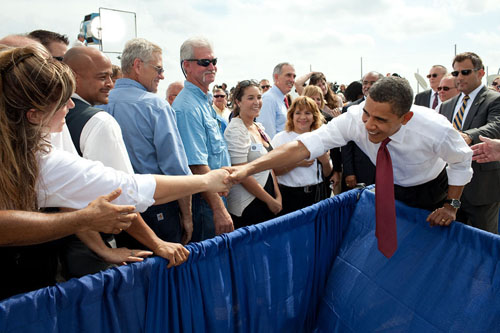 In short, Smart Grid technology will:

To read more about the smart grid, the newest American Reinvestment and Recovery Act initiative, read the full fact sheet.