The President on Retrofitting Buildings: "Here's What’s Sexy About It: Saving Money"

December 15, 2009 at 3:20 PM ET by Jesse Lee
Twitter Facebook Email
Summary:
The President explains why making buildings more energy efficient is "one of the fastest, easiest and cheapest things we can do to put Americans back to work while saving families money and reducing harmful emissions."
[[nid:7218]]

Yesterday the Vice President sent a memo (pdf) to the President demonstrating how the new foundation for a clean energy economy has been laid this year.  The memo is thorough and solid - take a look to get a shapshot of how the future will unfold as a result of the investments in the Recovery Act and the President's budget.

Today the President honed in on one element of that emerging clean energy job market, an element he announced a renewed focus upon during last week's speech at Brookings – retrofitting homes.  Speaking at a Home Depot, he described the focus as one of several "strategic surgical steps," explaining why this area of the economy is so well-fitted for an immediate boost that will help the economy as a whole turn around:

In our nation's buildings -- our homes and our office consume almost 40 percent of the energy we use and contribute almost 40 percent of the carbon pollution that we produce and everybody is talking about right now in Copenhagen.  Homes built in the first half of the last century can use about 50 percent more energy than homes that are built today.  And because most of our homes and office aren't energy-efficient, much of that energy just goes to waste, while costing our families and businesses money they can't afford to throw away.

The simple act of retrofitting these buildings to make them more energy-efficient -- installing new windows and doors, insulation, roofing, sealing leaks, modernizing heating and cooling equipment -- is one of the fastest, easiest and cheapest things we can do to put Americans back to work while saving families money and reducing harmful emissions.

As a result of a variety of investments made under the Recovery Act, including state and local energy grants, we're on pace to upgrade the homes of half a million Americans by this time next year -- half a million Americans:  boosting the economy, saving money and energy, creating clean energy jobs that can't be outsourced.  But this is an area that has huge potential to grow.  That's why I'm calling on Congress to provide new temporary incentives for Americans to make energy-efficiency retrofit investments in their homes.  And we want them to do it soon.

I know the idea may not be very glamorous -- although I get really excited about it.  We were at the roundtable and somebody said insulation is not sexy.  I disagree.  (Laughter.)  Frank, don't you think installation is sexy stuff?  (Applause.)  Here's what’s sexy about it:  saving money.  Think about it this way:  If you haven't upgraded your home yet, it's not just heat or cool air that's escaping -- it's energy and money that you are wasting.  If you saw $20 bills just sort of floating through the window up into the atmosphere, you'd try to figure out how you were going to keep that.  But that's exactly what's happening because of the lack of efficiency in our buildings.

So what we want to do is create incentives that stimulate consumer spending, because folks buy materials from home improvement stores like this one, which then buys them from manufacturers.  It spurs hiring because local contractors and construction workers do the installation.  It saves consumers money -- perhaps hundreds of dollars off their utility bills each year -- and it reduces our energy consumption in the process.

Get more on who the President spoke with before his remarks -- people representing every link in the chain for this sector -- in the White House background release. 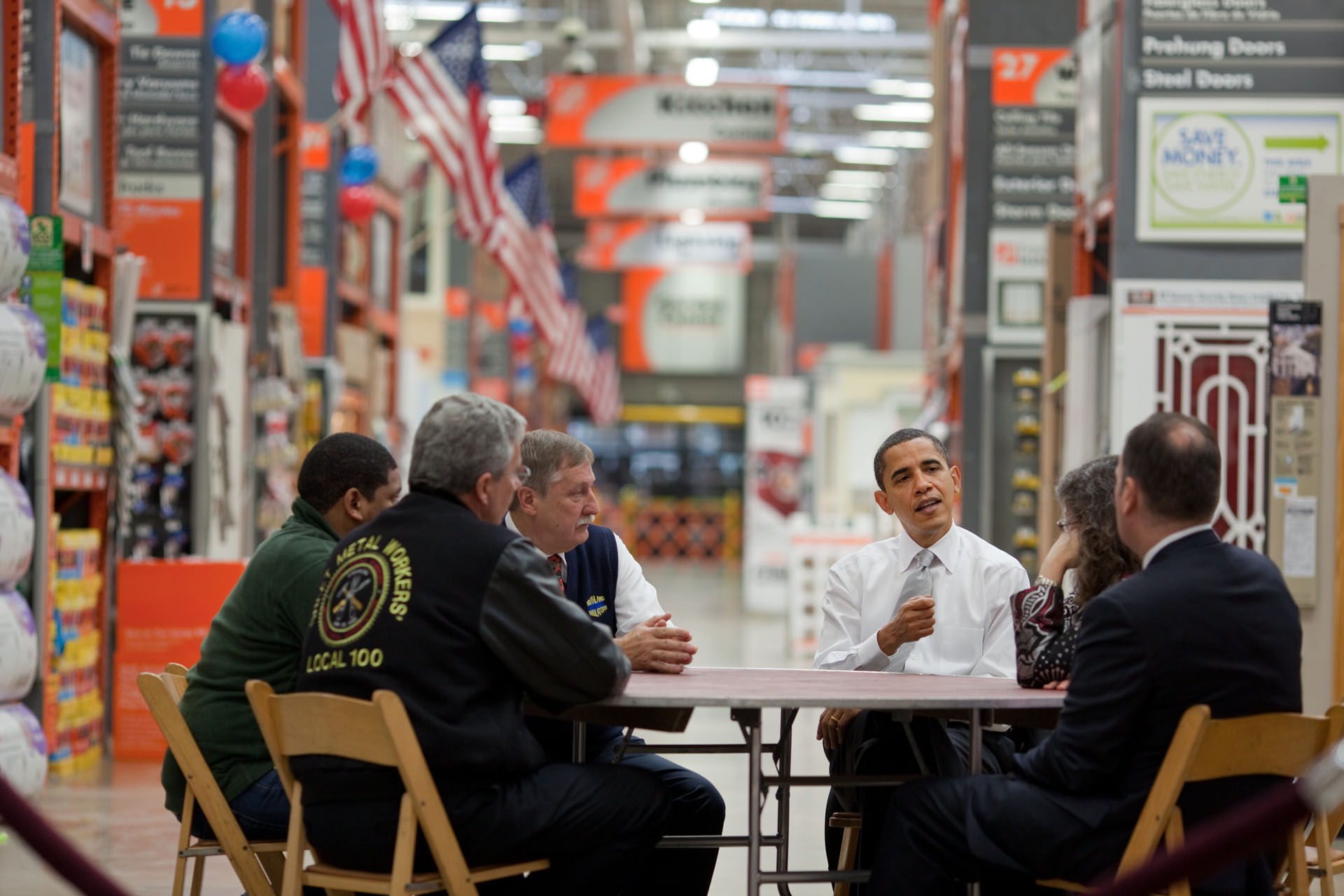