The rapid growth in health care spending in the U.S. in recent years has placed an increasingly heavy financial burden on individuals and families, with a steadily growing share of workers' total compensation going to health care costs. Because firms choose to compensate their workers with either wages or with benefits such as employer-sponsored health insurance (ESI), increasing health care costs tend to “crowd out” increases in wages. Therefore, recent rapid increases in employer-sponsored health insurance premiums have resulted in much lower wage growth for workers.

Recent data from the Bureau of Labor Statistics' "Employer Costs for Employee Compensation" (ECEC) survey can shed light on this issue. According to the ECEC data, workers' inflation-adjusted average total compensation per hour increased by 1.3 percent per year from 2000 to 2009 (from $26.23 per hour to $29.39 per hour in 2009 dollars)1  However, the annual growth rate of average wages and salaries during this period was much lower. More specifically, if one subtracts out the employee share of health insurance premiums2, workers' average hourly wage and salary compensation increased by just 0.7 percent per year from 2000 to 2009. As shown in the following figure, the corresponding growth rate in ESI premiums (including both the employer and employee share) was much higher at 5.1 percent per year. 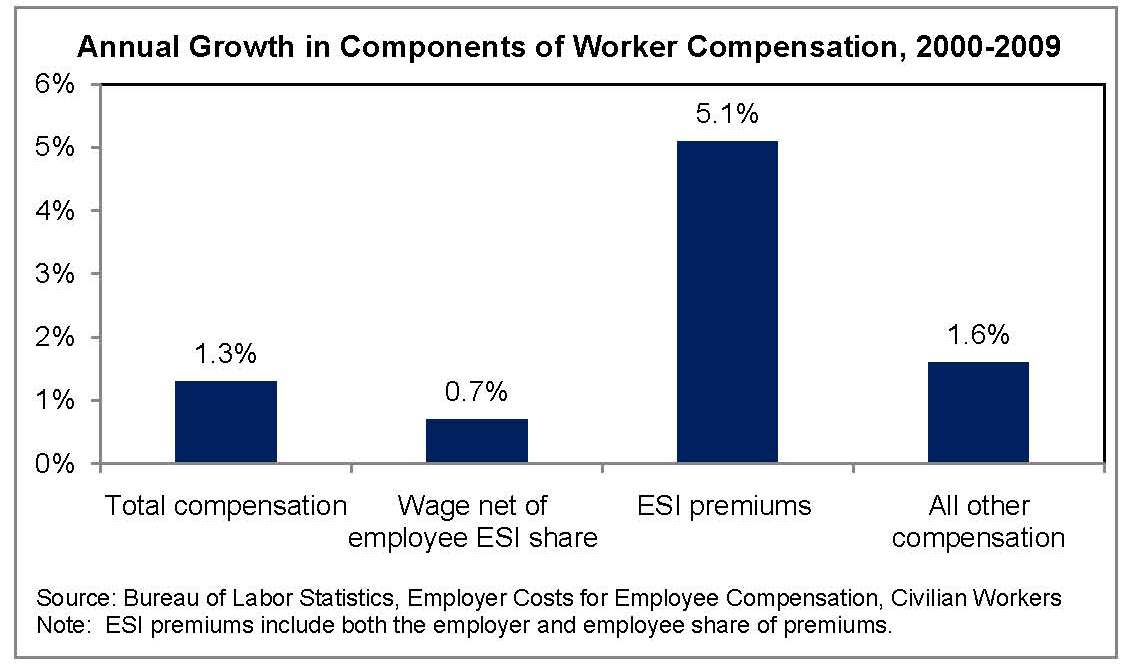 The increase from 2000 to 2009 in the average share of workers' total compensation going to ESI premiums is even more striking when one considers that a steadily declining share of workers and their dependents are covered by ESI. More specifically, according to the most recent data from the U.S. Census Bureau, the share of non-elderly adults and children covered by ESI fell from 68 percent in 2000 to 62 percent by 2008. This decline was to a large extent driven by a decline in the fraction of firms offering ESI to their workers, which fell from 69 percent in 2000 to 60 percent in 2009.3 Thus if one focused only on those firms that offered ESI during this period, the trends outlined above would be even more striking.

These trends, along with recent empirical research4 on this issue, make clear that increasing health care costs are reducing the wage growth of American workers below what it otherwise would be. The President's Proposal for health insurance reform would genuinely slow this growth in costs, allowing workers to enjoy more of the benefits of their productivity increases in the form of higher take-home wages.

2 The ECEC survey provides data on employer expenditures on ESI premiums. However, for most ESI plans, employees also contribute to the premium, thus effectively reducing their take-home wages. According to data from the Kaiser Family Foundation, the average employee share for single coverage increased from 14 percent in 2000 to 17 percent by 2009. During that same period, the average employee share for family coverage increased from 26 percent to 27 percent. Taking the unweighted average of the single and family share in each year yields an estimate of 20 percent in 2000 and 22 percent in 2009. One can then multiply the average amount spent per hour by the employer on ESI by 0.250 (the ratio of 0.20 and 0.80) in 2000 and by .282 (the ratio of .22 and .78) in 2009 to estimate the average amount spent by employees per hour on their ESI premiums. This average hourly employee ESI contribution is then subtracted from the hourly average wage and salary value. If one does not subtract out the employee ESI contribution, the annual growth rate in average hourly wage and salary compensation from 2000 to 2009 is similar at 0.8 percent, with average hourly employer costs for ESI premiums growing at 4.8 percent per year.