Meet the Women of the Administration: Kathleen Martinez

Following our first post on Under Secretary of Commerce for Economic Affairs Rebecca Blank, the second post in our Meet the Women of the Administration series features Assistant Secretary of Labor for Disability Employment Policy Kathleen Martinez. Read on to learn more about her path to becoming a disability rights leader and an inspirational member of the Administration!

How did your childhood influence you?
I come from a large family, and am proud of my Latino and Native American heritage. When I was eight months old, my parents, with limited education and English skills, feared for my future when they realized that I probably would never be able to see. Fortunately, I was mainstreamed in the public school system from kindergarten through high school. This experience made me realize early on that I would have to develop different strategies.

During my early years I encountered many instances of people struggling because of their differences. For example, even though my parents were both U.S. citizens, I have vivid memories of Immigration officials pounding on our door, demanding that my parents produce their birth certificates. I remember when we would go to meetings at my school and the administrators would speak very loudly to my mother because her English wasn't very good at the time. In addition, we lived very close to strawberry fields and orange groves in southern California and I became increasingly aware of the farm workers who worked in those fields. A student teacher in 8th grade read the book Sweatshops in the Sun by Ronald B. Taylor for me on tape. The book was about child labor on farms, and it profoundly influenced my awareness of working conditions in those fields just a couple blocks from my house. I soon became involved in the youth effort to improve conditions for local farm workers.

My childhood became the time when I realized that although I felt different, I had much in common with other kids. I loved to run and play, just like everybody else, yet I soon discovered that everybody else also had certain vulnerabilities that made them somewhat different, just like me. One classmate was picked on because she had freckles; another student was ridiculed because he had psoriasis. The commonalities helped shape my self confidence to reach out and communicate freely with people from all walks of life.

Growing up, who were your role models?
Five people greatly influenced my life. My mother became my first role model, because even though she didn't graduate from high school she absolutely exuded competence in every way. My dad became my second role model because he achieved sobriety, a significant and positive life-style change, later in his life. Witnessing this taught me that change really is possible even though sometimes we think it may never happen. Then Barbara Jordan, the first African American woman to become a Texas Congresswoman, influenced me because she was always blazing new trails through her powerful words. And because I have always been musically inclined, Joan Baez, with her distinctive vocal style and her recordings dealing with social issues, was a huge influence. Last, but certainly not least, I was influenced by Dr. Jacobus tenBroek who became blind as a teenager and went on to become an author, jurist, professor and founder of the National Federation of the Blind. From him I learned that people with disabilities should speak for themselves and not have others speak for us -- after all, we know best what we need. 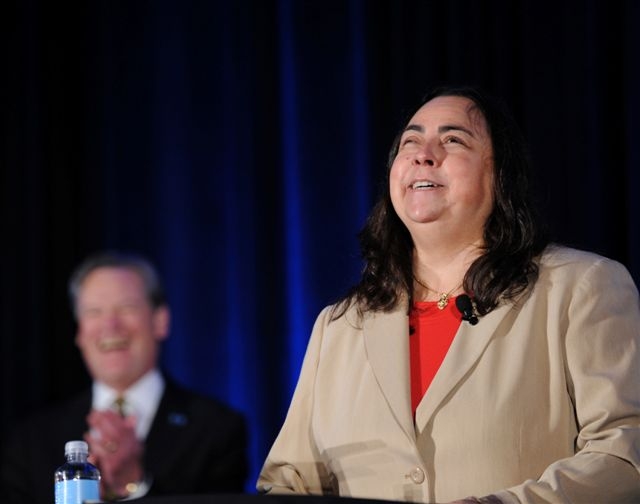 How did you become interested in working for the federal government?
In 2002, I was appointed by President Bush to the National Council on Disability, an independent federal agency advising the President and Congress on disability policy. During this time, I realized the breadth of influence the federal government has over our everyday lives and that if I were in federal service I could have a broad impact on laws and policies that could improve employment opportunities for people with disabilities like myself.

What inspired you to pursue your field of interest?
Through my work, both nationally and internationally, I have seen people turn adversity into opportunity. Good jobs for people with disabilities serves as the gateway out of the poverty trap allowing us to contribute to the economy and strengthen our nation.

What keeps you motivated?
I am motivated by knowing that in some small way I have been able to influence the lives of others -- encouraging them to not be discouraged, to try and to work very hard, to reach for their dreams, to be creative, and to turn adversity into success.

What has been your favorite moment since you’ve been working at the Department of Labor?
My favorite moment surrounds a six-city listening tour I have just completed with other federal partners. The purpose of the tour was to hear first-hand from the public on what they think the disability priorities for the Obama Administration should be. During these sessions I realized the power that collaboration brings to making a difference in people's lives and it was clear to me that the people providing comments to us believed that too. I realized that by hosting these listening sessions we had given a voice to a huge cross section of our constituency which includes people with disabilities, family members, service providers and allies from the public and private sector. What gave me the greatest hope was that many of these people have not in the past identified themselves with the traditional disability community, yet during these sessions they came forward for the first time.

What is exciting about your work?
What excites me most about my work is knowing that I am part of Secretary Solis’ vision of Good Jobs for Everyone. My approach in supporting this vision is inclusion -- a multi-faceted approach to weave disability into the fabric of employment in America.

How do you balance work and family life?
Since I was confirmed, I have been working extremely hard to accomplish as much as possible during the time granted me under this Administration. On the other hand, I value time with my family and friends. I love music and I love to read, go to museums, and attend cultural events. Also, I am trying to become a bit more health conscious and am beginning to walk more. Even though I have found the right "balance" somewhat elusive, I’m constantly working on it!