"The Right Thing to Do"

May 18, 2010 at 2:37 PM ET by Jesse Lee
Twitter Facebook Email
Summary:
The President talks jobs and the economy in Youngstown, OH, looking back at the actions that had to be taken to turn the economy around and rebuking Republicans who sat on the sidelines.
[[nid:12289]]

This afternoon the President visited Youngstown, Ohio to tour V&M Star Steel, a company that’s adding hundreds of jobs in part due to investments form the Recovery Act. As Congressman Tim Ryan, who represents the area, explained earlier, Youngstown has had some tough times like a lot of America, but also like a lot of America has started to see some rays of hope. 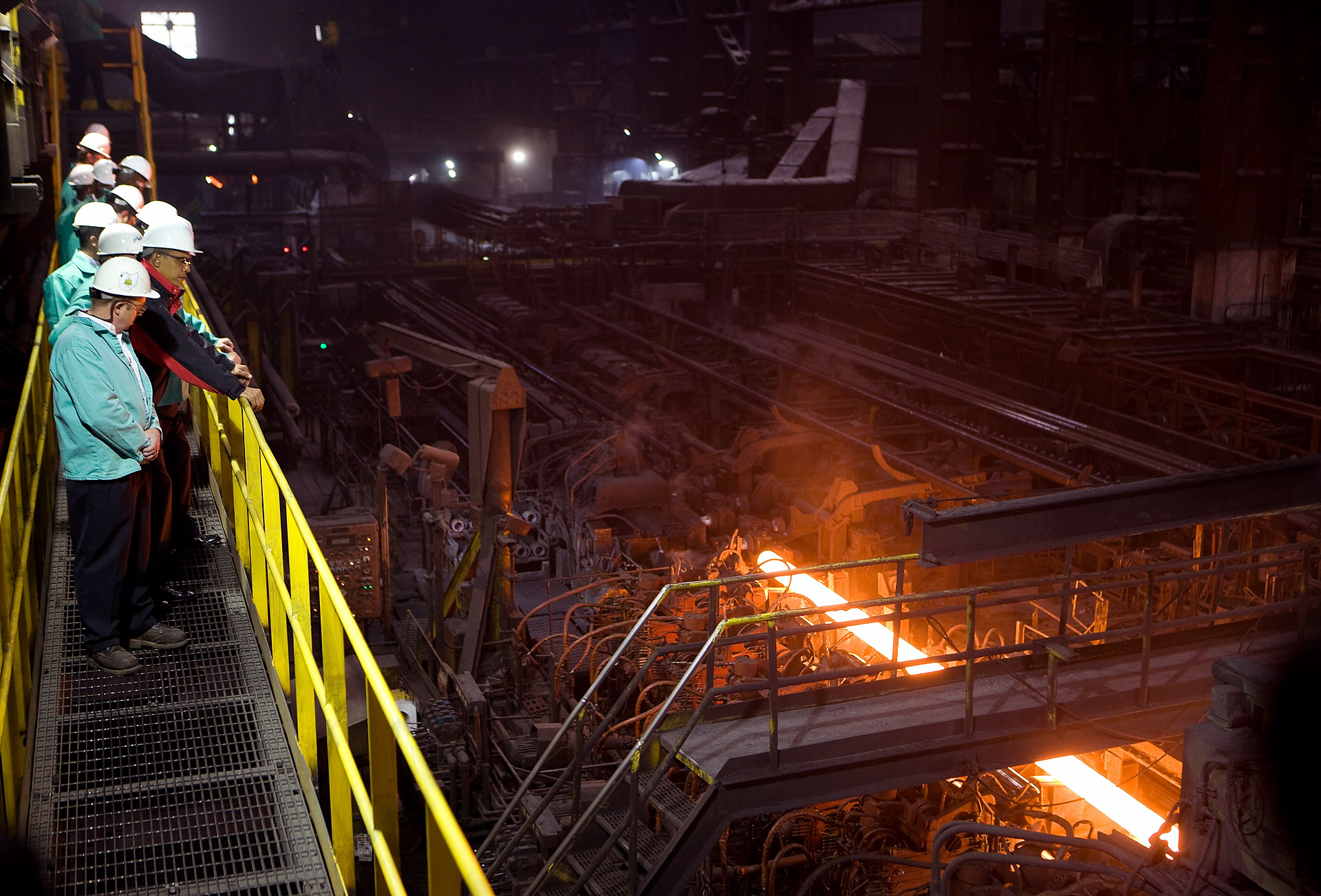 Speaking to Youngstown workers afterwards, the President took a moment to look back at a tough year and the actions that had to be taken to turn the economy around from losing 750,000 jobs the month he came into office to gaining 250,000 last month. And to Republicans who to this day “look for the cloud around every silver lining,” the President gave them no congratulations for having sat on the sidelines while Americans struggled:

So we had to make a choice: We could sit back, do nothing, make a bunch of excuses, play politics, and watch America’s decline -- or we could stand up and fight for our future.

And I ran for President, Youngstown, because I believe that we’re at a defining moment in our history.  And if we’re going to keep the American Dream alive -- not just for us, but for the next generation -- then we couldn’t just sit back and put off solving these big problems.  We had to tackle them head on.

Job one was rescuing our economy.  And that required some steps that were, frankly, unpopular -- steps like stabilizing a financial system that was on the brink of collapse, and intervening in an auto industry that was on the brink of extinction.  I knew those steps would be unpopular.  Even in Ohio, even in Michigan, even in auto-making states, if you polled, people said, don’t do anything about the auto companies.  And I knew politics being what it is, that some people would try to score political points off our decisions.

But I think it’s fair to say -- any fair-minded person would say that if we hadn’t acted, more people in the Valley, more people in Ohio, more people across America would be out of work today.  I mean, I can just give you a very concrete example -- the GM plant over in Lordstown would not be there.  Because GM would have liquidated.

Instead, GM is paying back its debts, turned a profit for the first time in three years, and a third shift is about to come back to work in Lordstown, putting that plant at maximum capacity.  (Applause.)  Right next door.  (Applause.)  And by the way, it was in part because of the decisions that these three guys made in Congress.  That’s not easy.  They’ve been knocked -- they’ve got bumps all over the backs of their heads -- some on top.  (Laughter.)  But it was the right thing to do.

Today my administration is announcing a landmark agreement to help dozens of communities like Youngstown revitalize and redevelop old, shuttered GM facilities, preparing them for new industries, new jobs, and new opportunity.

It was the right thing to do to extend unemployment benefits and make COBRA cheaper for people caught up in the recession until they could get back on their feet.  There’s probably not a single person here who doesn’t know somebody who either got unemployment benefits or used COBRA to make sure they could keep health insurance for their families when they lost their job.  That was the right thing to do.

It was the right thing to do to help governors like Ted avoid massive cuts to Medicaid and layoffs to teachers and police officers. 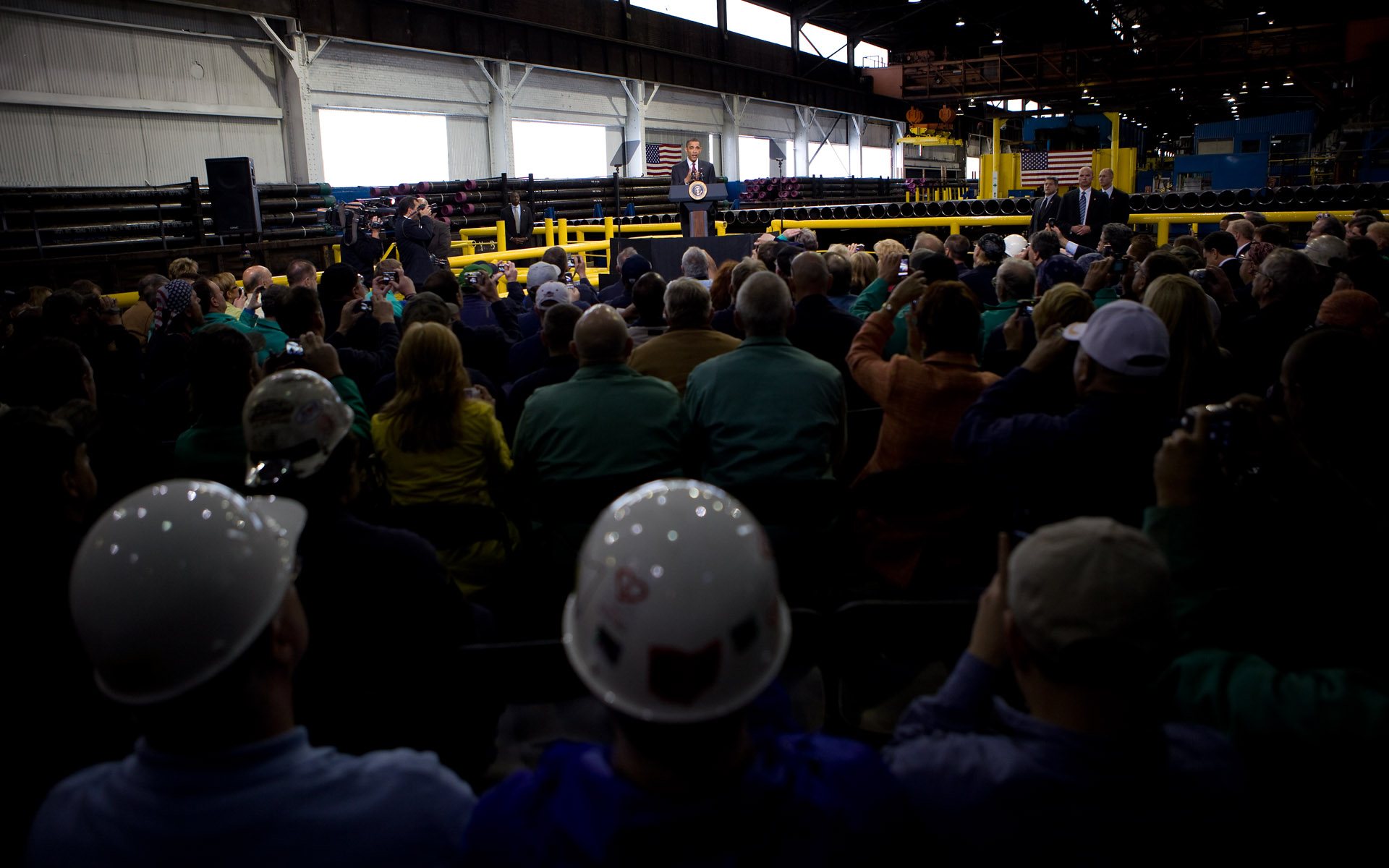 President Barack Obama delivers remarks on jobs and the economy to workers at V&M Star, a manufacturer of steel products, in Youngstown, Ohio, May 18, 2010. (Official White House Photo by Lawrence Jackson)

The President went on to talk about what would have happened if the "just say no" crowd had succeeded inblocking all these efforts:

The steady progress we’re beginning to see across America would not exist.  And neither would the plant that you’re about to build.  So I invite anybody who thinks we shouldn’t have taken those actions that we took last year, or made those investments, to come to Youngstown and explain to us why that plant shouldn’t be built.  (Applause.)

Come talk to Ted Strickland and the mayor.  Come tell us why companies like this in towns like Youngstown shouldn’t be given every chance to expand and add new jobs.  Tell us why small businesses shouldn’t receive tax credits so they can help purchase health insurance for their employees.  Explain why seniors shouldn’t get help paying for their medications when they hit that gap called the doughnut hole.  Explain why we should tell families that children with preexisting conditions aren’t going to be able to get health insurance because we decided that insurance companies should be able to do whatever they want.

They need to explain why they would be nothing to make -- doing nothing to solve some of these problems that have been plaguing America for years now, decades.

So I’m here to say, that’s not how we deal with crises.  That’s not what America is about.  We did not become the greatest economic power that the world has ever known by avoiding problems.  The United States of America does not play for second place.  We step up.  We face our challenges.  We compete.  And we win.  And that’s something we should all agree on.  (Applause.)