July 14, 2010 at 1:57 PM ET by Christina Romer
Twitter Facebook Email
Summary:
New report finds that the Act has had a substantial effect on output and employment, is leveraging private capital, and making important investments in the future productivity of the country.

As part of the unprecedented transparency and accountability provisions of the Act, the CEA provides a report to Congress about the Act each quarter.  In the Fourth Quarterly Report  released this morning, we not only find that the Act has had a substantial effect on output and employment, but that it is leveraging private capital and making important investments in the future productivity of the country.

Congress designed the Recovery Act both to begin spending out quickly and to provide crucial support to the economy over a two-year period.  It has met and is continuing to meet these goals.  The state fiscal relief, payments to seniors, and the emergency unemployment insurance benefits went out almost immediately, and started aiding the economy in the spring and summer of 2009.  The tax cuts also went into effect immediately, but it has been during tax season (the first two quarters of this year) that many Americans have seen concrete signs in the form of reduced tax payments and increased tax refunds.  In previous CEA Recovery Act reports, we have highlighted the state fiscal relief  and the tax cuts and income support provisions  of the Act, and found evidence of their effectiveness.

In today’s quarterly report, we highlight the public investment spending in the Recovery Act.  This is the project spending that not only creates jobs in the short run, but leaves us with an expanded and improved ability to create high-paying jobs in the future.  The Recovery Act includes $319 billion of public investment on everything from basic infrastructure such as roads and bridges to twenty-first century infrastructure such as a smarter electrical grid and universal broadband.  It invests in community health centers, health information technology, education, and job training to improve the health and skills of our citizens -- our human capital.  And, it makes unprecedented investments in basic scientific research to enhance innovation and so help retain our competitive edge.  All of these investments will help increase the long-run productivity of our economy and the standard of living of ordinary Americans.

The public investment components of the Recovery Act were always expected to spend out more gradually, because they typically require planning and are often awarded through a rigorous competitive process.  But as of the end of June, roughly two-thirds of the public investment funds included in the Act had been obligated, and more than $86 billion had been outlayed.  Public investment outlays increased by more than 50 percent between the first and second quarters of this year, which explains why the Vice-President has named this summer the “Summer of Recovery.”  As the other stimulus in the Recovery Act gradually winds down over the next few quarters, the public investments will continue at a rapid pace, providing continued support to the economy. 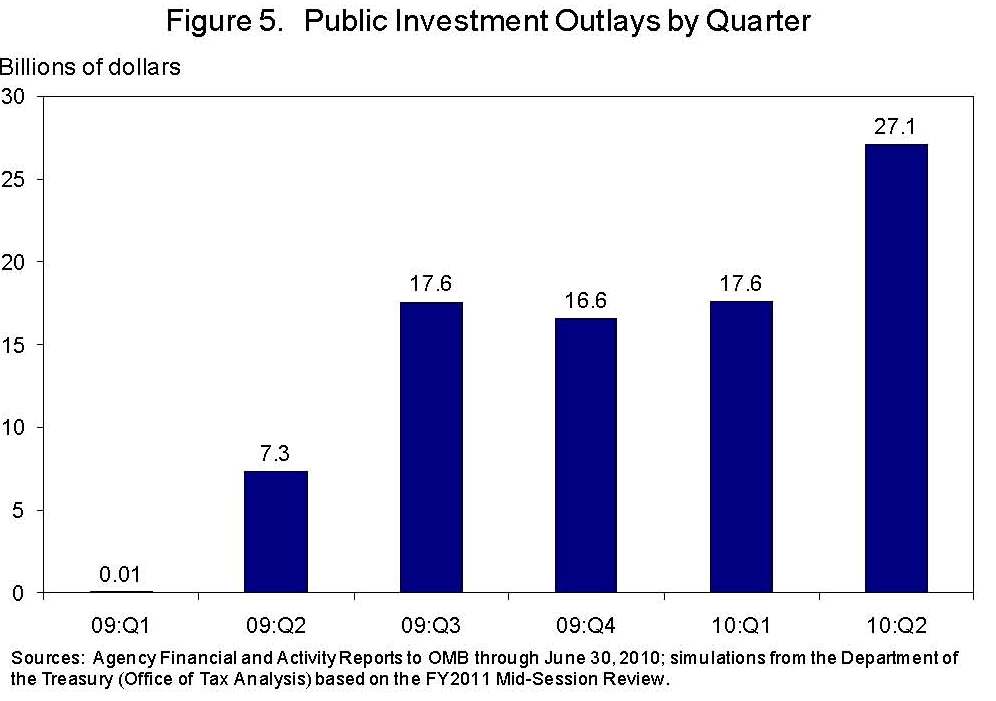 Leverage Provisions of the Act.

An innovative feature of the Recovery Act is its focus on partnering public investment with private and other funds.  Much of the Recovery Act investment spending takes the form of matching grants, loan guarantees, interest subsidies, and tax incentives that support and encourage outside investment.  For example, the 48C Advanced Energy Manufacturing Credit gives private firms that pass the Department of Energy’s competitive process a 30 percent tax credit for their investments in factories to produce solar panels, wind turbines, and other clean energy products.  The Broadband Initiatives Program provides grants and loans to firms and regional authorities to bring internet access to rural communities.  And, the Build America Bond program subsidizes the interest cost of state and local government borrowing for schools, transportation, and other vital projects, so that these entities are encouraged to invest in local infrastructure. 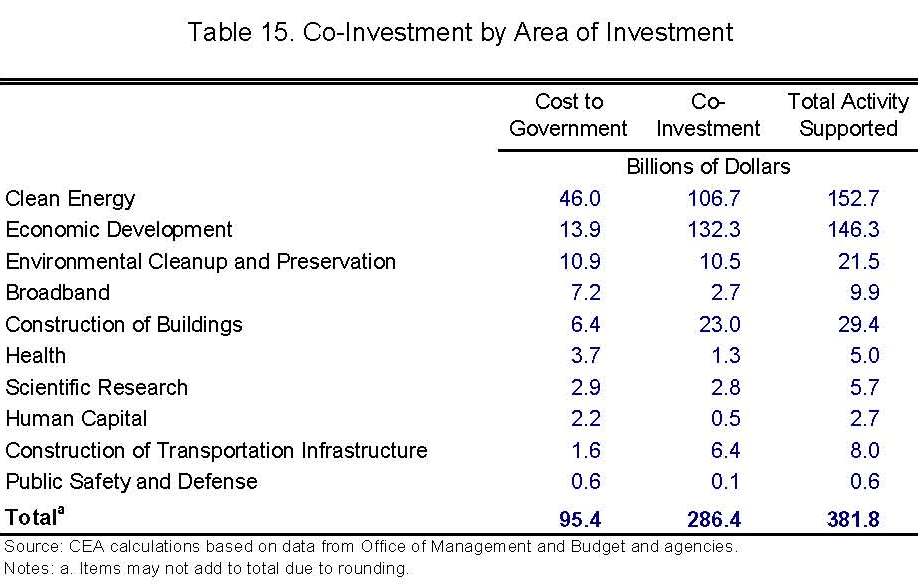 In our report, we estimate the impact of the Recovery Act on job creation in two ways.  Our model-based approach uses multiplier estimates similar to those used by the Congressional Budget Office to estimate how the Recovery Act tax cuts and outlays to date likely translate into employment effects.  This approach indicates that the Recovery Act has raised employment relative to what it otherwise would have been by 2.5 million jobs as of the second quarter of 2010.  The projection approach uses statistical procedures to project the likely path of employment based on the information available through the end of the first quarter of 2009.  This yields a substantially larger number:  it suggests that employment as of the second quarter is 3.6 million higher than it otherwise would have been.  By this estimate, the Recovery Act has met the President’s goal of saving or creating 3.5 million jobs -- two quarters earlier than anticipated.

Our review of a wide range of other estimates of the employment effects of the Act shows that our model-based estimate is similar to that of outside experts.  There is obviously a great deal of uncertainty around any jobs estimate.  But, our compendium of outside estimates shows that respected analysts across the ideological spectrum, as well as the non-partisan Congressional Budget Office, agree that the Act has had a significant beneficial effect on employment and output over the past year.