President Obama Pushes "Made in America" to Boost Recovery

August 6, 2010 at 1:11 PM ET by Jesse Lee
Twitter Facebook Email
Summary:
Speaking on the latest jobs numbers, the President had words for Republicans who have been relentlessly blocking any measure to give the economy another boost: “We need to do what’s right, not what’s political – and we need to do it now.”
[[nid:19316]]

Speaking on the latest jobs numbers this morning, the President had words for Republicans who have been relentlessly blocking any measure to give the economy another boost: “We need to do what’s right, not what’s political, and we need to do it right now.”

The audience was made up of workers at Gelberg Signs, a small business in DC that’s currently hiring new workers and making new investments in their technology thanks in part to two Small Business Administration loans.   It’s the kind of business that helped private employment grow for the seventh straight month just a year after the economy seemed to be falling off a cliff.

But while the worst kind of disaster may have been averted, and the approximately 3 million jobs the Recovery Act was responsible for have brought us back from the brink of another Great Depression, the President has also been consistent that more needed to be done.  And for those who have been stalling job-creating initiatives in Congress, the President gave them a fresh sense of urgency.

And that’s why I welcomed the news earlier this week that after a lot of partisan bickering and delay, the Senate passed a bill that will not only keep at least 160,000 teachers in the classroom this fall who would otherwise be out of a job, but will help states avoid making other painful layoffs of essential personnel, like police and firefighters.

One of the areas where we’ve been losing jobs even as we’re gaining in manufacturing has actually been in state and local hiring, because their budgets have been plummeting.  All the city council members are nodding here.  And so this bill will help.  Speaker Pelosi said she’s going to bring the House back in session to pass this bill and as soon as they do, I’m ready to sign it into law.  (Applause.)

On the clean energy economy:

We’ve also got to look at industries of the future.  And that’s why we’re investing in a clean energy economy with the potential to create hundreds of thousands of jobs across the country by spurring two private sector dollars for every tax dollar we invest, strengthening our economy at the same time cleaning up our planet and making all of us more secure in the process.

And on help for small business:

So the small business jobs bill that’s being debated in Congress right now would not only extend these successful policies, but the bill would also more than double the size of the loans that small businesses like Gelberg Signs can take out.  It would create new small business lending funds to unlock credit for entrepreneurs.  It would provide new tax cuts to small businessmen and women who want to accelerate investment in their companies and in our economy.

This is the right thing to do.  We want Gelberg Signs not just to hang on -- we want you guys to thrive and to grow and to hire more and more workers.  (Applause.)  And you know you create a great product.  You know you provide great service.  You stand behind what you do.  But sometimes it’s hard to get financing; sometimes you need some help in terms of cutting your tax burden.  That's what this bill does.

And yet, a minority in the Senate is standing in the way of giving our small businesspeople an up or down vote on this bill.  And that’s a shame.  These kinds of delays mean contracts are being put off, debts are adding up, workers are going without a job –- and we can’t afford it.  We need to do what’s right, not what’s political, and we need to do it right now.  (Applause.) 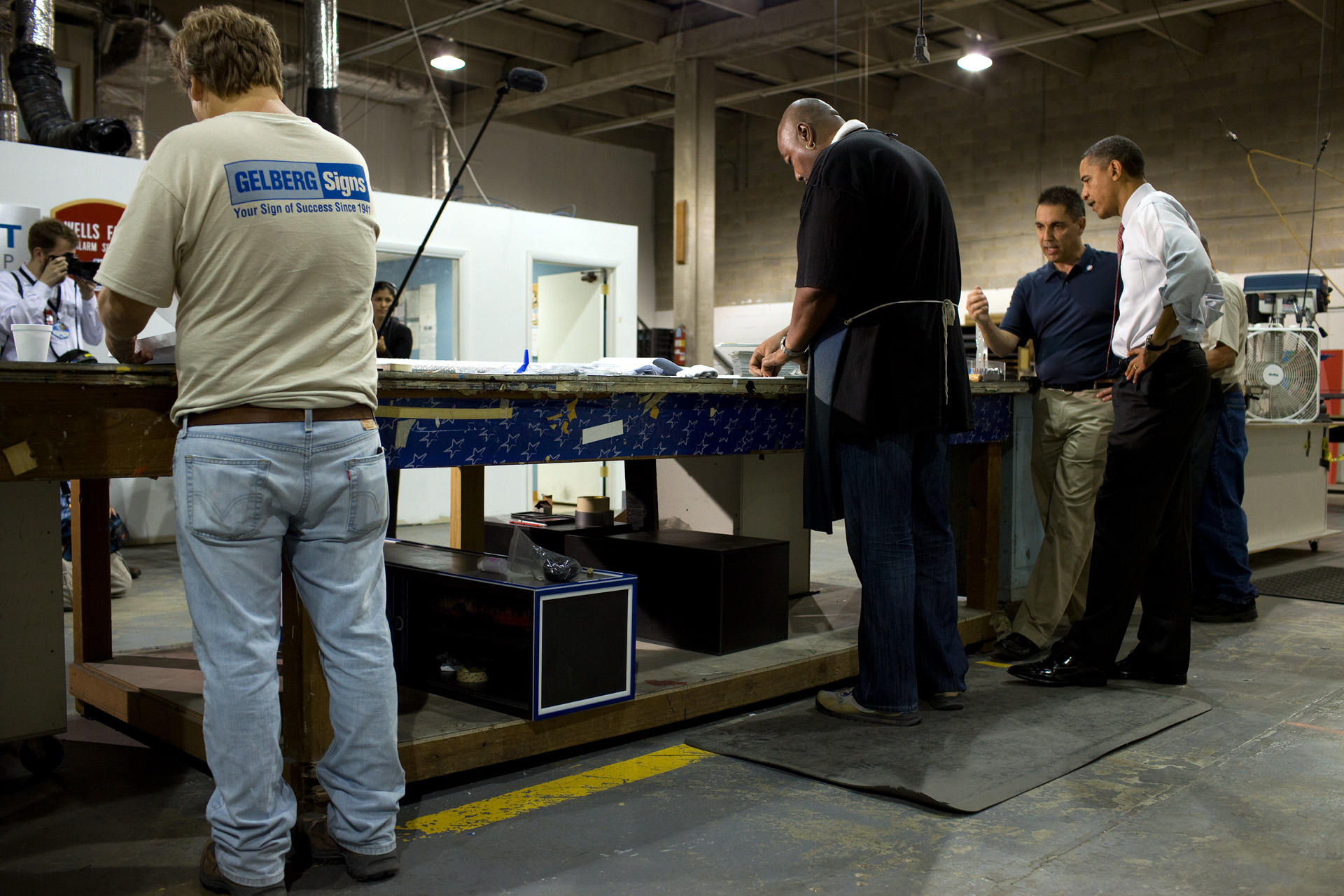