Labor and Management Working Together For Student Success

February 18, 2011 at 12:33 PM ET by Maureen Tracey-Mooney
Twitter Facebook Email
Summary:
Education reform is only possible with the cooperation of both teachers' unions and administrators. Read about how Secretary of Education Arne Duncan is helping to bring both sides together.

School reform is often portrayed as an unavoidable conflict between labor (teachers) and management (superintendents and principals).  Well, earlier this week I joined a conference of local teachers’ union presidents, school district superintendents and school board presidents that are working together to make important inroads against that conventional wisdom.

These educators represent 150 school districts, and they came together to talk about how to use labor-management collaboration to improve student achievement and transform schools. Each participating district was required to bring each of these kinds of leaders, so that all the decision makers were at the table. Even more, in order to be selected each team had to commit to continuing this work beyond just a few days in Denver, pledging to address tough issues like evaluation, professional development and top to bottom accountability.

Too often we talk about what divides teachers and school district leadership. This conference, called by the Department of Education and co-sponsored by the national organizations of many of the stakeholders represented, showed the enthusiasm for this kind of collaborative work. In some places, collaboration between labor and management on these issues has been working for years or even decades, sometimes at the very cutting edge of reform. At the conference, I got to hear many of the stories, too often not told, of this kind of successful work between school districts and unions. 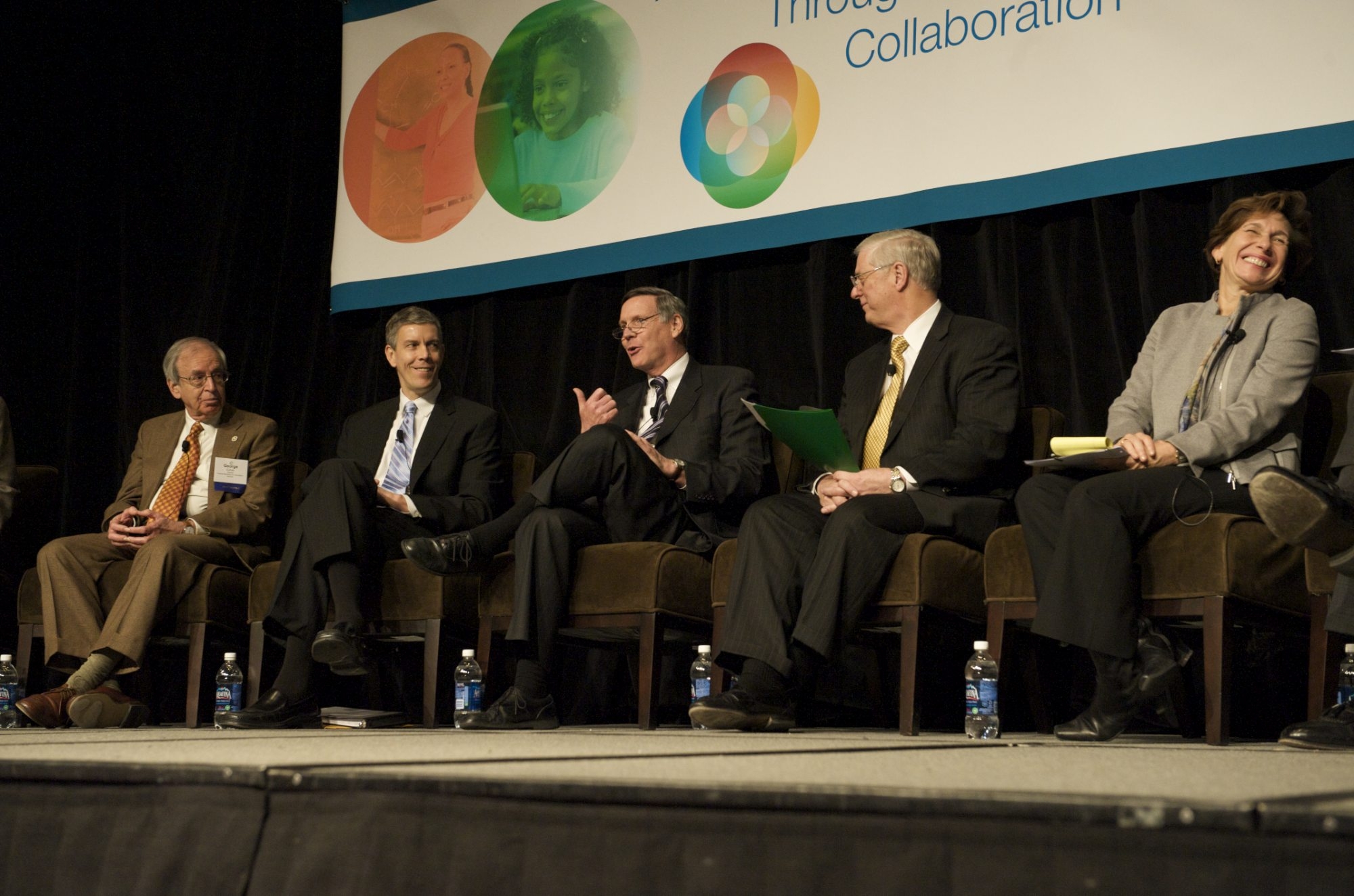 Secretary of Education Arne Duncan participates in a panel with heads of some of the conference’s co-sponsors: George Cohen, Director of the Federal Mediation and Conciliation Service; Michael Casserly, Executive Director of the Council of the Great City Schools; Dennis Van Roekel, President of the National Education Association and Randi Weingarten, President of the American Federation of Teachers. Denver, Colorado, February 18, 2011. (by Department of Education)

The team from Montgomery County Public Schools, in Maryland, was particularly inspiring. While Montgomery County has historically been a wealthy community, a decade ago the district saw that the county had become highly urbanized, with the county as a whole becoming a majority minority community. Schools were divided into two de facto districts: one very wealthy set of schools with good student performance and one very poor set of schools with low student achievement. In response to this inequity, a broad team of district leadership – including labor (representing teachers, support staff and administrators), the superintendent and the school board began to put in place a plan to close the achievement gap in their district. The group met every two weeks to make decisions together about the budget and school policies, so every member of the team had a full understanding of where there were resources (and where there were not).

This team gradually put into place a professional growth system for teachers, administrators and support staff, with the aim of improving performance at all levels of the district. For teachers, the evaluation system is focused on improving teaching, with a year of evaluation – which includes student data -- followed by two years of targeted professional development. Evaluation is used not as a tool to punish teachers but to improve teaching and student performance. As a result of these growth opportunities for support staff, the district has seen 454 support staff move into careers as teachers or supervisors.

Their work is achieving results. In 2000, Broad Acres Elementary School, the highest poverty school in the district, was also the lowest performing elementary school. The district and the unions together designed a plan to transform the school, including training, teachers working together in teams and teacher leadership. In just three years, Broad Acres Elementary went from being one of the worst performing schools in the district, to having student achievement levels on par with schools serving far wealthier parts of the county.

Another powerful example was ABC Unified School District in Los Angeles County.  In response to a 1993 teacher strike, the local teachers union and ABC Unified decided they had to find a better way, and began the difficult discussions necessary to forge a partnership.  The partnership has particularly focused on teacher recruitment and retention and funding teacher-selected, school-specific, research-based instructional programs. Their work together is yielding results. Every year since the partnership began, the district’s score on California’s Academic Index has increased. In a district with 41% of students on free or reduced priced meals, the graduation rate is 89%, well above the national rate of 74.9%.

The trust built by this partnership has also created the space for additional needed reforms. One middle school in the district was recently identified as eligible for the Department of Education’s School Improvement Grant funding, which helps fund transformations at the nation’s 5% lowest-achieving schools.  In accepting the grant, 100% of the teachers within the school voted to move to a system where student achievement would become part of the teacher evaluation and compensation – something ABC Unified had not previously done.  Recognizing this choice could bring needed resources to students and teachers, the partnership supported this as an opportunity for improvement, rather than as an aberration to be blocked.

All these achievements for students were brought about not by telling teachers what to do but by giving them a seat at the table. As Secretary Duncan has said, “When folks build trust, when everyone moves outside of their comfort zones, collective bargaining itself can be a tool for positive change, rather than a tool to maintain the status quo. That's the kind of forward thinking we need.”

This week’s conference lifted up great examples of districts where management and teachers unions are working together to turnaround schools. The partnerships on display at the conference prove that progress is being made through collaboration.  In fact, some of the best outcomes come when teachers, staff, principals, superintendents and school boards collaborate together. Too often that’s not the story that gets told. The Middle Class Task Force will continue to lift and highlight these successes.

For more information on this week’s conference, go to http://www.ed.gov/labor-management-collaboration/conference.

Maureen Tracey-Mooney is Senior Policy Analyst in the Office of the Vice President.