A Celebration of Cesar Chavez at the White House

April 1, 2011 at 4:01 PM ET by Stub, Stephanie Valencia
Twitter Facebook Email
Summary:
White House officials, Cabinet Secretaries, and the children of the late Cesar Chavez mark what would have been the civil rights leader's 84th birthday.

At the White House, historic days happen quite frequently, but Wednesday marked an especially profound day as individuals from across the nation came to the Eisenhower Executive Office Building to honor the life and legacy of one of the greatest civil rights leaders of our time: Cesar Estrada Chavez, marking what would have been his 84th birthday. 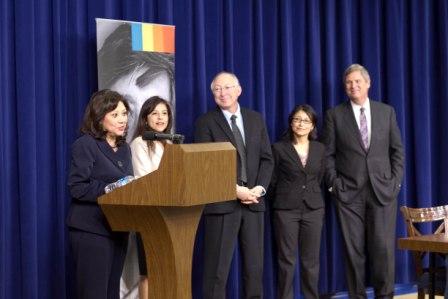 Secretary of Labor Hilda Solis, Secretary of the Interior Ken Salazar and Secretary of Agriculture Tom Vilsack joined members of the Chavez family, including Cesar’s granddaughters Julie Rodriguez and Christine Chavez, who now serve in the Obama Administration.

The event was an opportunity to reflect on the past, take stock of where we are in the present and look toward the future and how much work we still have before us.  After welcoming remarks from White House Director of Intergovernmental Affairs Cecilia Muñoz and the three Cabinet secretaries in attendance, Christine Chavez introduce the film  “Common Man, Uncommon Vision: The Cesar Chavez Story,” which chronicled Cesar’s life and the history of the farm worker movement.  As the film ended, many in the audience stood and began an impromptu farmworker clap – and  you could feel Cesar’s energy in the room.

Then Julie Rodriguez led a panel discussion with the Cabinet Secretaries discussing how Cesar’s legacy is carried on each day by the work of their agencies and how he has inspired them and their work.  Secretary Salazar cited the work he does day in and day out to preserve the history of our nation and how he recently dedicated the 40 Acres at Delano -- where the farmworker movement was born -- as a national historic landmark.  Secretary Solis talked about how the Department of Labor works every day to protect the rights and dignity of all workers.  And Secretary Vilsack provided inspiring words about the importance each of us has to change the world – reminding us, that Cesar was just one man that started a movement that changed the lives of many, and that each and everyone one of us has that same power.

It was clear from those that joined us yesterday – from the students who left knowing more about our history; to the people who worked with and  marched with Cesar years ago; to the farmworkers that travelled from California who are continuing his work today – that Cesar’s unwavering dedication  and tireless work on behalf of such a vulnerable group of people – continues to this day to have an impact on so many.