April 1, 2011 at 10:31 AM ET by Haoxuan Wang
Twitter Facebook Email
Summary:
Haoxuan Wang, age 17, was a participant in the New York City Science and Engineering Fair this week when President Obama dropped by. He took some time out from doing his extraordinary research to share his story with the White House blog.

Editor’s Note: Haoxuan Wang, age 17, was a participant in the New York City Science and Engineering Fair this week when President Obama dropped by. You can see him shaking the President’s hand here. Also, part of this week's West Wing Week features the NYCSEF. 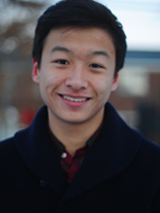 On Tuesday, I was at the American Museum of Natural History to exhibit a project I am working on in the Final Round of the New York City Science and Engineering Fair (NYCSEF), the largest high school research competition in New York City.  As a high school student, I have experienced firsthand the effects of cancer when I witnessed several members of my family lose devastating battles with it.  It made me wish that doctors today had better tools and drugs to fight this terrible disease. This experience is part of what fuels my desire to do this research.

The goal of my science project is to develop a new imaging tool to visualize the interaction between different kinds of cells within the cancer micro-environment, in response to hypoxia (low oxygen).  I was able to demonstrate at single cell resolution that hypoxic tumor cells migrate and associate with blood vessels, thereby contributing to their invasion into the blood stream. This project was selected to compete in the Final Round of NYCSEF. My eventual goal is to win a seat to represent NYC at the International Science and Engineering Fair Finals in Los Angeles, California!

But on Tuesday, when I arrived at the museum for the science fair, something felt different.  Security was tighter than I thought it would be.  Some fellow students and I wondered whether to expect an important visitor.  Once some kids mentioned that President Obama was in the city for an event at the United Nations, we started to speculate! Buzz continued to grow that President Obama or the First Lady would be present at the science competition as we saw more and more Secret Service officers on the premises.  Our suspicions were further amplified when security increased as the event drew to its closing hour.  Finally, President Obama came out to the main floor of the Milstein Hall of Ocean Life with Mayor Bloomberg at his side!

All the student researchers and staff got very excited and started to clap.  After making a short speech, the President walked to us and spoke with my classmate, a Bronx Science student, Max Kiss, about a project on the bamboo bicycle he made.  I heard Max tell the President that “I've been riding it to school for at least two years.” The President made a joke, “What, they wouldn't let you bring an actual bike?” We were so amazed by his sense of humor. The President then shook hands with us and told us that he’s very proud of what we accomplished.

Taking time from his busy schedule to visit a local science fair, the President clearly showed how critical he thinks science, technology, and engineering are to our future. My friends and I all felt our efforts have been rewarded, and we are inspired to keep working hard and stay focused on our goals. The President's focus on science, technology, engineering, and math education acts as motivation to young students like me to start researching topics they are curious about.

I am studying science in order to tackle the challenges of the future, and the President makes me feel that what we are doing really is important.