What I Heard About Energy Policy through Advise the Advisor

April 22, 2011 at 12:58 PM ET by Secretary Steven Chu
Twitter Facebook Email
Summary:
Secretary of Energy Steven Chu responds to your Advise the Advisor comments on how we should meet President Obama's goal of reducing our imports of oil by one third in a little over a decade. 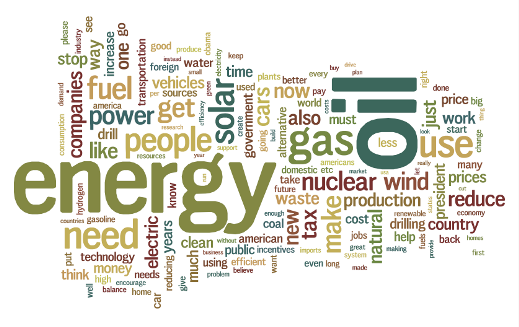 A word cloud of feedback from the Advise the Advisor program gives greater prominence to words that appear more frequently in your feedback (by Wordle.net)

Earlier this month, I asked the public for feedback on energy policy as part of the White House’s “Advise the Advisor” program.  Specifically, we asked for your comments and ideas about President Obama’s goal of reducing the amount of oil we import by a third in a little over a decade, along with the need to both increase our domestic energy production and reduce energy waste.

Thousands of you offered suggestions on how we can be more efficient and rely more on America’s clean energy resources.  Here is a summary what we heard from you:

Many of you responded that we need to increase the amount of energy we produce here at home.  Some respondents said that we have to do this without disrupting the environment. Lee from New Mexico said:

The Obama Administration is developing incentives to encourage the timely development of oil and gas resources from existing and future leases.  According to a Department of Interior report, 57 percent of all leased onshore acres and 70 percent of offshore leased acres are neither being explored nor developed.  Taxpayers have a right to expect that companies given access to public lands for oil and gas development will develop the resources efficiently or step aside to allow other companies to do so, and we will provide both carrots and sticks to encourage oil companies to act.

When it comes to America’s energy future, the continued production of oil and gas from America’s domestic resources is a vital part of our energy solutions. We have already made progress: Last year, oil production rose to its highest level in seven years. At the same time, we need to ensure that we harness these resources safely and responsibly.

Many respondents emphasized the need to increase the fuel efficiency of our vehicles to reduce our reliance on foreign oil. Margaret from Texas said:

Push hard on fuel efficiency in new vehicles -- that's the easiest way for consumers to improve automotive fuel efficiency. Push harder on industrial fuel efficiency -- that should inspire innovation to reduce fuel use. Efficient is better than cheap in the long run.

Increasing fuel efficiency is critical to breaking our dependence on oil and securing control of our energy future. Last year, the Obama Administration announced ground-breaking fuel efficiency standards for cars and trucks that will save consumers money while reducing oil consumption by 1.8 billion barrels.

In addition to improving vehicle efficiency, we are also working to reduce oil dependence by promoting electric vehicles, developing advanced biofuels and encouraging the use of natural gas vehicle fleets.

To build a clean energy future, we also need to make our homes and businesses more energy efficient.  Peter from New York said that the federal government can help by:

Continuing to offer tax breaks for the installation of energy efficient appliances in homes and small businesses is a must. We also hear a lot about appliances such as TVs and computers being power hogs where they draw power even when not in use. Can there be a way for manufacturers to create circuitry allowing appliances to become smarter and shut off the current draw when not in use?

The Department of Energy is improving and enforcing appliance standards to drive innovation and make appliances more energy efficient.  This is a great way to save energy – and save consumers money.

For example, in 1977, California approved landmark efficiency standards for refrigerators, air conditioners, and freezers.  The resulting improvement in the efficiency of refrigerators is responsible for energy savings today greater than all the non-hydro renewable power generation in the U.S.  Meanwhile, since the 1970s, the inflation-adjusted cost of refrigerators has dropped by about half while energy consumption was simultaneously reduced by more than 75 percent.

The efficiency standards that the Department has finalized since January 2009 are projected to save consumers between $250 billion and $300 billion over the next 20 years.  There are also easy steps we can take to save energy, like putting computers in sleep mode when you’re not using them.

In addition to appliances, there are enormous opportunities to save money by upgrading the efficiency of buildings through steps like improving insulation and installing energy efficient windows. Over the next several years, we want to help millions of American families seize the opportunity to cut their utility bills by making their homes and appliances more energy efficient while increasing comfort.

Diversify Our Sources of Electricity

We also heard from many of you about the opportunities to promote clean sources of electricity. President Obama has set an ambitious but achievable goal of doubling our generation of electricity from clean energy sources by 2035. This includes renewables like wind, solar and hydro along with clean coal, natural gas, and safe nuclear power.   We have launched groundbreaking research and development projects in areas ranging from thin film solar power to carbon capture and sequestration.

Thank you again for your comments and feedback.  By leading in clean energy, we can create millions of new jobs.  You can read about more of our plans in the Blueprint for a Secure Energy Future that President Obama recently released.  I invite you to continue the conversation with me on Facebook.com/StevenChu.