June 16, 2011 at 10:58 AM ET by Karen Mills
Twitter Facebook Email
Summary:
The US Small Business Administration holds a roundtable with manufacturers, focusing on the manufacturing workforce to encourage American exports and spur job growth.

Supporting growth and innovation in manufacturing is critical to helping America out-compete the rest of the world and create 21st-century jobs.

On Monday, I was at DuPont in North Carolina holding a roundtable with manufacturers as part of the President’s meeting with the Council on Jobs and Competitiveness. I talked to a small business that designed a safer tool for doctors to use in surgery, and they hope to start hiring and manufacturing soon.  In addition, I’ve talked to many more small manufacturers in recent weeks, from an industrial cabinet maker in El Paso to a “green” roof-shingle company in Buffalo. Their common thread is that they’re all making plans to grow and hire.

Since 2010, nearly 250,000 manufacturing jobs have been added in the U.S., helping reverse a decade-long trend when millions were lost. 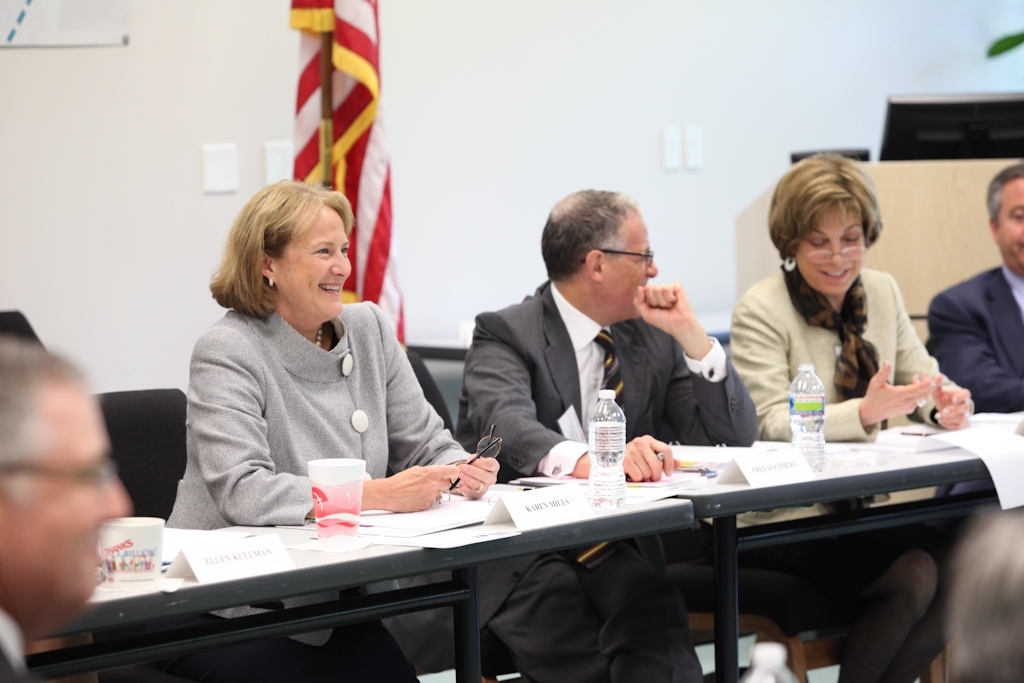 As part of the President's meeting with the Council on Jobs and Competitiveness, SBA Administrator Karen Mills (on the left) holds a roundtable discussion with manufacturers at DuPont in North Carolina. (Photo by DuPont).

At the SBA, we put important tools directly in the hands of small manufacturers, including more than $2 billion in financing to them last year alone. Through the Small Business Jobs Act, we also raised the SBA loan limit to small manufacturers to up to $5.5 million (the highest SBA loan limit ever) to help them buy a new warehouse or a big piece of equipment, and put Americans back to work.

What I’m hearing from small manufacturers is that they’re working harder than ever to develop new products and become more nimble. In fact, some are bringing business back to the U.S. that had previously been overseas.

“Made in America” is hot. New data shows that the trade deficit has shrunk as U.S. exports reached record levels of $175 billion in April. Exports now support about 25 percent of U.S. manufacturing jobs.  We need to capitalize on these positive trends by giving small manufacturers even more tools, such as our new Export Business Planner.

In addition to small exporters, we’re also focused on manufacturers that are part of supply chains.
Recently, Jeff Immelt, the CEO of General Electric, and I went to Dayton to visit the small supplier that makes labels for products like Tide. A recent study shows that when a small supplier starts working with a larger company, the small supplier is able to create about 150 percent more jobs in just a few years.  That’s data we can’t ignore, and it’s a big reason that we’re working together to develop recommendations to support these job generators.

Another area that shows great potential is strengthening the manufacturing workforce. Last week, the President announced a major new effort with Skills for America’s Future and the nonprofit arm of the National Association of Manufacturers. Right now, there are many job openings in “precision” and highly-skilled manufacturing, but too few Americans who are trained to fill those jobs. That’s why manufacturers and community colleges will be working to create a credentialing system to put 500,000 students on a clear track to a good, 21st century manufacturing job when they graduate.

Overall, U.S. manufacturers are a major reason that our country has experienced 15 straight months of private sector job creation and seven straight quarters of growth. Let’s build on the success of America’s manufacturers, and let’s continue to make sure they have the tools they need to build their businesses and create good jobs.