Today, the President traveled to Bettendorf, Iowa to tour the Alcoa Davenport Works plant and deliver remarks on the critical role the manufacturing sector plays in the American economy. The Davenport factory serves as the manufacturing hub for Alcoa's $3 billion aerospace business, producing an aluminum-lithium alloy that makes Airbus and Boeing airplanes lighter and more corrosion resistant at a lower cost.

In his remarks, the President stressed the importance of having a strong and growing manufacturing sector as part of the continuing economic recovery:

That’s why two years ago, we stood by the auto industry and kept some of our nation’s largest automakers from being sold for parts.  And today, for the first time in years, the Big Three automakers are adding jobs and turning a profit and putting steel workers to work.

That’s also why I announced last week a new partnership between our top engineering schools, our most innovative manufacturers, and the federal government to get American products from the drawing board to the factory floor to the marketplace as quickly as possible.  And today, I’m proud to announce that Alcoa is joining that partnership.  The idea is to create jobs now, and to make sure America stays on the cutting edge of manufacturing for years to come. 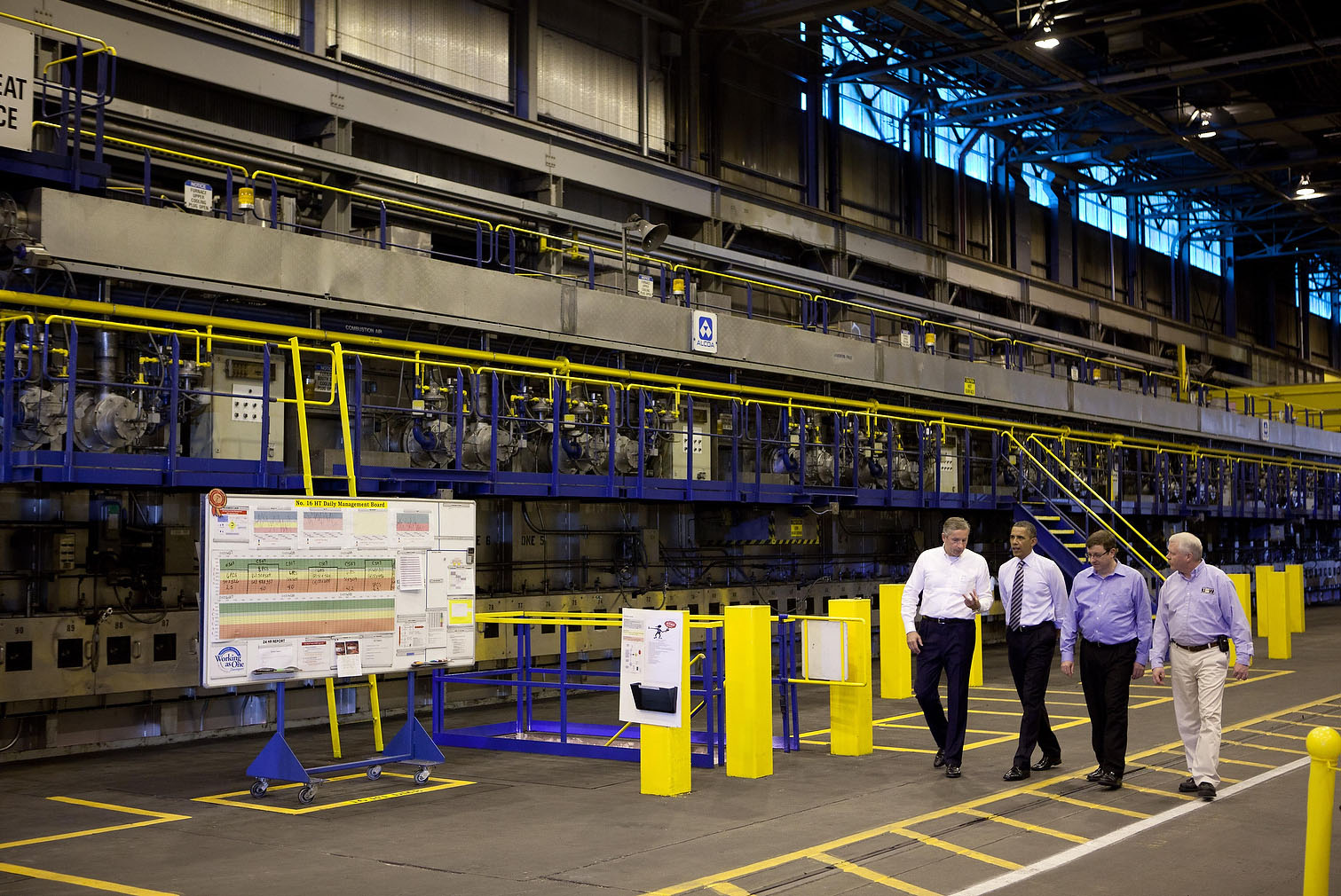 The President’s plan will build American domestic manufacturing capabilities by investing more than $500 million in critical national security industries and next-generation robotics, in order to increase energy-efficiency in the manufacturing process and develop new technologies that will dramatically reduce the time required to design, build, and test manufactured goods.

The President affirmed that by tapping into the ingenuity and creativity of the American people we will create the new products, new industries and new jobs of the future:

I see an America where people don’t give up, where people don’t quit.  I see companies like Alcoa where reinvention is a part of life.  Whatever the future may bring, I know you want to be a part of it.  And that spirit has always been at the heart of our American story.

You know, as I was walking in, your team talked about I guess a saying around Alcoa, it says, “Nobody is perfect, but a team can be perfect.”  Well, none of us individually are perfect, but as a team, America can perfect ourselves.  But we got to start working like a team.  Instead of having the kind of squabbling we see in Washington all the time, everybody has got to start thinking together the way engineers and workers and the business side of Alcoa thinks together.  What’s our market?  What’s the product we want to produce?  How can we make it better?  How can we make the plant safer?  How can we cut costs?  How can we retrain our workers?  Problem-solving all the time, that’s what’s made you successful.  That’s what will make America successful -- by adapting and innovating, but also thinking like a team, instead of turning on each other.

And I promise you, if we continue to adapt and we continue to innovate, and we work together to compete around the world, America will come back stronger than before.  We will lead the way forward.  And we will make the next century another great American century.