Today President Obama took a big step forward in his goal to strengthen the economy and strengthen the middle class with the nomination of Richard Cordray as Director of the Consumer Financial Protection Bureau.

It has been one year since President Obama passed financial reform to help tackle the problems that created the financial crisis that pulled the economy into the worst recession we've seen since the Great Depression, As the President described today, the law did three things, "First, it made taxpayer-funded bailouts illegal, so taxpayers don’t have to foot the bill if a big bank goes under. Second, it said to Wall Street firms, you can’t take the same kind of reckless risks that led to the crisis. And third, it put in place the strongest consumer protections in history."

As part of financial reform, President Obama tasked one consumer watchdog with "looking out for regular people in the financial system."  The President got the idea from Elizabeth Warren:

And that’s why I asked Elizabeth Warren to set up this new bureau.  Over the past year she has done an extraordinary job.  Already, the agency is starting to do a whole bunch of things that are going to be important for consumers -- making sure loan contracts and credit card terms are simpler and written in plain English.  Already, thanks to the leadership of the bureau, we’re seeing men and women in uniform who are getting more protections against fraud and deception when it comes to financial practices. And as part of her charge, I asked Elizabeth to find the best possible choice for director of the bureau.

Richard was one of the first people that Elizabeth recruited, and he’s helped stand up the bureau’s enforcement division over the past six months.  I should also point out that he took this job –- which meant being away from his wife and 12-year-old twins back in Ohio –- because he believed so deeply in the mission of the bureau.  Prior to this, as Ohio’s attorney general, Rich helped recover billions of dollars in things like pension funds on behalf of retirees, and stepped up the state’s efforts against unscrupulous lending practices.  He’s also served as Ohio’s treasurer and has successfully worked with people across the ideological spectrum  -– Democrats and Republicans, banks and consumer advocates.

Now, last but not least, back in the ‘80s, Richard was also a five-time Jeopardy champion -- and a semi-finalist in the Tournament of Champions.  Not too shabby.  That’s why all his confirmation -- all his answers at his confirmation hearings will be in the form of a question.  That’s a joke.  (Laughter.) 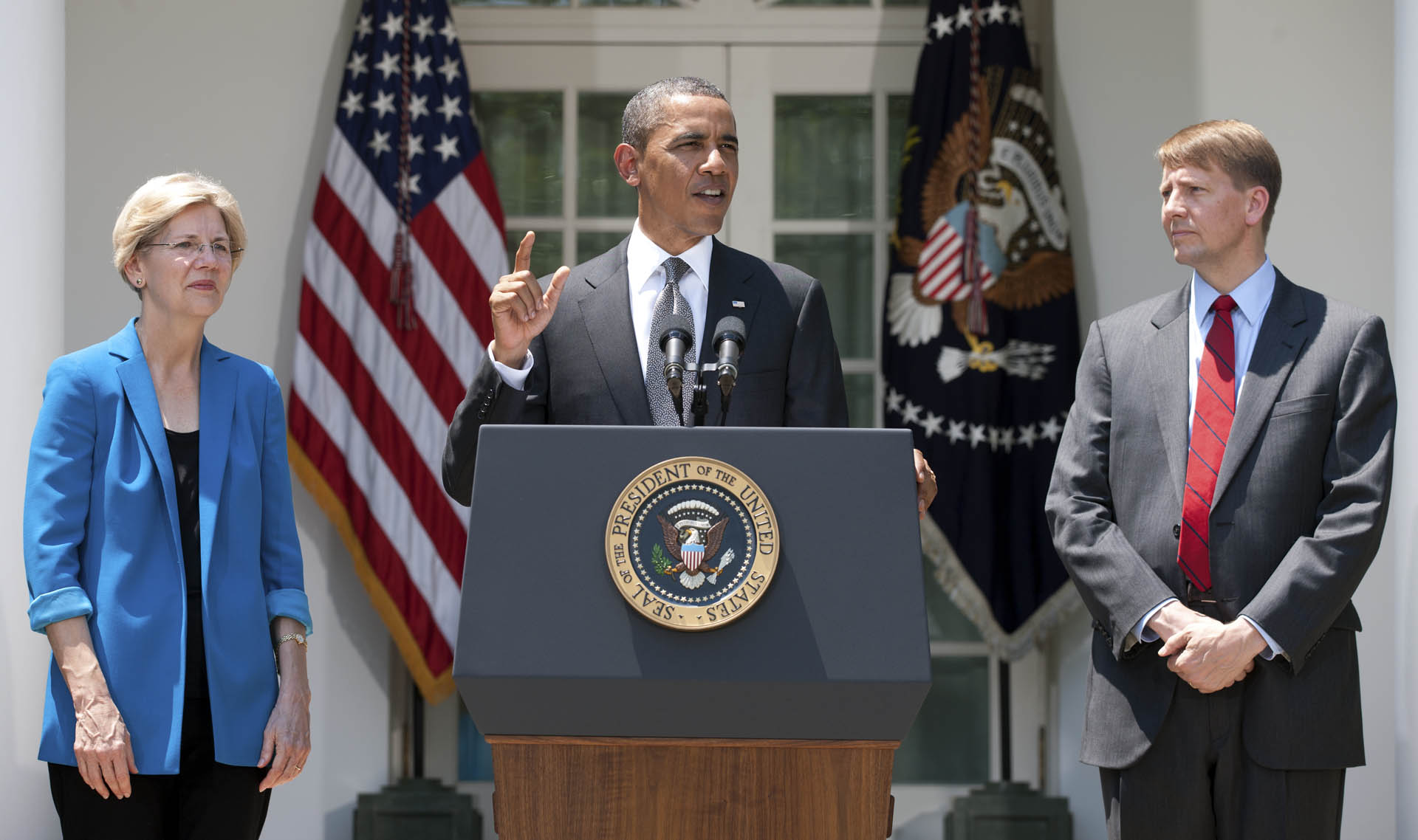 President Barack Obama announces the nomination of former Ohio Attorney General Richard Cordray, right, as the first director of the Consumer Financial Protection Bureau (CFPB) during a statement in the Rose Garden of the White House, July 18, 2011. At left is Elizabeth Warren, interim director of the CFPB. (Official White House Photo by Lawrence Jackson)

The President also spoke about the tens of millions of dollars lobbyists and lawyers have spent this year to try to weaken the laws to protect consumers and undo progress:

The fact is the financial crisis and the recession were not the result of normal economic cycles or just a run of bad luck.  They were abuses and there was a lack of smart regulations.  So we’re not just going to shrug our shoulders and hope it doesn’t happen again.  We’re not going to go back to the status quo where consumers couldn’t count on getting protections that they deserved.  We’re not going to go back to a time when our whole economy was vulnerable to a massive financial crisis.  That’s why reform matters.  That’s why this bureau matters.  I will fight any efforts to repeal or undermine the important changes that we passed.  And we are going to stand up this bureau and make sure it is doing the right thing for middle-class families all across the country.

Middle-class families and seniors don’t have teams of lawyers from blue-chip law firms.  They can’t afford to hire a lobbyist to look out for their interests.  But they deserve to be treated honestly.  They deserve a basic measure of protection against abuse.  They shouldn’t have to be a corporate lawyer in order to be able to read something they’re signing to take out a mortgage or to get a credit card.  They ought to be free to make informed decisions, to buy a home or open a credit card or take out a student loan, and they should have confidence that they’re not being swindled.  And that’s what this consumer bureau will achieve.