September 6, 2011 at 6:42 PM ET by Secretary Ray LaHood
Twitter Facebook Email
Summary:
Allowing funding for America's roads and bridges to expire would cost nearly one million construction workers their jobs over the next year. See how many jobs are at stake in your state if Congress fails to pass a clean extension of the transportation bill.

Ed. Note: Cross-posted from Fast Lane, the blog of the U.S. Secretary of Transportation.

In his weekly address on Saturday, President Obama called on Congress to do what it has done seven times over the past two years: pass a clean extension of the transportation bill.

Allowing funding for America's roads and bridges to expire would be disastrous for our nation's economy, costing nearly one million construction workers their jobs over the next year, furloughing 4,000 transportation professionals, and losing almost $1 billion in revenue after the first ten days alone.

According to a new report from the National Economic Council, a lapse in the federal program that supports road, bridge, and transit work would jeopardize more than 140,000 active projects and hundreds of thousands of jobs. As the President said, "Those are serious consequences, and the pain will be felt all across the country. In Virginia, 19,000 jobs are at risk. In Minnesota, more than 12,000. And in Florida, over 35,000 people could be out of work if Congress doesn’t act." 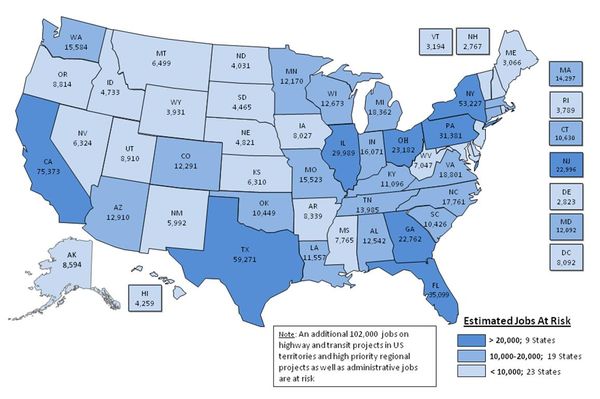 At the local level, the economic impact--in addition to the lost jobs--will be severe. Because state and local authorities expend their own resources before being reimbursed by federal surface transportation accounts, letting the law expire will subject them to significant financial exposure they will be unable to withstand.

These are outcomes we simply cannot afford. The US Chamber of Commerce knows this. The AFL-CIO knows this. And the US Conference of Mayors knows this.

Fortunately, these outcomes are completely preventable. All that's needed is for Congress to do what it has already done seven different times over the last two years--without injecting politics into the process. I've said many times before that there are no Republican roads or Democratic bridges--these projects are crucial for everyone, and they can put our friends and neighbors back to work.

"There’s no reason," the President said, "to put more jobs at risk in an industry that has been one of the hardest-hit in this recession. There’s no reason to cut off funding for transportation projects at a time when so many of our roads are congested; so many of our bridges are in need of repair; and so many businesses are feeling the cost of delays."

We need to extend our transportation program and put people to work rebuilding America. We need to put differences aside and do the right thing for our economy. The clock is ticking.

Ray LaHood is Secretary of the Department of Transportation.