October 19, 2011 at 1:12 PM ET by Nikki Sutton
Twitter Facebook Email
Summary:
The American Jobs Act will give businesses that hire veterans who have been unemployed six months or longer a tax credit up to $5,600 to encourage hiring and make it easier for America's heroes to find jobs when they return home. 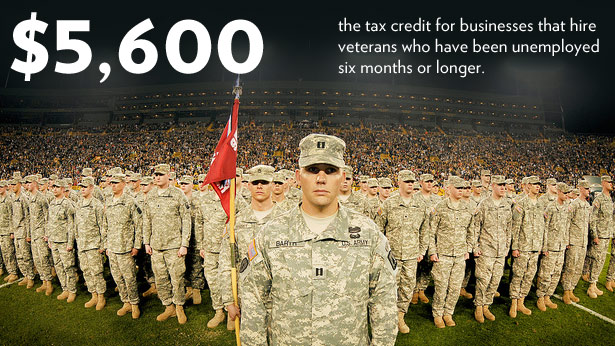 While the President is on the road, we're pulling out numbers that show how the American Jobs Act will make an immediate impact in communities across the country.  Numbers like $5,600, the tax credit for businesses that hire veterans who have been unemployed for six months or longer.

Providing a tax credit incentive for businesses to employee veterans will help encourage hiring and make it easier for America's heroes to find jobs when they return home. And the tax credit rises to $9,600 for hiring veterans who also have service-connected disabilities.

As President Obama said when he first introduced the American Jobs Act to a joint session of Congress, "We ask these men and women to leave their careers, leave their families, risk their lives to fight for our country. The last thing they should have to do is fight for a job when they come home." During the address to Congress, members on both sides of the aisle stood and applauded in support of tax credits for businesses that hire veterans. President Obama is now calling for action:

So when it comes for a vote in the Senate, I expect to get votes from both sides of the aisle.  Don’t just applaud about it, vote for it.  Vote for it.

This generation of veterans has learned that the challenges don’t end in Kandahar or Baghdad -- they continue right here at home.  And today, we’re saying to those veterans who fought for us, now we are fighting for you -- for more jobs, for more security, for the opportunity to keep your families strong, the chance to keep America competitive economically in the 21st century.

Providing businesses that hire unemployed veterans a $5,600 tax credit is the right thing to do and is just one more common sense solution in the American Jobs Act to get the economy growing faster.