The American Jobs Act by the Numbers: 40 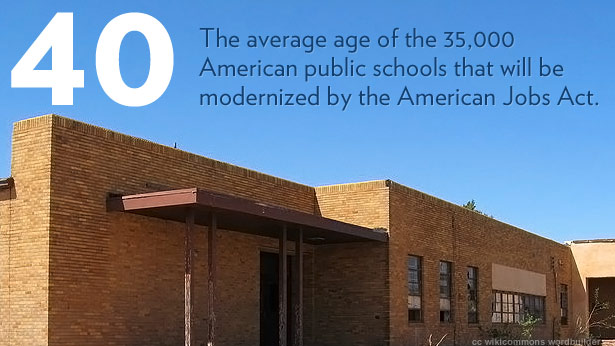 Today, President Obama continues his American Jobs Act Bus Tour to highlight the many aspects of the American Jobs Act that will build an economy that lasts. Investments like preventing up to 280,000 teacher layoffs and putting construction workers back on the job rebuilding America's schools to provide all of our students with a world class education.

This week, we're bringing you numbers from the bus tour that demonstrate how the jobs bill will impact your community; numbers like 40, which is the average age of the American public schools that will be modernized with the American Jobs Act.

The American Jobs Act will invest in retrofitting at least 35,000 public schools across the country, supporting new science labs, Internet-ready classrooms and school renovations in both rural and urban communities. These investments will help give American students the edge they need to prepare for the 21st century economy and compete with students from around the world.

Education Secretary Arne Duncan explained the challenge we're up against:

[Imagine] trying to design the next generation of tablet computers using mainframe hardware from the Eisenhower administration. Or American automakers trying to out-engineer foreign competitors on an assembly line with equipment from the 1960s.

Unfortunately, just such antiquated facilities and barriers to innovation exist today in precisely the institutions that can least afford it: our nation’s public schools. The digital age has now penetrated virtually every nook of American life, with the exception of many public schools.

And as President Obama has said, when school buildings get too old without repairs they begin to crumble:

They start leaking, and ceiling tiles start to cave in, and there’s no heat in the winter or air-conditioning in the summer.  Some of the schools the ventilation is so poor it can make students sick.

How do we expect our kids to do their very best in a situation like that?  The answer is we can’t.  Every child deserves a great school, and we can give it to them, but we got to pass this bill.

Updating science labs and connecting classrooms to the Internet are investments that need to be made. And getting electricians, engineers and carpenters back on the job making those investments in the education of our students is just one of the common sense solutions in the American Jobs Act to give the economy the jolt it needs.