American Jobs Act by the Numbers: 150 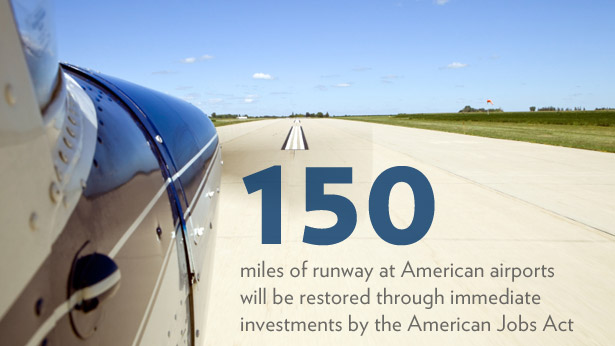 Throughout the week, we'll bring you numbers from the road to highlight aspects of the jobs bill, numbers like 150 miles. The American Jobs Act includes an immediate investment in employing construction workers to restore 150 miles of runway at American airports and put in place a next-generation air-traffic control system to reduce travel time and delays.

President Obama has made it clear that investing in infrastructure is not a partisan issue and it's time to put those in industries hit hardest by the recession back to work rebuilding America. As the President said, "now people go to Beijing Airport and they say, I wish we had an airport like that. We can't compete that way, playing for 2nd or 3rd or 4th or 8th or 15th place."

There is no reason the world’s newest airports can’t be built in the United States by American workers and the American Jobs Act will help make that possible.

Creating jobs by rebuilding America's runways, railways and roads makes sense to groups like the American Public Transportation Association (APTA). In APTA President William Millar's own words, "The $50 billion in direct funding proposed in the American Jobs Act will go a long way to jump start needed transportation investments...for every $1 invested in public transportation, $4 is generated in economic returns."

Improving airports by restoring 150 miles of runways and investing in transportation infrastructure to keep America competitive in the 21st century is just one of the reasons why President Obama is calling on Congress to pass pieces of the American Jobs Act right away. Learn more at WhiteHouse.gov/JobsAct.