We the People Takes the Next Step: Responding to Your Petitions

October 26, 2011 at 2:21 PM ET by Macon Phillips
Twitter Facebook Email
Summary:
Today, one of President Obama's top education advisors, Roberto Rodriguez, issued the first response to a petition created through We the People

Update: The signatures threshold for petitions on the We the People platform to receive an official response from the White House has changed since this blog post was published. See the latest signature thresholds.

Today, one of President Obama's top education advisors, Roberto Rodriguez, issued the first response to a petition created through We the People. Here are the first few lines:

Thank you for taking the time to participate in the "We the People" petition process. We launched this online tool as a way of hearing directly from you, and are pleased that you have responded by presenting this idea.

We agree that reducing the burden of student loans is an effective way to stimulate the economy and save taxpayer dollars. That's why we're excited to announce a new policy that speaks to the concerns expressed in this petition.

In the little more than a month since the White House launched We the People, 755,000 people used the platform to create or sign more than 12,400 petitions that have gathered over 1.2 million total signatures (some people sign multiple petitions). Here are the numbers in more detail: 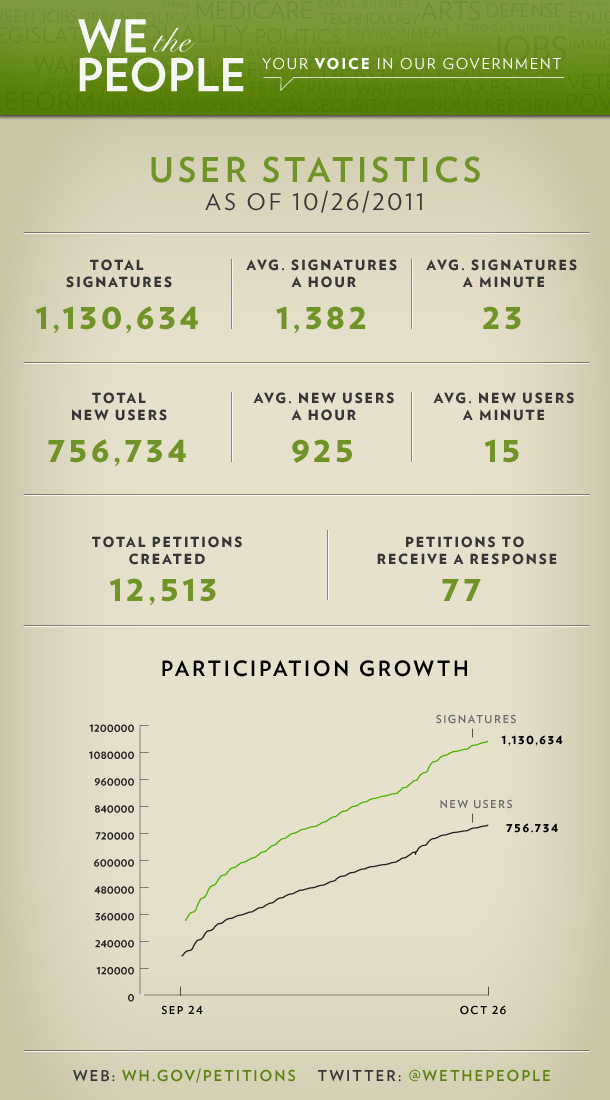 From the beginning, we’ve said that if a petition gathers enough online signatures it will be reviewed by policy experts at the White House who will issue an official response, and 77 petitions have reached that mark so far. We’ve had such a strong response to We the People that earlier this month the signatures threshold was raised from 5,000 to 25,000 signatures to ensure that we’re able to offer timely and meaningful response to petitions in the long term.

Each week, we’ve been meeting with policy officials here at the White House to review all the petitions that have crossed this threshold and ensure that your petitions are getting in front of the right policy experts throughout the Administration. Over the next few days, we’ll be posting even more responses. So be sure to visit the response section of We the People for the latest.

One of the President's Senior Advisers, David Plouffe, sent an email (join the White House email list here) about policies, including these student loan measures, being taken to create jobs and grow the economy because we can't wait for Congress to act. In the message he said:

These policies aren't a substitute for the American Jobs Act, but they will make a difference. And we don't intend to stop there.

The best ideas for growing this economy won't come from Washington – they'll come from Americans like you.

That's why We the People was launched in the first place: to bring the voices of Americans around the country into our government. We're thrilled to see so many Americans already using We the People to engage members of the Obama Administration in a constructive dialogue on an enormous scale.  With every new response we post, our hope is that We the People will continue to gain steam, not for the sizzle of being a "web tool" but for the meaningfulness of the engagement and substance of the responses.

And if you're just hearing about We The People for the first time, here's an overview video we created before it launched:

One last update: In addition to the petitions coming through We the People, the tech team has also benefited from feedback about the system itself. Over the past few weeks we’ve used this input to improve We the People's user experience – particularly when it comes to creating an account and verifying your email address for the first time. If you have more feedback, about We the People or anything related to our online program, let us know using the feedback links on every WhiteHouse.gov page or via Twitter using the hashtag #WHWeb.

To stay updated on the latest petition responses and other news about We the People we've launched @WeThePeople. We will also regularly feature responses in the White House's Daily Snapshot.