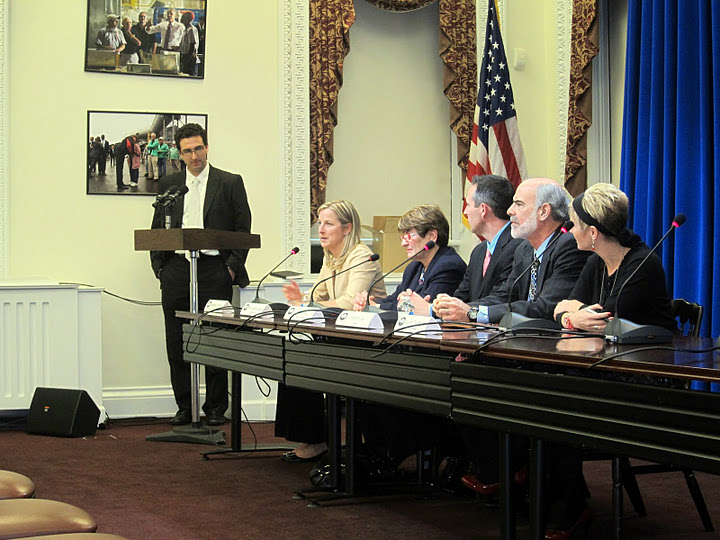 Kathleen Strottman, Executive Director of the Congressional Coalition on Adoption Institute, presents on international adoption issues alongside other panelists at a White House event to commemorate National Adoption Month. November 28, 2011.

Yesterday, The White House Office of Faith-based and Neighborhood Partnerships hosted an event to observe and celebrate National Adoption Month. We’ve had a lot to celebrate since National Adoption Month last year regarding adoption and child welfare. For the second time in this Administration, the President signed into law another extension of the Adoption Tax Credit. The President also signed into law legislation passed by Congress to improve and innovate foster care and child welfare services, as well as legislation to improve international adoption. The event featured senior Administration officials and congressional leaders, including: Secretary Kathleen Sebelius, Administrator Lisa Jackson, Senator Amy Klobuchar, Rep. Karen Bass, Commissioner Bryan Samuels, Amb. Susan Jacobs, and USAID Deputy Administrator Robert Clay. In attendance were adoption and child welfare experts and advocates, service providers and faith leaders. This event was an important continuation of the President’s leadership on the issues of adoption and child welfare.

Joshua DuBois, Executive Director of the White House Office of Faith-based and Neighborhood Partnerships, welcomed participants with the President’s ongoing support of adoption and the notion that every child deserves a family. As this event was first and foremost about celebrating the positive impact adoption has had for so many Americans, it was appropriate to begin with EPA Administrator Lisa Jackson as our opening speaker. An adoptee herself, Administrator Jackson is now making a positive and powerful difference in the lives of children and families as the senior Administration official working on environmental issues.

We were also proud that Secretary Kathleen Sebelius could join us, continuing her annual tradition of partnering with our office during National Adoption Month.  Secretary Sebelius discussed the Administration’s initiatives to promote adoption by extending, increasing, and making refundable the Adoption Tax Credit and by supporting the Child and Family Services Improvement and Innovation Act, which the President signed this fall.  Commissioner Bryan Samuels, who assists Secretary Sebelius as head of the Administration on Children, Youth and Families, spoke about his office’s efforts to reduce long-term foster care in favor of permanent families for children.

Among our partners on the Hill, Senator Amy Klobuchar discussed her sponsorship of the International Adoption Simplification Act. There are families that were formed, siblings that were able to stay together, because of this legislation that President Obama was proud to sign into law in November 2010.  Representative Karen Bass also delivered remarks describing her legislative leadership on adoption and foster care issues, which includes her key involvement in the Child and Family Services Improvement and Innovation Act and her role as co-chair of the Congressional Caucus on Adoption and Congressional Caucus on Foster Care.

Our discussion throughout the afternoon centered on three issue areas: international adoption, infant adoption, and foster care adoption.  Ambassador Susan Jacobs, Special Advisor for Children’s Issues at the State Department, and USAID Deputy Administrator Robert Clay joined other international adoption panelists focusing on public and private efforts to facilitate intercountry adoptions.  Infant adoption experts then discussed their efforts to destigmatize adoption, and ensure it is a viable option for pregnant women.  To close our afternoon, foster care panelists dispelled the myth of ‘unadoptable’ children and described initiatives to find families for teenagers and for youth with special needs.

We thank all involved in the discussion on Monday for their work on this important issue, and we will delve into the information shared at the event in a series of blogs posts throughout the week.

Michael Wear serves as Executive Assistant to the Executive Director of The White House Office of Faith-based and Neighborhood Partnerships.