By the Numbers: 50 Percent

December 6, 2011 at 3:36 PM ET by Megan Slack
Twitter Facebook Email
Summary:
The default rate on subprime mortgages made in 2006, the height of the housing bubble, now exceeds 50 percent. 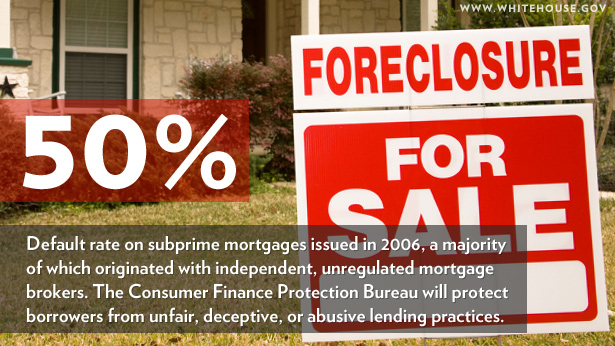 In the run-up to the financial crisis, independent, unregulated mortgage lenders were among the largest originators of subprime mortgages. The default rate on subprime mortgages made in 2006, the height of the housing bubble, now exceeds 50 percent.

In part to prevent future homeowners from being saddled with mortgages they can't pay, as well as regulate practices that led to the housing market crash in the first place, President Obama created the Consumer Financial Protection Bureau as part of the Dodd-Frank Wall Street Reform Act.

The Bureau consolidates consumer protection authorities that previously existed in seven different agencies under one roof. Prior to the passage of the Wall Street Reform Act, no single agency had effective tools to set the rules for and oversee the whole market, and consumer financial protection was not anyone’s top priority. The result was a system where no one was sufficiently accountable for getting the job done.

In addition to being tasked with the authority to supervise financial institutions like banks and credit unions under laws that already existed, CFPB will also be able to supervise financial institutions like independent mortgage lenders payday lenders, private student loan companies, credit bureaus, and debt collectors. The Bureau will be able to make and enforce rules that protect people who rely on these types of services from abusive practices, and ensure consumers have the information they need to make good financial decisions.

In fact, CFPB is already working to make mortgage disclosure forms more clear and easier to understand by redesigning the two key federal disclosure forms that people recieve when taking out a loan to purchase a home or refinance their mortgage. To find out more about Know Before You Owe, head on over to CFPB's web site.

To exercise its full authority to protect consumers, however, CFPB needs a director. President Obama has nominated Richard Cordray, Chief of Enforcement at the Consumer Financial Protection Bureau and former Attorney General of Ohio, to lead the Bureau. The Senate will vote on his confirmation this week, but as a new report makes clear, while Congress, the President, and the American public have made historic progress in establishing a single agency dedicated to protecting consumers, every day that CFPB goes without a Director is another day that American families remain at risk.