By the Numbers: 782 Percent

December 8, 2011 at 4:40 PM ET by Megan Slack
Twitter Facebook Email
Summary:
The Department of Defense found that the APR on installment loans marketed exclusively to the military was often as high as 782 percent for a two-week installment loan. 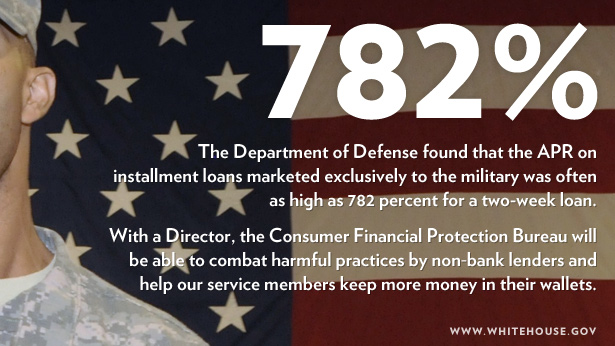 Enlisted service members are often lured into easy credit offers. Installment loan companies often have offices near military bases and market their loans online exclusively to the military. The Department of Defense found that many of these installment lenders don't disclose the cost of the loans they offer and service members sometimes pay annual rates as high as 782 percent for two-week installment loans.

According to the Department of Defense, nearly 50 percent of enlisted service members are under the age of 25. They often lack experience in managing finances and a cushion of savings to help them through emergencies, making it more likely they might turn to a high-interest loan.  Even older military members often move to new locations where they may be unfamiliar with local financial institutions and susceptible to deceptive marketing practices.

To protect all consumers, including service members, from these types of unscrupulous financial practices, the Consumer Financial Protection Bureau was established as part of the Wall Street Reform and Consumer Protection Act that President Obama signed into law last June. President Obama has nominated Richard Cordray as Director of the Bureau, and Cordray’s confirmation by the Senate will allow CFPB to establish robust federal supervision over financial service providers such as high cost lenders and debt collectors that have never been regulated before, as well as banks and credit unions. CFPB will be able to combat practices by these financial institutions and others that harm consumers, helping our service members to avoid hidden fees and keep more money in their wallets.

Although the Senate blocked an attempt to vote on Cordray’s nomination today, President Obama vowed not to back down from ensuring consumers--and particularly our service members--are fully protected from unfair, abusive, or deceptive practices by financial services providers.