By the Numbers: 400 Percent

January 5, 2012 at 1:03 PM ET by Megan Slack
Twitter Facebook Email
Summary:
Studies have found that the average interest charged on a two-week, $100 payday loan is about $16—a 400 percent interest rate. 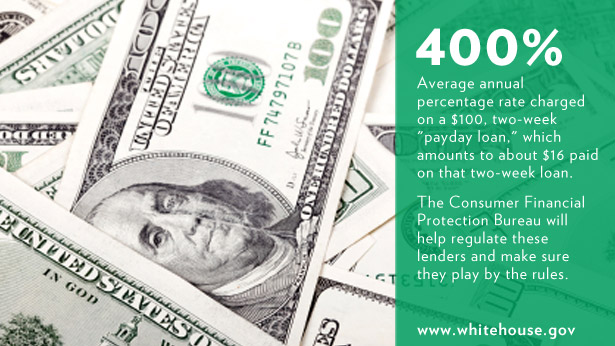 Nearly 20 million Americans use payday loans, which offer short-term funds at very high interest rates. Studies have found that the average interest charged on a two-week, $100 loan is about $16—a 400 percent interest rate.

Many people who rely on payday loans are often in desperate need of cash, making them more likely to agree to astronomical interest rates and hefty fees for late payments. But, more often than not, payday loan terms are not clearly explained upfront, if at all. Payday loans end up putting more strain on those who are already struggling financially, including people who have already depleted their resources due to extended unemployment, illness, or emergency, as well as members of the military and their families, who are often targeted by short-term lenders.

Today, the Consumer Financial Protection Bureau, or CFPB, launched the nation’s first program for supervising “non-bank” financial services, an extension of their bank supervision program that began last July. (A non-bank is a company that provides consumer financial services, but doesn’t take deposits or have a bank, thrift, or credit union charter.)

Under this new program, non-banks like payday lenders, as well as private mortgage companies and private education lenders, will be regulated and subject to federal oversight to ensure they play by the rules and don’t take advantage of consumers. CFPB will be able to establish regulations that require payday lenders to disclose borrowers’ obligations and responsibilities in clear, easy to understand terms, so that people know what they are agreeing to when taking out a payday loan.

“This is an important step forward for protecting consumers,” said Richard Cordray, Director of the CFPB. “Holding both banks and nonbanks accountable to consumer financial laws will help create a fairer, more transparent market for consumers. It will create a better environment for the honest businesses that serve them. And it will help the overall economic stability of our country.”