Celebrating the Two Year Anniversary of Let’s Move! and work in Indian Country

February 9, 2012 at 11:15 AM ET by Kimberly Teehee
Twitter Facebook Email
Summary:
Let’s Move! in Indian Country brings together federal agencies, local communities, nonprofits, corporate partners, and tribes to end the epidemic of childhood obesity in Indian Country within a generation by creating a healthy start on life for children; ensuring families access to healthy, affordable, traditional foods; and increasing opportunities for physical activity. 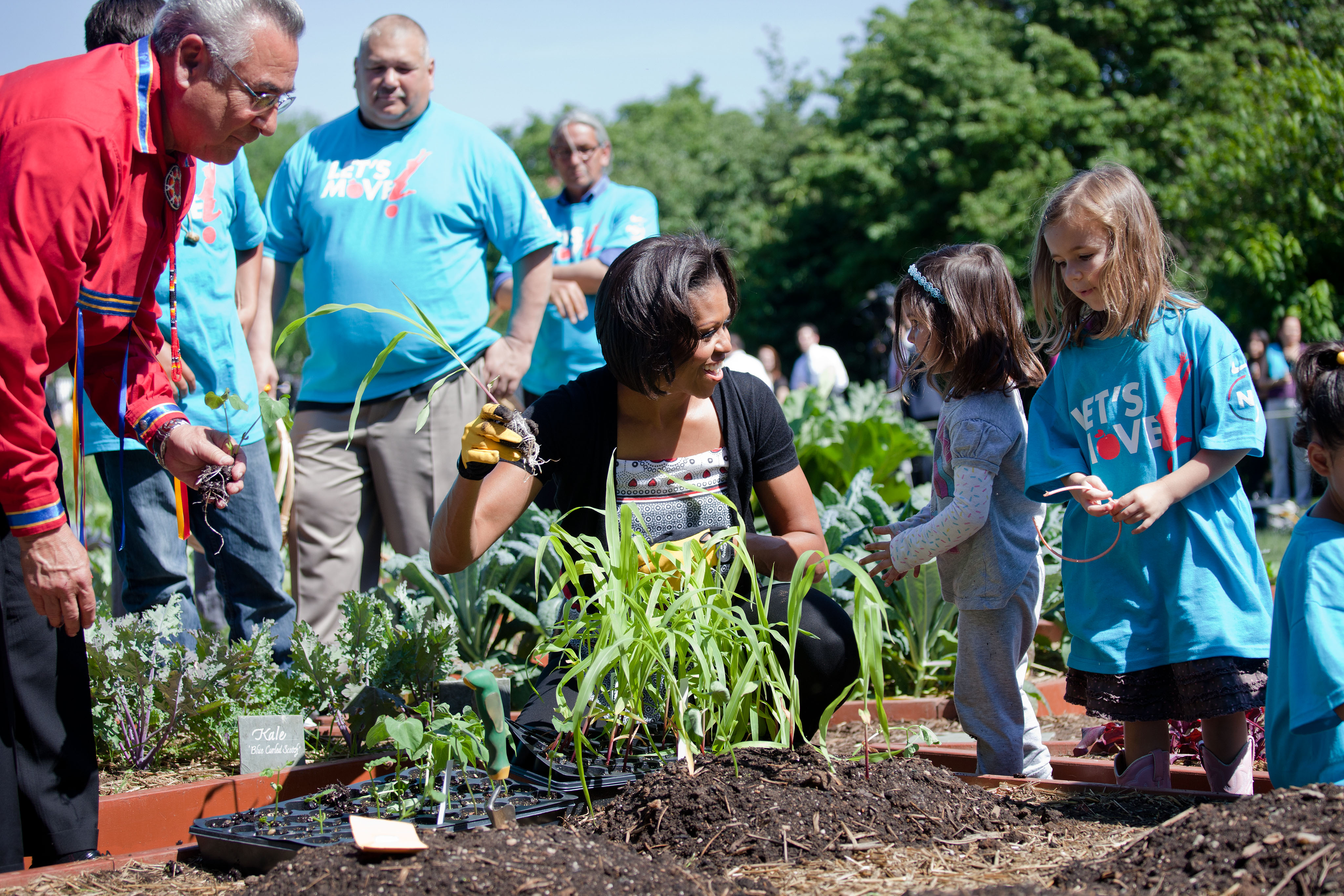 First Lady Michelle Obama participates in a Garden Harvest Event with children and members of the American Indian community, in the White House Kitchen Garden on the South Lawn of the White House, June 3, 2011. (Official White House Photo by Samantha Appleton)

Today, First Lady Michelle Obama is hitting the road to kick off a three day, nation-wide tour celebrating the second anniversary of Let’s Move!.  Since launching Let’s Move! on February 9, 2010, significant progress has been made to solve the problem of childhood obesity.

Over the past three decades, rates of childhood obesity in this country have tripled.  Today, nearly one in every three children in the U.S. are overweight or obese.  An integral part of the Let’s Move! initiative includes addressing the needs of populations where childhood obesity rates are particularly high, including American Indian and Alaska Native communities, who experience obesity and other related diseases atdisproportionately high rates and are twice as likely as the general population to be overweight.  In May 2011, First Lady Michelle Obama launched Let’s Move! in Indian Country (LMIC), bringing together federal agencies, local communities, nonprofits, corporate partners, and tribes to end the epidemic of childhood obesity in Indian Country within a generation by creating a healthy start on life for children; ensuring families access to healthy, affordable, traditional foods; and increasing opportunities for physical activity.

The First Lady’s Let’s Move! tour will highlight examples of people making changes across the country.  In Indian Country, parents, businesses, educators, elected officials, members of the military, chefs, physicians, athletes, childcare providers, schools, community and faith leaders and youth themselves have made substantial commitments to improve the health of our nation’s children.  For example, Dallas Duplessis is a youth advocate for healthier eating and started a gardening club on her reservation in Tulalip, Washington.  After witnessing the effects of unhealthy eating habits, Dallas and her family got involved with the Hilbulb Cultural Center program “Growing Together as Families,” which teaches families healthy eating habits.  Dallas then started the Tulalip Youth Gardeners Club to inspire other kids to garden together with their families.  President Obama recognized Dallas’ leadership as a White House Champion of Change in his remarks at the White House Tribal Nations Conference in December, noting that the First Lady would appreciate the goal of the club, which, in Dallas’ words, is “not to be couch potatoes, but to grow some potatoes.”

Dallas is just one of the many “champions” of the Let’s Move! initiative in Indian Country.

LMIC has worked with many stakeholders in Indian Country to create a comprehensive toolkit to connect communities, schools and tribal leaders to resources, funding, trainings and programs that will help improve the health of the next generation.  The LMIC interagency partners have also worked towards four specific goals, informed by the work of the Childhood Obesity Task Force and the feedback received through meetings with tribal leaders and organizations.  These goals include:

Since the launch of LMIC, the White House has hosted several events focused on American Indian and Alaska Native health.  In May 2011, St. Louis Rams Quarterback and Heisman Trophy Winner Sam Bradford joined local American Indian and Alaska Native youth on the national mall to film a PSA about the LMIC initiative.  And in June 2011, the First Lady joined American Indian children for an afternoon in the White House Kitchen Garden planting the “three sisters” crops (Cherokee White Eagle corn, Rattlesnake pole beans, and Seminole squash).  In July 2011, as part of the Summer South Lawn Series, the White House hosted its first-ever lacrosse clinic on the South Lawn, bringing players from the Iroquois Nationals Team to introduce local and Native American youth to the sport and its cultural traditions.  Also in July 2011, the Department of Justice, working with federal agency partners, hosted a week-long National Intertribal Youth Summit in Santa Fe, NM to provide an opportunity for Administration officials to hear directly from youth in Indian Country on critical issues facing their communities. As part of the LMIC effort, the summit featured daily exercise clinics and a special field trip featuring golf, soccer and nutrition education clinics.

Only through continued support and leadership with tribes and tribal communities can LMIC succeed in building a healthy future for the youth of Indian Country.  The Administration is committed to building on current progress and looks forward to expanding partnerships with tribes and other groups to end the epidemic of childhood obesity in Indian Country within a generation.  For more information on these efforts please visit Let's Move!.