An America Built to Last: Strengthening Economic Security in Retirement

February 15, 2012 at 5:42 PM ET by Alan Krueger, Gene Sperling
Twitter Facebook Email
Summary:
The Departments of Treasury and Labor are taking steps to strengthen economic security for our nation’s seniors by giving Americans greater investment information and access to more choices to plan for a secure retirement

In his State of the Union message last week, President Obama laid out a blueprint for an America that’s built to last—where hard work pays off and responsibility is rewarded. Today, the Departments of Treasury and Labor are taking steps to strengthen economic security for our nation’s seniors by giving Americans greater investment information and access to more choices to plan for a secure retirement. These steps will be of particular importance to women, who tend to live longer and have fewer retirement assets and lower retirement income than men.

The Department of Labor is taking action to require 401(k) plan providers to better disclose the cost and nature of the services they provide, while Treasury and the IRS are announcing steps that will ease regulatory barriers in the market for annuities and other forms of lifetime income. The Council of Economic Advisers (CEA) has prepared a detailed report describing the significance of today’s actions, which can be accessed here.

Today’s announcements complement previous Administration initiatives to make retirement more secure for American families. In September 2009, President Obama announced expanded opportunities for automatic enrollment in retirement savings plans. The President has also championed an automatic IRA legislative proposal through which tens of millions of workers without access to a workplace retirement plan would be automatically enrolled in IRAs through payroll deposit contributions, while remaining free to opt out. And the Administration has proposed easing requirements on the timing and amount of distributions from retirement accounts for many retirees, reducing the compliance burden and providing elderly Americans with greater control over their retirement assets.

Women are especially exposed to this risk. Even though women’s participation rate in retirement plans is equal to that of men, women tend to have significantly lower overall retirement income and retirement assets than men, due in part to lower wages and lower rates of full-time employment among women during their working lives. If anything, these statistics understate the need for improved retirement security among elderly women due to their greater life expectancy. For example, in 2007, the average American woman turning age 65 could expect to live 19.9 additional years—2.7 more years than the average American man. And elderly women are more likely to live in poverty than elderly men. In 2008, 17 percent of unmarried women age 60 and over were poor, and an additional 20 percent were nearly poor, with incomes between 100 and 150 percent of the official poverty level. The disparity for women becomes particularly pronounced at older ages: at age 75 and above, 12 percent of women (married and unmarried) lived below the poverty level in 2010, compared with only seven percent of men.

Traditionally, a guaranteed and predictable stream of lifetime income, such as a defined benefit pension, has helped to attenuate this risk, for both men and women. Lifetime income could also be provided by an annuity purchased through a 401(k) or IRA. Yet in recent years the use of lifetime income in retirement plans has diminished substantially.

This dynamic has underscored the bedrock importance of Social Security—with benefits that are guaranteed for life, adjusted for inflation, and not subject to financial market fluctuations. It has also underscored the need to expand the availability of lifetime income options in retirement plans.

Currently, a number of regulatory barriers reduce the availability and take-up of lifetime income options. Today’s proposed actions would facilitate the creation of new lifetime income choices to help retirees manage their savings by:

Improving Disclosure of Investment and Recordkeeping

Americans can also increase their savings by reducing the fees they pay as their savings accumulate in a retirement plan. Currently, sponsors of retirement plans too often are not provided with information on the investment and recordkeeping fees charged to their plans. This makes it difficult to compare the after-fee cost of administering a plan and may obscure the compensation incentives of plan servicers, potentially biasing the advice provided to plan sponsors.

Improved fee disclosure may lead to lower overall fees if plan sponsors can better assess the value and worth of the services provided. In addition, to the extent that compensation arrangements may disproportionately reward plan servicers for providing particular products, improved disclosure may lead to better portfolio allocations and higher returns. Both of these factors could lead to higher accumulated capital at retirement, as small differences in annual rates of return can lead to large gains in cumulative returns over time. For example, a 0.25 percent higher return after fees could increase the cumulative savings of a 25 year-old worker by about 10 percent by retirement (see figure below). 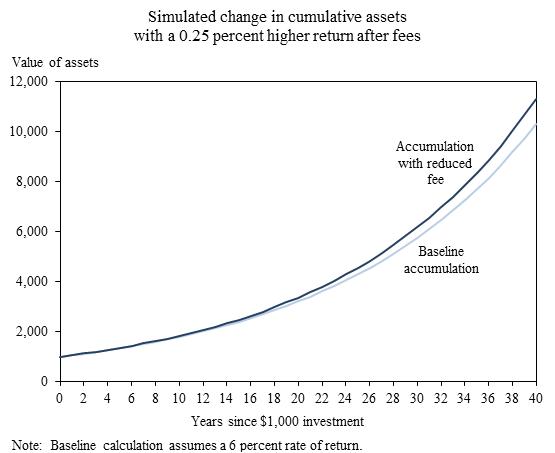