The Blueprint for an America Built to Last

January 24, 2012 at 11:19 PM ET by Matt Compton
Twitter Facebook Email
Summary:
The ideas from the 2012 State of the Union represent a blueprint for building an America that lasts. 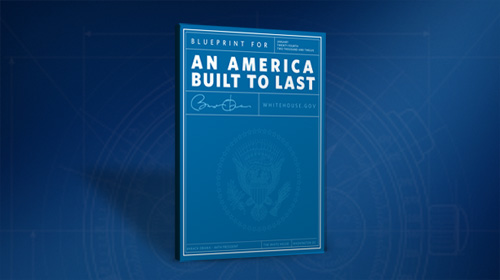 Tonight, the President outlined a series of ideas to build an economy that works for everyone, one that will bring about a new era of American manufacturing, and promote homegrown and alternative energy sources.

Taken together, those ideas represent a blueprint for the future.

For decades, economic security for the middle class has been unraveling. Jobs that were once the source of stable livelihoods were shipped overseas. Those at the very top watched their incomes skyrocket, while the majority of Americans were stuck with stagnant salaries and rising costs. And all of this was happening before the worst economic crisis in generations.

What's it going to take to address this crisis?

We need to promote new skills and better education so that all Americans are prepared to compete in a global economy. That's why, tonight, the President said every state should require all students to stay in high school until they earn a diploma or turn 18. That's why the President called for a new partnership between community colleges and businesses to help train and place 2 million skilled workers.

We need to put a new emphasis on American manufacturing. That means refocusing our corporate tax structure to reward businesses who work to keep jobs in the United States, and end tax incentives for corporations that outsource. That means getting tough on trade enforcement and rebuilding American infrastructure.

We need to promote homegrown, American energy. That's why President Obama supports finding ways to develop the extensive natural gas reserves we have in the United States, and is calling for new ways to create clean energy jobs.

And above all, we have to restore a basic sense of fairness to our economic system. We need to revamp our tax system -- ending subsidies for millionaires and billionaires and protecting working families from a tax hike. We need to give every responsible homeowner the opportunity to refinance their mortgage at the current historically low interest rates. We need to make sure that Wall Street plays by the same rules as the rest of us.

Today, the economy is growing again. Over the past 22 months, businesses have created 3.2 million jobs. But it's going to take more to keep moving forward, and that's the goal of President Obama's blueprint.

Learn more about the policies behind President Obama's Blueprint

Learn more about the 2012 State of the Union Address