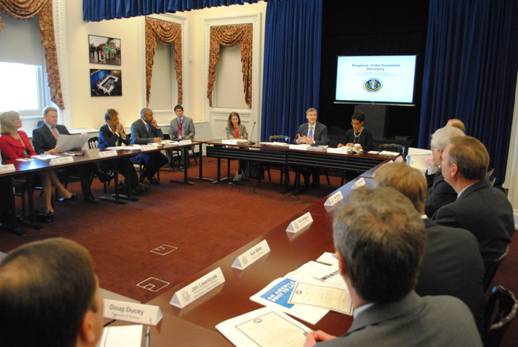 Chairman of the Council of Economic Advisers, Alan Krueger, leads a discussion about the progress of the economic recovery with state treasurers, March 19, 2012. (Photo by White House Office of Intergovernmental Affairs)

Last week, state treasurers from across the nation gathered at the White House for a discussion with Administration officials on the economic recovery.

Alan Krueger, Chairman of the Council of Economic Advisers, began the meeting by providing an overview of the economy.  Krueger pointed to positive signs of economic growth in many areas.  He highlighted that the private sector has added 3.9 million jobs over the past 24 months and that consumer confidence continues to rise.

Following Krueger’s presentation, Treasurer Kate Marshall of Nevada moderated a discussion on the financial and economic issues that many of her colleagues continue to face.  Participating in the discussion were Mary Miller, Assistant Secretary for Financial Markets at the Department of Treasury; Brian Deese, Deputy Director of the National Economic Council; and Michael Strautmanis, Deputy Counselor for Strategic Engagement.

The treasurers then participated in a discussion about the President’s budget.  Heather Higginbottom, Deputy Director of the Office of Management and Budget, provided careful analysis and highlighted how the Administration invested in education and innovation, even in a tight budget, because the President believes doing so is essential to help create an economy built to last.

David Agnew, Director of Intergovernmental Affairs, concluded by reaffirming the Administration’s commitment to working with state treasurers and recognizing the importance of coordination between Federal and state governments as the economic recovery continues.