May 8, 2012 at 10:15 AM ET by Colleen Curtis
Twitter Facebook Email
Summary:
Today President Obama will call on Congress to take action to create jobs and ensure middle class security.

President Obama has put together a "to do" list for Congress that, if acted upon quickly, will create jobs and help restore middle class security. These initiatives all have bipartisan support, and the President believes that they will help create an economy built to last that supports secure American jobs and makes things the rest of the world buys - not one built on outsourcing, loopholes, or risky financial deals. 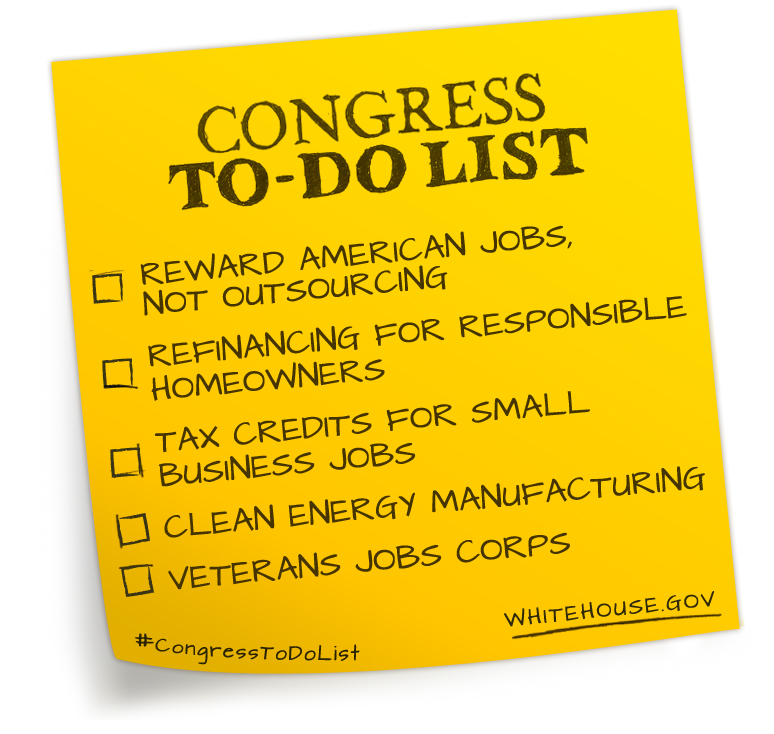 1. Reward American Jobs, Eliminate Tax Incentives To Ship Jobs Overseas: Attract and keep good jobs in the United State sby passing legislation that gives companies a new 20 percent tax credit for the cost of moving their operations back to the U.S. Congress should pay for this credit by eliminating tax incentives that allow companies to deduct the costs of moving their business abroad.

2. Cut Red Tape So Responsible Homeowners Can Refinance:  Pass legislation to cut red tape in the mortgage market so that responsible families who have been paying their mortgages on time can feel secure in their home by refinancing at today’s lower rates.

3. Invest in a New Hire Tax Credit for Small Businesses:  Invest in small businesses and jumpstart new hiring by passing legislation that gives a 10 percent income tax credit for firms that create new jobs or increase wages in 2012 and that extends 100 percent expensing in 2012 for all businesses.

5. Put Returning Veterans to Work Using Skills Developed in the Military:  Honor our commitment to returning veterans by creating a Veterans Job Corps to help Afghanistan and Iraq veterans get jobs as cops, firefighters, and serving their communities.