May 14, 2012 at 10:32 AM ET by Matt Compton
Twitter Facebook Email
Summary:
In Nevada, refinancing applications are up 237% since last November. 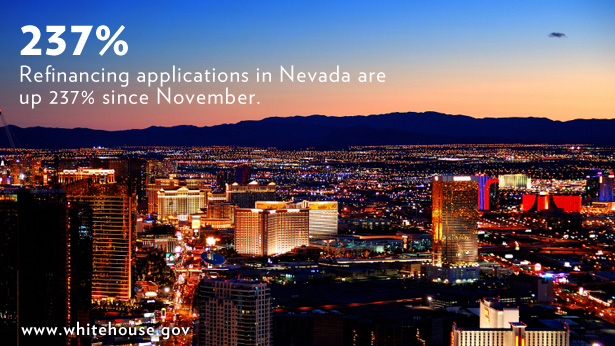 President Obama has been focused on making refinancing simpler for responsible homeowners since he took office, and in Nevada, where the President visted Friday, refinancing applications are up 237% since last November.

It began in 2009 when the administration launched the Home Affordable Refinance Program (HARP), which helped nearly 1 million homeowners save thousands of dollars. But despite that success, the benefits from HARP have been limited because of eligibility requirements and costs associated with the program.

So last October, the President announced that Fannie Mae, Freddie Mac, and the Federal Finance Housing Agency would work with lenders to make it easier for even more mortgage holders to refinance.

And it's having an impact: Refinancing applications have increased by 50 percent since the fall.

But the reason that President Obama is in Nevada, calling on Congress to act, is because we've reached the upward limit for what the Obama administration can do alone. As part of his To-Do List, he's calling on lawmakers to cut the red tape so that responsible homeowners across the country who have been paying their mortgage on time can feel secure in their home and refinance at today’s lower rates.