By the Numbers: 1 Billion 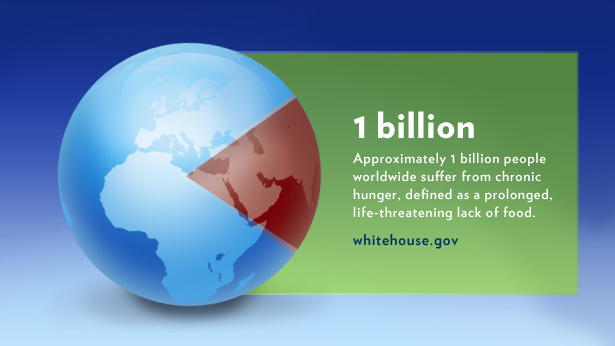 Hunger threatens the health and well-being of a nation’s citizens, and increases a country’s risk of democratic failure, rioting, violence, and civil conflict. It costs developing countries approximately $450 billion per year in lost GDP.

Poverty is a principal cause of hunger—it prevents people from having access to food and the tools they need to grow it. Natural disasters, conflict, lack of infrastructure, and poor farming practices also contribute to the growing problem of hunger as the world population increases.

But as President Obama explained today at the Symposium on Global Agriculture and Food Security, history teaches us that one of the most effective ways to pull people and entire nations out of poverty is to invest in their agriculture.

This weekend, G8 and African leaders will meet to discuss a major new alliance with private sector partners to reduce hunger and lift 50 million people out of poverty by investing in Africa’s agricultural economy. This new partnership builds on the commitment leaders made during the 2009 G8 meeting in L’Aquila to put the fight against hunger at the forefront of global development.