June 29, 2012 at 6:16 PM ET by Ronnie Cho
Twitter Facebook Email
Summary:
Thanks to the help of thousands of students, student loan interest rates will not double on July 1st.

You did it! Because of your incredible work to make students’ voices heard and by standing shoulder to shoulder with President Obama to make college more affordable, interest rates on student loans will not double on July 1st, saving millions of young people an average of $1,000.

As Department of Education Secretary Arne Duncan said last Friday, “You spoke, the nation heard you, and Congress acted. Democracy worked because of your tireless efforts.” 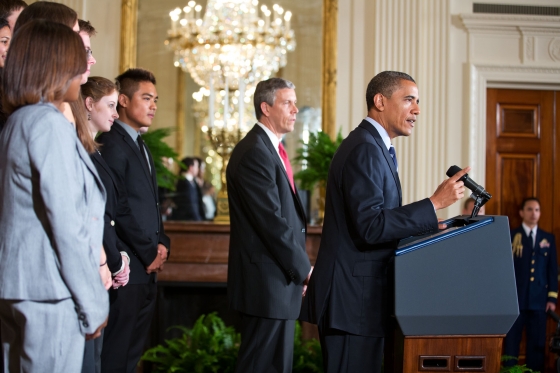 Every action you took made a difference. You got #dontdoublemyrate trending on Twitter, you helped the President slow jam the news, you teamed up with your local elected officials, and you joined your fellow classmates in colleges around the country to  make sure that every hardworking student gets a fair shot at the skills and training needed to get a good job in today's economy. In short, you got it done!

Take a look at how much students in your state will save.

President Obama has said, “In today’s economy, there is no greater predictor of individual success than a good education.  Right now, the unemployment rate for Americans with a college degree or more is about half the national average.  Their incomes are twice as high as those who don’t have a high school diploma.”

Thank you for all you’ve done to make college more affordable for millions of students and middle class families.