Happy Birthday, We The People!

September 24, 2012 at 3:40 PM ET by Erin Lindsay
Twitter Facebook Email
Summary:
On September 22, 2011 we launched We the People, a new platform that allows anyone to create or sign petitions asking the Obama Administration to take action on a range of issues. Check out We the People one year later.

Update: The signatures threshold for petitions on the We the People platform to receive an official response from the White House has changed since this blog post was published. See the latest signature thresholds.

A year ago, the White House launched We the People, a new platform that allows anyone to create or sign petitions asking the Obama Administration to take action on a range of issues. In just one year's time, the platform has generated 3.4 million signatures by 2.8 million users. And what's even more exciting is that participation is growing across the board — with more users and signatures every month.

We really couldn't anticipate just how popular We the People would be, especially at the beginning. In the first week, nearly 8,000 petitions had been created, racking up more than 600,000 signatures by 375,000 users. Also, thirty petitions reached our original threshold of 5,000 signatures. This was a good problem to have, but we knew that this many petitions would challenge our ability to offer timely and meaningful responses to petitions in the long term. So we raised signature threshold to receive a response to 25,000.

From the beginning we’ve said that if a petition gathers enough online signatures, policy officials here at the White House and across the Administration will review it and issue an official response. In this first year we’ve had 116 petitions cross the threshold and 103 have already received a response.  And, despite the fact that only a small percentage of the over 50,000 petitions have crossed the signature threshold, you’d probably be surprised to hear that 1.1 million people or 39% of users have received a response.

Its also worth noting that starting on May 15, 2012 we began surveying signers who received a response. Since then, we've found that 78% of survey responders said that even if they don’t agree with the Administration’s response, it was still helpful to hear our position on the issue, 54% of responders learned something new, and a full 88% would consider creating or signing another petition on We the People.

For an inside look at how we review petitions and develop responses, we put together a short video. Watch We the People: Your Voice in Our Government.

We the People is an online petitioning platform, not a referendum.  We may not agree with the policy views expressed in every petition, and gathering enough signatures to cross the threshold for a response does not guarantee that the Administration will change our policy on a specific subject. But, in many cases, petitions posted on We the People have helped spur discussions of important policy issues here at the White House and across the Administration. You can read more about a few of these here.

During its first year we’ve worked to continually improve We the People, not only by raising the signature threshold to so we can provide more timely and meaningful responses, but also working to include engagement opportunities for petition signers to connect directly with the Administration officials who have written their response. We’ve also worked through some technical issues, and have made the process of creating and signing petitions easier than ever. We’ve even released the source code powering We the People so that anyone can contribute features and fixes or install the application on their website.

But there’s still more work to do—and we need your help figuring out how we can improve. You can submit your feedback here or on Twitter @WHWeb. 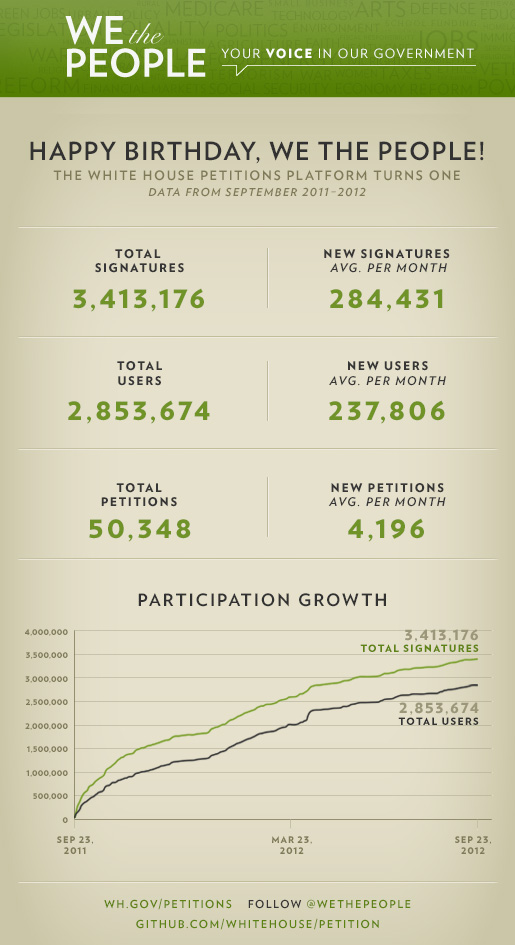