Note: This live session of Office Hours has concluded. View the full question and answer session below or at Storify.com

Last year, on World AIDS Day, President Obama announced ambitious new targets in the global fight against HIV/AIDS, and on the domestic front focused on investment to support the first comprehensive National HIV/AIDS Strategy to fight the epidemic here at home. In the President’s speech that day he said: “we are going to win this fight. But the fight is not over…”

One year later, the President's commitments have translated into real measurable progress. Internationally, we've seen that ambitious treatment and prevention targets announced by the President are on track to be met, and domestically, the number of Americans living with HIV on waiting lists for medication has dropped by over 95%.

Have questions about steps the Obama Administration has taken both domestically and abroad as we move toward an AIDS-free generation?  Tomorrow, Friday, November 30th at 3:00 p.m. ET join us for a special session of White House Office Hours with Senior Advisor Valerie Jarrett and Gayle Smith, Senior Director, National Security Council.  During a live Q&A on Twitter they will answer your questions about the Obama administrations role in the global fight against HIV/AIDS.

Here’s are the details:

So take a few minutes and learn more about how the White House is honoring World AIDS Day 2012 and then join us for Office Hours on Twitter with Valerie Jarrett and Gayle Smith on November 30th at 3:00 p.m. ET. 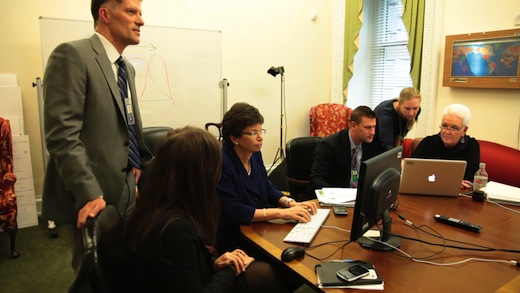