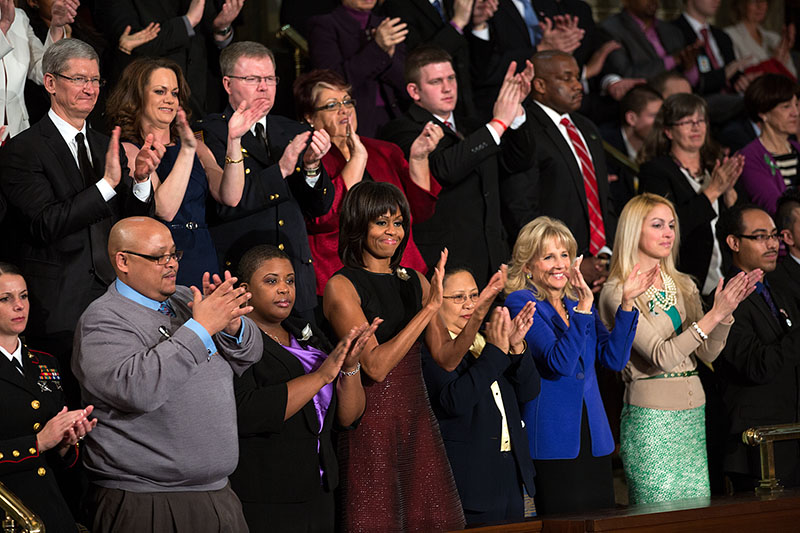 First Lady Michelle Obama, Dr. Jill Biden, and guests in the First Lady's box in the House Chamber, stand and applaud as President Barack Obama is introduced at the State of the Union address at the U.S. Capitol in Washington, D.C., Feb. 12, 2013. (Official White House Photo by Lawrence Jackson)

For nearly three decades, extraordinary Americans who exemplify the themes and ideals laid out in the President’s State of the Union Address have been invited to join the First Lady in her viewing box.  Guests have included students, teachers and innovators, entrepreneurs and those serving in our armed forces.

On Tuesday, February 12, 2013, one guest in the First Lady’s box was Menchu de Luna Sanchez, a Registered Nurse at New York University Langone Medical Center.  When Hurricane Sandy cut the power at NYU Langone Medical Center, Sanchez devised a plan to transport twenty at-risk infants to intensive care units around the city.  She organized the nurses and doctors to carefully carry the babies down eight flights of stairs with only cell phones to light the way.  Even as her own home was flooding, she thought only of protecting the babies in her care.

Sanchez was born, raised, and educated in the Philippines and she immigrated to the United States in the 1980s.  She has worked as a nurse in New York for more than 25 years, and has been at NYU since 2010.  She currently lives in New Jersey with her husband and two children, both of whom are in college.

“This is like a lifetime achievement, lifetime honor, and lifetime privilege,” Sanchez told me when asked how it felt to be mentioned in the President’s State of the Union Address.  “It was like floating in air,” she added, in reference to her experience sitting between First Lady Michelle Obama and Dr. Jill Biden in the First Lady’s box.

Sanchez was lauded by President Obama during his speech:

“We were sent here to look out for our fellow Americans the same way they look out for one another, every single day, usually without fanfare, all across this country. We should follow their example.

We should follow the example of a New York City nurse named Menchu Sanchez. When Hurricane Sandy plunged her hospital into darkness, her thoughts were not with how her own home was faring – they were with the twenty precious newborns in her care and the rescue plan she devised that kept them all safe.”

“The experience that night is unimaginable to think about now, but saving lives comes very naturally when situations like these arise,” she said.

When asked how she felt about the President’s speech, Sanchez thanked the President for addressing hardships faced by Americans throughout the country.  She recognized how her own family has benefitted from the policies the President laid out in his speech, including around housing, education, and immigration.

Finally, when I asked her if this experience has changed her life, she humbly brushed it off and said that she’ll be the same as she was before: still the mom of her children, and still the wife of her husband.  The only thing that will change, she noted, is that she hopes to set a good example for others and inspire them to do good things within their communities.

Like the other guests of honor in the First Lady’s box, Sanchez embodies everyday Americans doing extraordinary deeds to better our nation.  We look forward to highlighting the stories of other inspiring Americans in the years to come.

Jason Tengco is the Advisor on Public Engagement for the White House Initiative on Asian Americans and Pacific Islanders.