Please note that this is a co-authored blog post by Gil Kerlikowske, Director, ONDCP and Benjamin Todd Jealous, President and CEO, NAACP. This post also appears on The Huffington Post and the NAACP blog.

In Los Angeles not long ago, a man named Michael Banyard ran afoul of California’s “three strikes” law. After bouts of homelessness, unemployment, suicidal thoughts, and a criminal record driven by an underlying substance use disorder, Michael faced a mandatory 25-year prison sentence.

Fortunately for Michael, Federal District Court Judge Spencer Letts was put in charge of his final sentence appeal. Judge Letts saw Michael not as a hopeless, drug-using criminal, but as an individual with a disease in need of help. The judge then did something highly unusual. He not only reversed Michael’s sentence, he invited him into his chambers to talk. 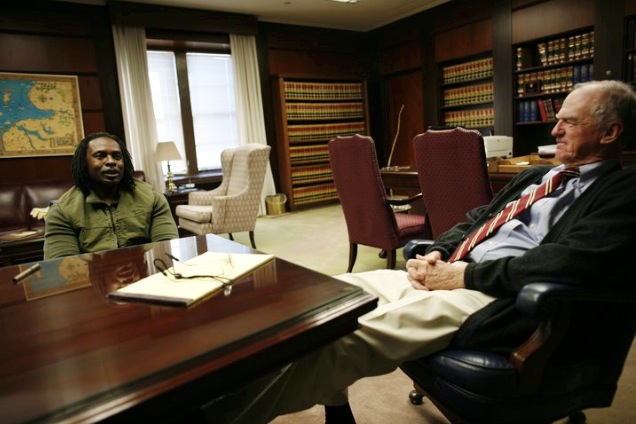 Here were two men who could not be more different – a white, Yale- and Harvard-educated judge and former corporate vice president, and a shy African American who had spent most of his adult life in prison. And yet, the men found they had more in common than either could have imagined.  Judge Letts knew that repeatedly incarcerating Michael wasn’t accomplishing much.

Over the years, Judge Letts became, in Michael’s words, the father he never had. The Judge gained something extraordinary too. Michael, he said, “showed me that my gut feeling was right – that people are basically the same, with the same basic goodness, if you just give them the chance.”  Today, Michael Banyard has received his GED degree and spends his time volunteering at the Los Angeles Dream Center, where he graduated from a faith-based program that he credits for his transition away from substance abuse.

Stories like this illustrate the kind of thinking needed to reform our nation’s criminal justice and drug control policies. In 2011, about seven million people were under the supervision of the criminal justice system in the United States. Of these, about two million were behind bars. And nearly one quarter - 500,000 - of those behind bars are there for drug related offenses. America’s incarceration rate – 756 per 100,000 population – is the highest in the world. High rates of incarceration have resulted in prison overcrowding and state governments facing the costs of a rapidly expanding penal system.

In addition, our nation’s historical emphasis on incarceration has significantly affected communities of color. African Americans are disproportionately incarcerated for drug offenses, accounting for almost half (45 percent) of all drug offenders in state prison in 2010. (Whites accounted for 29 percent.) Among prisoners age 18 to 19, African American males are imprisoned at more than 9 times the rate of white males, and African American females are imprisoned at between 2 and 3 times the rate of white females.

It is clear that we cannot simply arrest our way out of the drug problem. Instead, we need smarter, results-based criminal justice policies to keep our communities safe, including treatment for people with substance use disorders and mental health issues.

To bring about real, meaningful change, we need a fundamental shift in how our Nation discusses drug policy. This begins with the acknowledgement that our drug problem is a public health issue, not just a law enforcement issue.  It means acknowledging that an ever-growing body of scientific research clearly demonstrates that addiction – the underlying cause of too much crime in this country – is a disease that can be prevented and treated successfully.

Armed with the indisputable fact that preventing and treating addiction is an effective strategy for reducing substance abuse and crime, the Obama Administration and the NAACP are committed to pursuing evidence-based policies that strengthen families and communities across America.

Already, the Administration has worked to expand specialized courts that divert roughly 120,000 non-violent offenders into treatment instead of prison each year. The President has requested that Congress increase its commitment for drug treatment programs for 2013. And in 2010, President Obama signed into law the Fair Sentencing Act, which made progress in reducing the 100-to-1 disparity between sentences for powder and crack cocaine that disproportionately affected minorities and also eliminated the mandatory minimum sentence for simple possession of crack cocaine.

Significant accomplishments all, yet more must be done, particularly at the state level.

Demonstrating how criminal justice reform can be a bipartisan issue, the NAACP has worked tirelessly with elected officials from both parties to achieve sensible reform. With the support of the NAACP, Republican Governor Nathan Deal of Georgia signed into law the most sweeping criminal justice reform legislation in the country. The NAACP also worked to find common ground with Republican Governor Bob McDonnell of Virginia, who shut down prisons and called for more money to be sent to universities. In Texas, the NAACP helped push Republican Governor Rick Perry to sign 12 progressive reforms that led to Texas scheduling the first prison closure in the state’s history.

Actions by the Obama Administration, the NAACP, and others are vital steps toward reshaping and redirecting our nation’s criminal justice system. These are only the first steps, however, and the road ahead is long. It will take still more action, more time, more work, and more innovative thinking to bring about the reforms that are so urgently needed.

The challenge is immense, but America is up to it. Working together, we can reduce the heavy toll of substance use in our cities, neighborhoods, and families.  Combining proven public health and public safety strategies will help break the vicious cycle of drug abuse, crime, and incarceration. This, in turn, will save countless lives and taxpayer dollars, make America stronger and safer, and ensure a more perfect union.