February 28, 2013 at 2:27 PM ET by Maureen Tracey-Mooney
Twitter Facebook Email
Summary:
Secretary of Education Arne Duncan and Secretary of Homeland Security Janet Napolitano were joined by leaders from across the country to discuss the development of high-quality emergency management plans to make our schools, institutions of higher education, and houses of worship safer from violence. 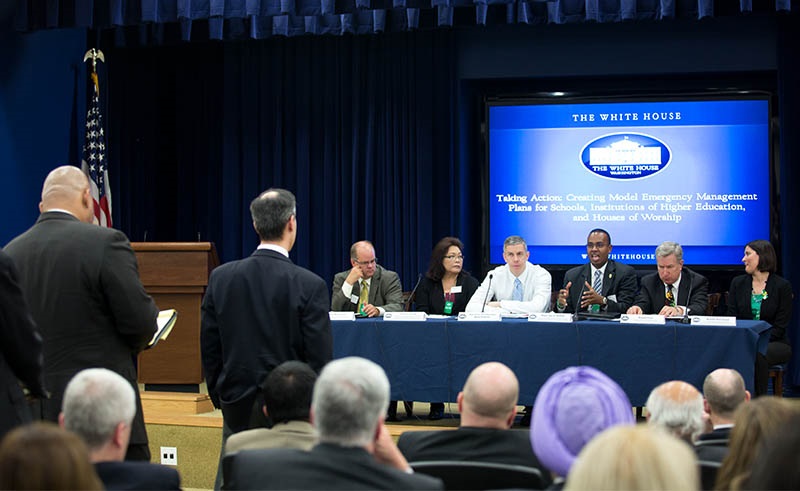 Yesterday, over 100 leaders from across the country came to the White House to join Secretary of Education Arne Duncan and Secretary of Homeland Security Janet Napolitano for a discussion about how to make our schools, institutions of higher education, and houses of worship safer through the creation of high-quality emergency management plans.

Secretary Duncan noted that, “Some tough lessons we’ve learned over time, some inspiring lessons as well, but if we can all learn from each other, learn together, and go back home to our communities, it makes me hopeful about where we can go despite the tremendous challenges we face.”

On January 16th, President Obama, through an executive action, directed the Departments of Education, Homeland Security, Justice, and Health and Human Services to work together to create model emergency management plans for these communities. Yesterday’s event helped inform the agencies’ work to implement that executive action. The President’s plan to reduce gun violence includes a total of 23 executive actions, as well as specific proposals that he has called on Congress to act on right away.

The event included three panels focused on the emergency management needs of schools, institutions of higher education, and houses of worship, and lessons learned from past mass shootings. The panels were moderated by Secretary Duncan, Secretary Napolitano and Richard McFeely, an Executive Assistant Director at the FBI. A range of experts from the law enforcement, mental health, faith, education and emergency management communities, as well as survivors of gun violence, participated in panels and contributed to a robust audience discussion.

Many of the panelists noted the importance of not only having high quality emergency plans in place, but making sure all key parties, from law enforcement, to teachers, to clergy, are involved in formulating these plans. It’s important that all perspectives are included so that all key players have an in-depth understanding of the plan, can train others on the plan, and can execute the plan in case of emergency. As Secretary Napolitano stated, “It’s hard to do a lot of this for the first time in a crisis.”

Wrapping up the day, Secretary Napolitano said that “We’ll take the ideas, the thoughts, the suggestions, and build them into the plans that we are working on with our colleagues…This will be an ongoing dialogue. We don’t stop with a session.”