The Third Anniversary of the Affordable Care Act

March 26, 2013 at 2:30 PM ET by Alan Krueger, Alan B. Krueger
Twitter Facebook Email
Summary:
Provisions of the Affordable Care Act have already helped millions of young adults obtain health insurance coverage and have made preventive services more affordable for most Americans. When fully implemented, the law will expand coverage to an estimated 27 million previously uninsured Americans and ensure the availability of affordable coverage through traditional employer-sponsored insurance and the new Health Insurance Marketplaces.

This month marks the third anniversary of the passage of the Affordable Care Act. Provisions of the Act have already helped millions of young adults obtain health insurance coverage and have made preventive services more affordable for most Americans. When fully implemented, the law will expand coverage to an estimated 27 million previously uninsured Americans and ensure the availability of affordable coverage through traditional employer-sponsored insurance and the new Health Insurance Marketplaces (often referred to as Exchanges).

This blog post and the accompanying report describe progress toward slowing the growth of health care costs and improving the efficiency of the health care system.

Growth in Health Care Costs Has Already Begun to Slow

There are signs that the Affordable Care Act (ACA) has already started to help slow the growth of health care costs and improve the quality of care through value-based purchasing programs, strengthened primary care and care coordination, and pioneering Medicare payment reforms. For each year from 2009 to 2011, National Health Expenditure data show the real rate of annual growth in overall health spending was between 3.0 and 3.1 percent, the lowest rates since reporting began in 1960.

With the exception of a spike in 2006, the year Medicare Part D was introduced, the growth rate of Medicare spending per enrollee—a measure of health care spending intensity—has been on a downward trend since 2001, with a particularly significant slowdown over the past three years (see Figure 1). While Medicare enrollment is expected to increase 3 percent a year over the next decade, the rate of growth in spending per enrollee is now projected to be approximately the same as the rate of growth of GDP per capita, according to the CBO and Office of the Actuary at CMS. 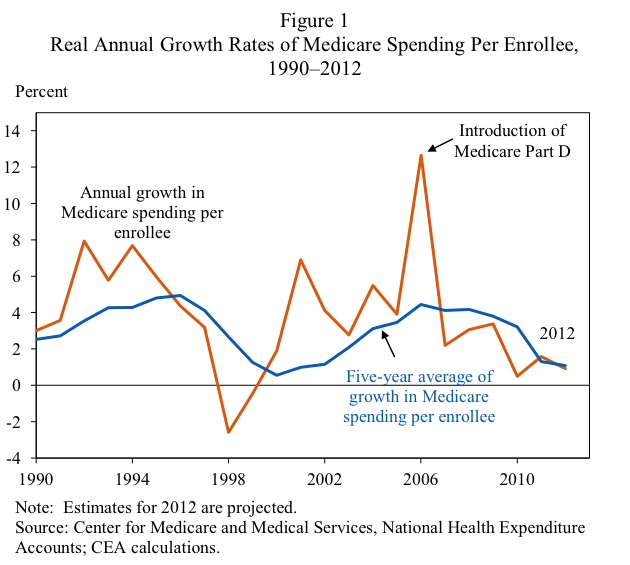 The ACA includes a series of provisions designed to reduce spending while improving the quality of care in the health care system. Relevant provisions include efforts to foster coordinated care, improve primary care, reduce preventable health complications during hospitalizations, and promote the adoption of advanced health information technology.

Early responses to the ACA may have already contributed to the decline in per enrollee spending since 2010. For example, the decline in the hospital readmission rate in Medicare, coinciding with the introduction of the Partnership for Patients program in 2011, points to early effects of the ACA on spending. Likewise, infrastructure investments and care process changes, either funded directly by the ACA or stimulated through the ACA’s payment reform, may also have slowed the growth of health care spending.

The ACA has also established initiatives that reduce the spending inefficiencies in Medicare due to the traditional fee-for-service incentives and fragmentation across providers, by aligning financial incentives to encourage provider organizations to deliver higher-quality, more efficient medical care. Already, 4 million Medicare beneficiaries receive care from the more than 250 Accountable Care Organizations that have been created by physicians across the country to take responsibility for the cost and quality of care for their patients over time. The ACA also created the Center for Medicare and Medicaid Innovation, which is charged with identifying new and effective systems of delivering and paying for care. Initiatives within the CMS Innovation Center include accountable care organization shared savings models, as well as bundled payments to hospitals and post-acute-care providers.

Is the Cost Curve Bending?

The long-run growth rate of per-capita health care spending has significant implications for the budget. Medicare spending represented 3.7 percent of GDP in 2011. Under current law, including cost control measures of the ACA and the Sustainable Growth Rate-mandated physician payment cut, CMS projects that Medicare spending will rise to represent 6.7 percent of GDP in 75 years, with long-term nominal per-beneficiary spending growing at a rate on average equal to 4.3 percent per year (Medicare Trustees 2012). 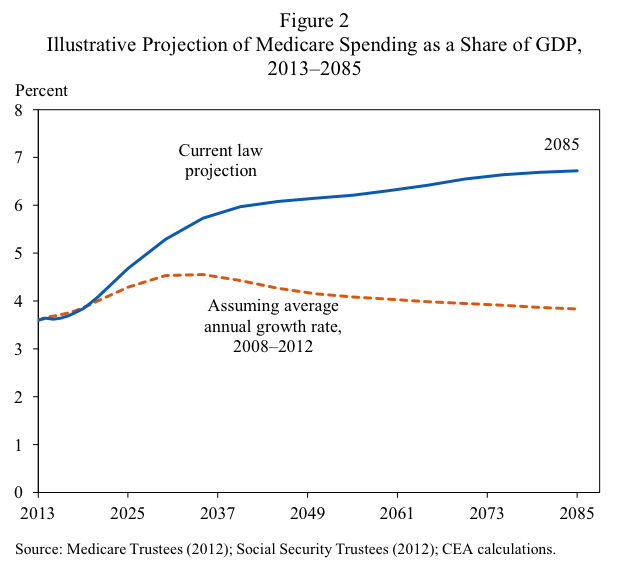 “…suggest that the health care cost curve may be bending more rapidly than official forecasts project… Policy changes to reduce Medicare and Medicaid spending will continue to be a priority (the President suggested reforms in his State of the Union address), and revenue increases will almost certainly be necessary. But these observations suggest that we need to continue doing what has been successful in reducing growth in health care spending rather than pursue a radical rethinking of those programs’ operations.”

All of this is to say we’ve made progress toward our goals, thanks in large part to the ACA. Still, there remains work to be done, which is why the President has proposed sensible reforms to health programs to build on the savings we’re already beginning to realize from the Affordable Care Act.

Download the report: The Affordable Care Act and Trends in Health Care Spending

Alan Krueger is Chairman of the Council of Economic Advisers