April 12, 2013 at 7:02 PM ET by Colleen Curtis
Twitter Facebook Email
Summary:
The Naval Midshipmen visit the White House to celebrate winning the Commander-in-Chief Trophy against the other service academies -- for the eighth time in 10 years. 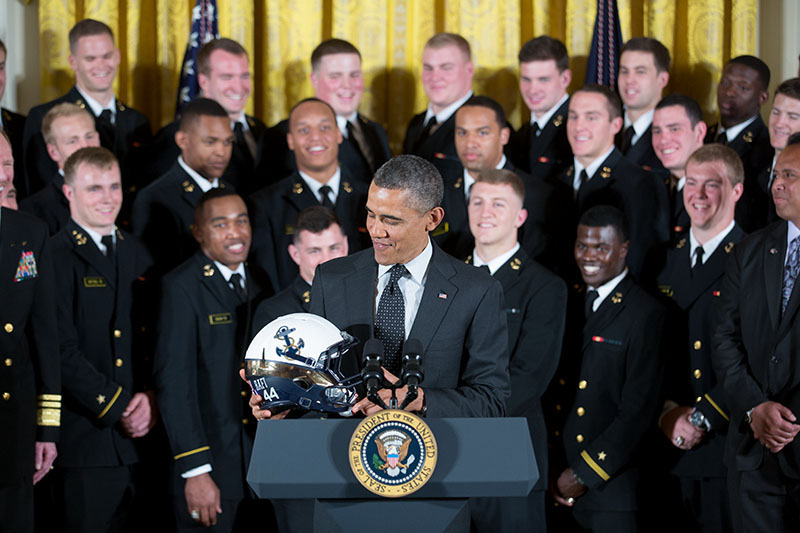 President Barack Obama examines the helmet given to him by the United States Naval Academy football team during the ceremony to present the Commander-in-Chief Trophy to the team in the East Room of the White House, April 12, 2013. (Official White House Photo by Chuck Kennedy)

The Navy Midshipmen were at the White House today, marking eight visits in ten years that the U.S. Naval Academy's football team has won the Commander-in-Chief Trophy against the other service academies. Last year, Vice President Biden was there to award the Trophy when the Midshipmen triumphed in the 113th annual Army-Navy game to win the title.

In his remarks, President Obama highlighted the team's excellent record, but he talked more about their ethic of teamwork and discipline and unselfishness, and praised their focus on academics -- the Naval Academy’s graduation rate has been in the top 10 of the NCAA for the eighth straight year. But most of all, the President paid tribute to the work these champions will be doing in the future, on behalf of this country:

I have no greater honor than serving as your Commander-in-Chief. You’re there for each other and you are there for our country. In just a few weeks when I visit you all for commencement -- and I always have to get ready because Midshipmen, they got strong handshakes, some of them give me chest bumps, I’ve got to just make sure I don’t tip over -- 18 of you will be commissioned as ensigns in the Navy, and 10 more as second lieutenants in the Marine Corps.

And in the years to come, you will all follow their footsteps. You’ll be leading your peers in some of the most complex, dangerous missions on the planet. You’ll be teaching them to pull together, to keep their mission in focus, to always remember that “it’s not about me.”  And together, your victories will not simply be about football trophies -- as impressive as that trophy is -- but it will be about our security and our values and protecting our freedom.

So I want you to know that I could not be prouder to have each of you representing this great country of ours. Americans all across the country feel the very same way. And every single day, we will stand behind you and support you, and do the very best that we can in our own lives to reflect the courage and the honor and the character of the men and women of the United States Naval Academy. So God bless you.

You can watch the whole ceremony below or on YouTube: