June 11, 2013 at 4:15 PM ET by Julie Chavez Rodriguez, Julie Chávez Rodríguez
Twitter Facebook Email
Summary:
The bipartisan, commonsense immigration reform bill being considered by the Senate is the best chance we’ve had in years to fix our broken immigration system – in large part because of the diverse and unusual coalition of stakeholders that have come together to support it. 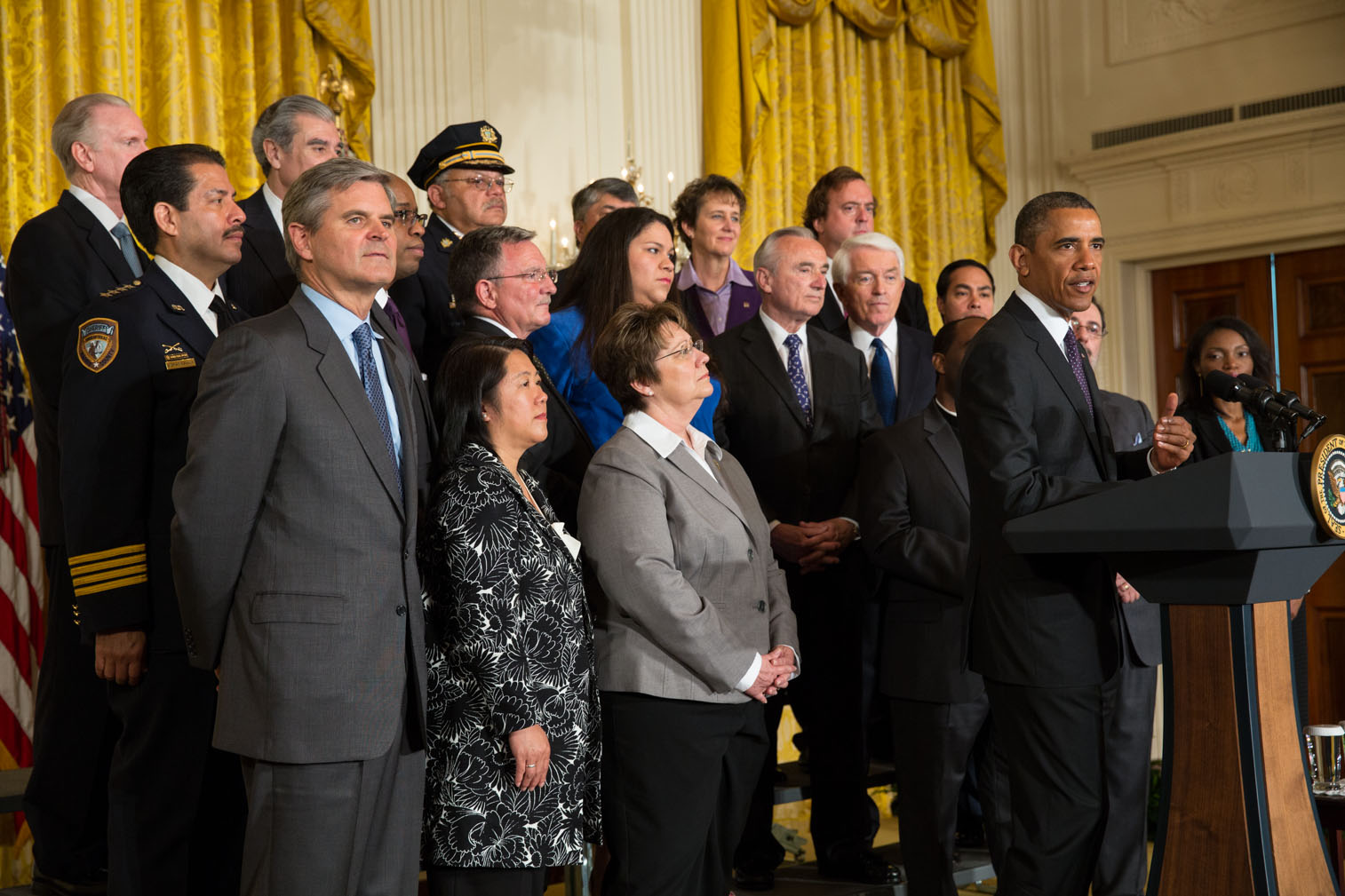 As President Obama made clear earlier today the bipartisan, commonsense immigration reform bill being considered by the Senate this week is the best chance we’ve had in years to fix our broken immigration system – in large part because of the diverse and unusual coalition of stakeholders that have come together to support it. That coalition has united business and labor leaders, Republican and Democratic elected officials, the technology sector, law enforcement officers, faith and civil rights leaders, DREAMers and the many other stakeholders who agree that, while they may not see eye to eye on every issue, commonsense immigration reform is critical to our nation’s economic growth, competitiveness and national security.

After the President spoke, these different stakeholders all shared why they have joined forces to support the Senate’s bill and fight to make bipartisan, commonsense immigration reform a reality for generations to come. Check out a roundup of their comments below:

“On behalf of the American business community, I would like to thank the President for his remarks today and his vigorous support for a common-sense immigration bill and for gathering together the people that are behind me who represent a broad section of American society.  We disagree on a lot of things, but we vigorously agree on a bill that makes common sense and takes people out of the shadows and provides for our economy the people we need to move forward.   We’re looking forward to today’s vote and working through the summer to get this thing done.” -- Tom Donohue, President and CEO, US Chamber of Commerce

“This is a start-up nation. Almost half of our Fortune 500 companies, as the President said, were started either by first- or second-generation immigrants.  So it’s very important that we continue to be a magnet for talent, that we really become the place that people want to start companies and start industries because that's the best way to drive our economy, the best way to drive our economic growth, the best way to drive down our unemployment.  We’ve got to make sure that we are able to attract those risk-takers, the pioneers who really believe in America as the most entrepreneurial nation in the world.” -- Steve Case, Chairman and CEO, Revolution LLC

“For every 100 foreign workers we have, we create 40 jobs for U.S. citizens.  I met a restaurant owner the other day who has three restaurants.  He said, if I could find enough workers I would have eight restaurants.  You can multiply that by hundreds of thousands -- that’s what happening in our economy today.  The single-biggest thing we can do for our economy is to pass this immigration bill.  This is first and foremost an economic bill, and to not pass this bill is to deny our economy the recovery and the growth and the prosperity that it warrants.” -- Carlos Gutierrez, former Secretary of Commerce

“What you see here is probably the broadest coalition of American society that’s been assembled.  You have business, you have labor, you have law enforcement, you have entrepreneurs -- we have groups from all over the place, and we all agree on several things.  We all agree, one, that the system is broken; two, that we need comprehensive immigration reform and we need it now.  We understand that it will be good for not only newcomers or immigrants, but it will be good for every worker here.  It will be good for business.  It will be good for the economy.  And that’s why all of us have come together to try to push and get this thing done this year.  Because every day that we wait is a day wasted and a day that we've lost, a day that the economy won't grow.” -- Richard Trumka, President, AFL-CIO

“I’m the sheriff of the largest county in the state of Texas and the third largest in America.  This bill is good for public safety.  Even from the standpoint of businesses, if you want to make sure that communities are safe and strong, you need to support the aspect from the economic standpoint and businesses need to stay strong to keep our communities safe. Secondly, if you want to fight cartels, if you want to fight human trafficking, pass this bill.  This bill is good for public safety, and that’s why I applaud the President for his leadership and I applaud the Gang of Eight for their work in getting us to this point.  Now we’re asking for leadership to stand up across this country and get this bill passed.” -- Adrian Garcia, Sherriff, Harris County, TX

“Immigration reform, it’s the right time,  it’s the right place.  It’s the right thing to do.  As the former Commissioner of New York City and the former Police Chief in Los Angeles, the two largest immigrant populations in America, I’ve dealt firsthand over many years with the issues that that community faces.  This is a bill that needs to pass -- for them and for our country. I also applaud the efforts of the President and hopefully we’ll applaud the efforts of Congress as they debate this bill and bring it to a successful conclusion.” -- William Bratton, former Chief of the Los Angeles Police Department

“This bill represents the best opportunity that we have had in quite a long time to fix our broken immigration system.  It truly is both common sense and comprehensive.  I’m the Mayor of San Antonio, and at the local level, we see every day what happens when people put aside their ideology and partisan labels and actually get things done.  And what we have here is the opportunity for Democrats and Republicans -- people on both sides of the aisle -- to actually get something done in Washington, D.C. that’s going to boost America’s economy and fix our broken immigration system, and they ought to get it done soon.” -- Julian Castro, Mayor, San Antonio, TX

“Fresno County is the breadbasket of our nation.  We produce the food that feeds all of us.  Immigration reform is very important.  What I hear from our farmers is they have employees that are assaulted, robbed in the fields while they’re working, their cars are stolen, but they’re afraid to report crimes because of their immigration status.  No matter what kind of message we try to put out there using our media that we don’t look at papers from victims of crimes, we don’t arrest victims of crimes, the intrinsic fear is still there.  This is necessary for public safety.” -- Margaret Mims, Sherriff, Fresno County, CA

“The members of SEIU are proud to stand with people from all walks of life to insist that the time is now, just as the President said, that we need common-sense immigration reform.  We want safe and secure borders.  We want a pathway to citizenship for 11 million immigrants.  And we want to be able to restore economic fairness across this economy.  And we stand proudly with the rest of the sectors from all across the walks of life represented here today to insist that the Senate needs to move this now.” -- Mary Kay Henry, International President, SEIU

“I’m a DREAMer. I’ve lived in the U.S. for the past 18 years.  This is my home, first and foremost.  And I have a chemical engineering degree, one that’s collecting dust and desperately wants to be used to support our economy, to grow our economy.  I want to be all that I can possibly be in this great nation that I love.  And the way to get there for me, and for millions of others like me, is through immigration reform.  It’s good for families. It’s good for me -- it’s good for DREAMers.  It’s good for our economy.  It’s good for our nation as a whole.  And it’s really important that we stand strong and stand together and pursue common-sense immigration reform that really does speak to our American values.” -- Tolu Olubunmi, DREAMer