Today, the President announced his comprehensive plan to cut the carbon pollution that is changing our climate and affecting public health.  Reducing carbon pollution will keep our air and water clean and safe for our kids and grandkids.  It will also create jobs in the industries of the future as we modernize our power plants to produce cleaner forms of American-made energy that reduce our dependence on foreign oil.  And it will lower home energy bills and begin to slow the effects of climate change. 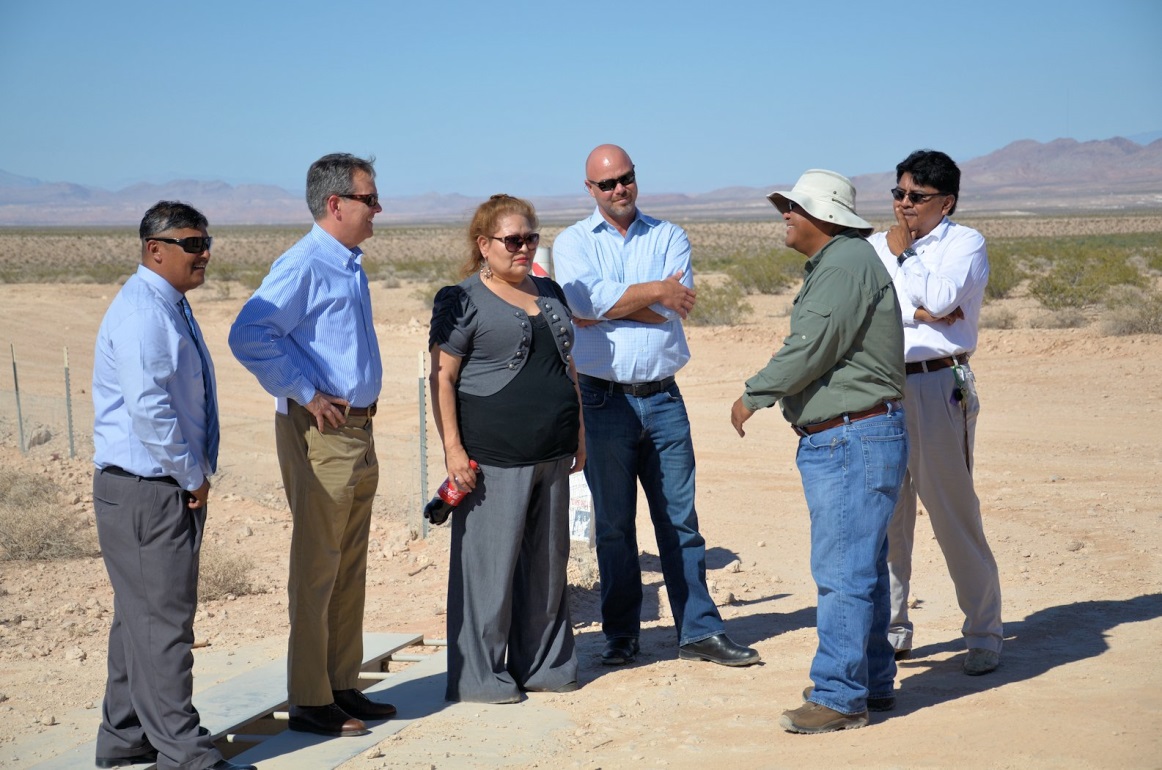 David Agnew, Director of the White House Office of Intergovernmental Affairs, meets with leaders of the Moapa Band of Paiute Indians and the Moapa Solar Project. (by Eric Lee)

While no single step can reverse the effects of climate change, we need to begin preparing to leave a safe and clean planet to our children.  Last weekend, in the desert northeast of Las Vegas, Nevada, I had the privilege of visiting a project that is already working to meet the challenges laid out today in the President's Climate Action Plan.  The intense desert heat and bright sun made it crystal clear to anyone who stepped outside that this location has plenty of solar energy to harness.

The Moapa Solar Project, on the Moapa River Indian Reservation, is a 350 megawatt solar energy project that will help power over 100,000 homes and generate 400 jobs at peak construction.   The Moapa Paiute tribe has set aside approximately 2,000 acres of their 72,000 acre Reservation for the project, including some acreage to ensure a protected habitat for the endangered desert tortoises living near the project. A commitment to protect their tribal homelands from the effects of existing power sources led this tribe to gain approval from the Secretary of the Interior in 2012 for construction of the first utility-scale solar project on tribal lands.  As part of the President's all-of-the-above energy strategy, the Moapa Solar project will help reduce our dependence on foreign oil while creating good jobs in the heart of Indian Country - jobs that can’t be shipped overseas.

The 56 million acres of tribal lands in the United States hold great potential for solar, wind and geothermal projects, and the Obama Administration remains committed to working with tribes on a government-to-government basis to help break down the barriers to clean energy development.  The passage of the HEARTH Act and the recently updated Department of the Interior regulations to streamline leasing on tribal lands are returning greater control over land use decisions to tribes, and individual landowners are already helping to promote housing and economic development throughout Indian Country.  The Moapa Solar Project holds valuable lessons that we will look to as we seek to encourage additional clean energy projects on tribal lands.

While visiting the site of the Moapa Solar Project, I also had the pleasure of meeting a dedicated group of tribal leaders and project managers who are working hard to make this project a reality.  I appreciated their hospitality on a hot Saturday afternoon.  All the best to Chairman Anderson, and a warm thank you to Vice Chairman Lee, Environmental Coordinator Darren Daboda, the Moapa Tribal Council and other tribal leaders who are working hard to bring clean energy and good jobs to their community.  I applaud the Moapa Tribe’s leadership, vision and perseverance, and wish them all the best in this exciting endeavor.

David Agnew is the Director of the White House Office of Intergovernmental Affairs.

Former Deputy Assistant to the President and Director of Intergovernmental Affairs