Today Was a Victory for Equality

June 26, 2013 at 5:04 PM ET by Valerie Jarrett, Valerie B. Jarrett
Twitter Facebook Email
Summary:
Today was a truly historic day in our nation’s history, as the Supreme Court struck down the Defense of Marriage Act.

Today was a truly historic day in our nation’s history, as the Supreme Court struck down the Defense of Marriage Act. As President Obama stated, “this ruling is a victory for couples who have long fought for equal treatment under the law; for children whose parents’ marriages will now be recognized, rightly, as legitimate; for families that, at long last, will get the respect and protection they deserve; and for friends and supporters who have wanted nothing more than to see their loved ones treated fairly and have worked hard to persuade their nation to change for the better.”

I also want to congratulate the plaintiffs in the Proposition 8 case, as the Court today declined to overrule a lower court’s decision that Prop 8 is unconstitutional and unenforceable.

It is fitting that these two decisions came during LGBT Pride Month, when we remember the contributions of LGBT individuals, while looking ahead in the fight for greater equality. 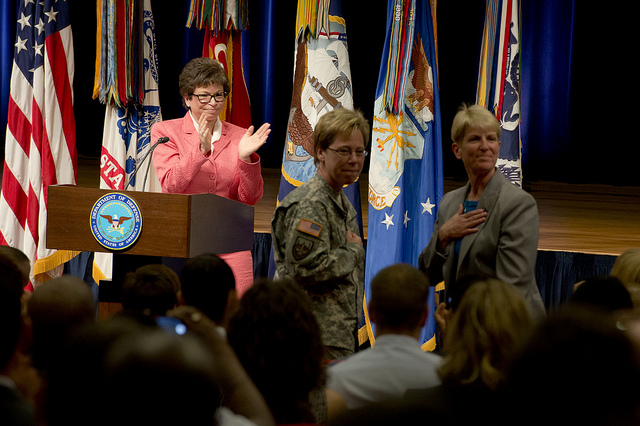 Valerie Jarrett recognizes Brigadier General Tammy Smith and her wife Tracey Hepner during a speech at the Pentagon on June 25, 2013. (Official Photo by Department of Defense)

In fact, just yesterday, I had the privilege of speaking at an event celebrating LGBT Pride Month at the Pentagon.

Secretary of Defense Chuck Hagel, Acting Secretary of the Air Force, Eric Fanning, and I spoke at the event commemorating the contributions that lesbian and gay service members have made in defending our country and its citizens.

When I look back over the last four and a half years since President Obama took office, nothing better exemplifies that kind of profound, meaningful, historic change than the repeal of “Don’t Ask, Don’t Tell.”   It is one of the most significant civil rights accomplishments of President Obama's career.

Last September, on the first anniversary of the repeal of “Don’t Ask, Don’t Tell,” I once again invited a small group of gay and lesbian service members – officers, and enlisted personnel from every service, some of whom brought their partners– to the White House— this time, to share stories about how their lives had changed since the repeal.

For example, I heard from a military spouse who had lived in what she called “a circle of silence.”  She was scared to talk with friends, and coworkers about her relationship with her wife – even during deployments – out of fear that word would get out, and it might endanger her wife’s career.  I can’t even fathom what an immense burden she bore to not be able to confide in a single soul the entire time her wife was deployed. But today, Tracey Hepner and General Tammy Smith can breathe easily. Tracey, who leads an organization of LGBT military partners, spouses and families, was right at Tammy’s side, pinning on her stars when Tammy became the first openly gay general officer last year. They were both at the event yesterday, and it was wonderful to acknowledge them.

But the repeal of “Don’t Ask, Don’t Tell” wasn’t the end of a process to achieve equality for every member of our military community – it was just the beginning.  Our work is not done until we ensure that we support, and care for all of our service members and their families.

And indeed, today’s ruling is also a victory for gay and lesbian service members, their spouses, and their families. As Secretary Hagel indicated in his statement, “Today's ruling helps ensure that all men and women who serve this country can be treated fairly and equally, with the full dignity and respect they so richly deserve.”

And our work is not done until all of our women, and men feel safe from harassment, assault, and violence on their bases. As President Obama said recently, “those who commit sexual assault are not only committing a crime, they threaten the trust, and discipline that make our military so strong.  And that’s why we are determined to stop these crimes, because they have no place in the greatest military on earth.”   I know that Secretary Hagel shares President Obama's commitment, for how can we be the very best in the world if we are attacking our own? Our strength comes from having each other’s back.

Our military has the power to lead the way – just as it has done before, driving change not only within the armed forces, but within American society as a whole – from achieving landmark racial integration, to recognizing that being honest about sexual orientation should not disqualify anyone from proudly serving the country they love.

So we are meeting frequently with the Pentagon’s senior civilian, and military leaders to generate bold initiatives that will make a real difference in dealing with this major threat to our readiness, as well as our ability to recruit, and retain the best All Volunteer Force in the world.

We have also engaged Members of Congress, activists, experts, community leaders, and active-duty enlisted service members to hear their views, and solicit their good ideas as we build an aggressive, and unified approach to tackling this corrosive problem.

And after our initial phase of work is done on sexual assault prevention this summer, we expect to broaden our scope to work with the Department of Defense to address a wider set of issues affecting the overall health of our force.

Our work continues to ensure that the U.S. military is a place where all qualified Americans who are willing to work hard, put the mission first, and stand up to defend this country, can serve their nation, and rise to their highest potential.  Our military has proven time, and again that it is the most professional, and capable fighting force the world has ever seen, and that it can readily adapt to any challenge, or change. That’s because fighting for our country is fundamentally about honor, patriotism, service, and sacrifice, not stereotypes.

Yesterday’s event reminded me again about just how cherished our freedoms are, and the worthy task of fighting for equality and justice for all.  And today’s ruling reminds me that we are truly on the road to a more perfect union.