June 28, 2013 at 5:39 PM ET by First Lady Michelle Obama
Twitter Facebook Email
Summary:
Today, we arrived in South Africa, and I couldn’t be more excited, because two years ago, I visited this country for the first time with my mother and daughters, and it was one of the most amazing experiences of my life.

Today, we arrived in South Africa, and I couldn’t be more excited, because two years ago, I visited this country for the first time with my mother and daughters, and it was one of the most amazing experiences of my life.

On that visit, I met with young women leaders from across the continent who were serving their countries and their communities – educating young people, providing job training for women, working to combat poverty and violence and disease – often in the face of impossible odds.  I also had the chance to spend time with young people from here in South Africa: I danced with children at a daycare center, visited the University of Cape Town with local high school students, and took part in a children’s soccer clinic at one of the stadiums used in the 2010 World Cup.

I also had the chance to meet President Nelson Mandela at his home in Johannesburg, an experience that I will never forget.  Mandela – or “Madiba” as he’s referred to in South Africa – is truly a giant in world history.  As a young man, he led a movement against Apartheid – the South African government’s policies that discriminated against people of color, forcing them to live in separate neighborhoods and attend separate schools and prohibiting them from even voting in national elections.  For his defiance, Mandela was jailed for 27 years, and his struggle became a source of inspiration for people all around the world. 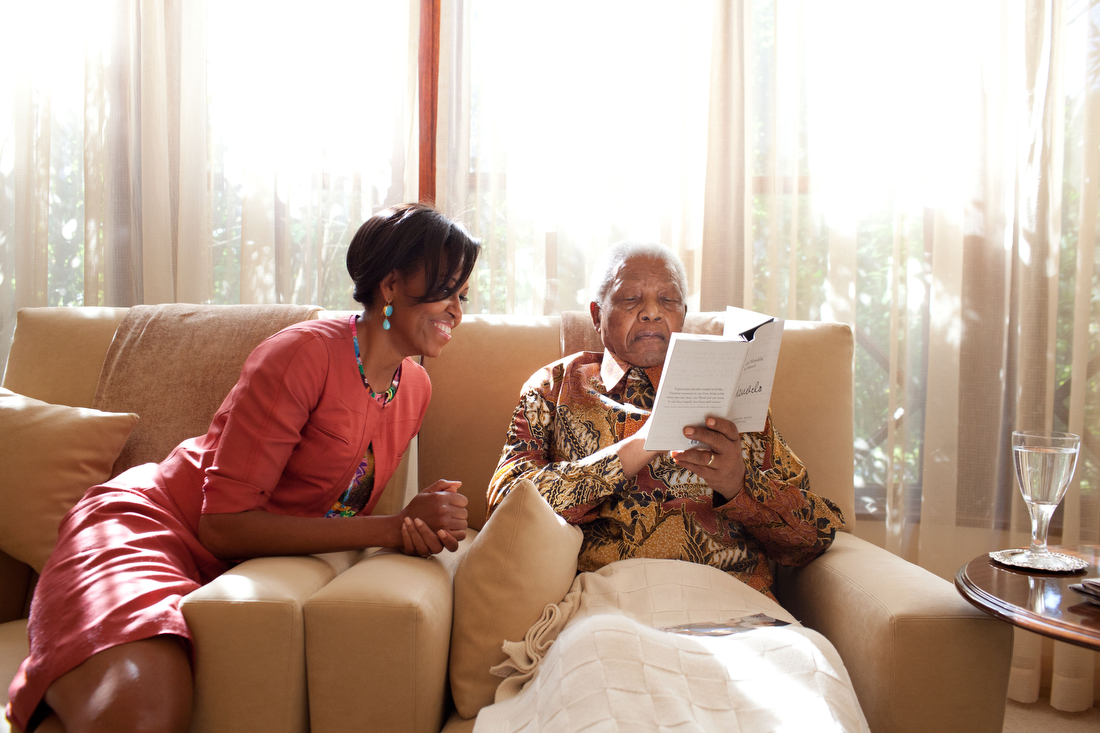 After he was finally released from prison in 1990, Mandela worked to dismantle the Apartheid state and replace it with a full democracy – and in 1994, four years after he was released from prison, he became the South Africa’s first black President. Today, Mandela is 94 years old. As I mentioned in my first post, he’s currently in the hospital, and he is very much in my thoughts and prayers right now. He has been such a source of hope for so many people for so long, and when I reflect on Mandela’s life and legacy, I think about his courage and determination – enduring nearly three decades in jail without ever giving up on his dream of a more just and equal South Africa.  It’s amazing to think about everything he’s seen during his lifetime: the horrors of Apartheid, the quiet desolation of a jail cell, but also the realization of a vibrant South African democracy.  I’m so glad that he lived to see the fruits of his struggle and sacrifice – and I’m so glad that he never gave up on his dream of a better country and a better world for future generations.  As President Mandela once said, “Our children are the rock on which our future will be built.”

That’s exactly how I feel as well.  And that’s why, during my time in South Africa, I’m going to once again reach out to as many young people as I can – and I’m going to try to connect these young people with young people back home in America as well.  Because I know that if young people like you all can share your stories and learn from each other’s experiences, then we’ll all be able to keep moving forward, and together, we’ll be able to build upon Nelson Mandela’s legacy for years to come.