July 30, 2013 at 3:13 PM ET by Arne Duncan, Arne Duncan
Twitter Facebook Email
Summary:
Earlier this week, Education Secretary Arne Duncan met with a group of young people who are mounting an inspiring fight to overcome barriers and make this country stronger. They are called the DREAM Riders, and they are taking their vital message to the entire country.

Ed Note: This is a cross post from Homeroom, the official blog of the Department of Education. You can find the original link here.

Earlier this week, I had the opportunity to meet with a group of young people who are mounting an inspiring fight to overcome barriers and make this country stronger. They are called the DREAM Riders, and they are taking their vital message to the entire country. 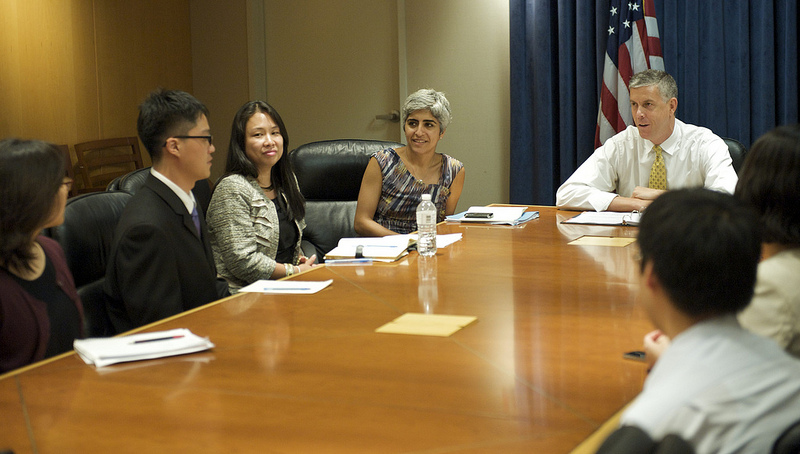 The DREAM Riders are a group of Asian American and Pacific Islander (AAPI) who have been granted deferred action through the Deferred Action of Childhood Arrivals (DACA) program. What that means is that, for certain young people who came to the United States as children, the government has deferred action that would remove them from the country, and given them authorization for employment.

These young people, along with student supporters, are kicking off the DREAM Riders Tour. This tour will take them all over the country with stops in Washington, Virginia, North Carolina, Georgia, Louisiana, Texas, and California, among others. The group plans to rally local AAPI youth and students around the need for Congress to pass commonsense immigration reform and lay the foundation for relationships and future collaboration with local organizations and leaders.

I was inspired by the stories of the DREAM Riders and their friends and family— stories often rooted in hardship and heartbreak as their parents strive to make ends meet — stories of success and struggle as they try to obtain the best education that our country has to offer.

The DREAM Riders and I discussed the significance of a meaningful pathway to earned citizenship for undocumented individuals and our collective efforts to ensure passage of commonsense immigration reform. The Senate has passed this legislation in a strong bipartisan vote for legislation in the Senate, but the House of Representatives has not yet taken action.

The future of our country and our economy brightens tremendously under the provisions of this legislation. Earlier this month, the White House released a report highlighting the numerous and varied economic benefits of fixing our broken immigration system, including helping to grow our economy by creating new business and jobs. And according to the non-partisan Congressional Budget Office, the Senate’s bipartisan immigration reform bill will increase the nation’s GDP 3.3 percent by 2023 and 5.4 percent by 2033. We should not underestimate the economic value of hard-working AAPI immigrant and refugee families: many AAPI immigrants start their journey in the United States as small business owners, investors, and entrepreneurs.

The efforts of these AAPI DREAM Riders will significantly impact younger generations in their communities. I wish these young advocates the best of luck on their upcoming tour and commend their efforts to ensure that the collective voices of their communities are heard.

Arne Duncan is the Secretary of Education.