Ed. note: This is cross-posted from energy.gov. See the original post here.

In the first four years of the Obama Administration, American electricity generation from wind and solar power more than doubled. President Obama’s Climate Action Plan makes clear that the growth of clean, renewable wind energy remains a critical part of an all-of-the-above energy strategy that cuts carbon pollution, diversifies our energy economy and brings the next generation of American-made clean energy technologies to market. The Administration has committed once again to doubling renewable electricity generation from energy resources like wind power. 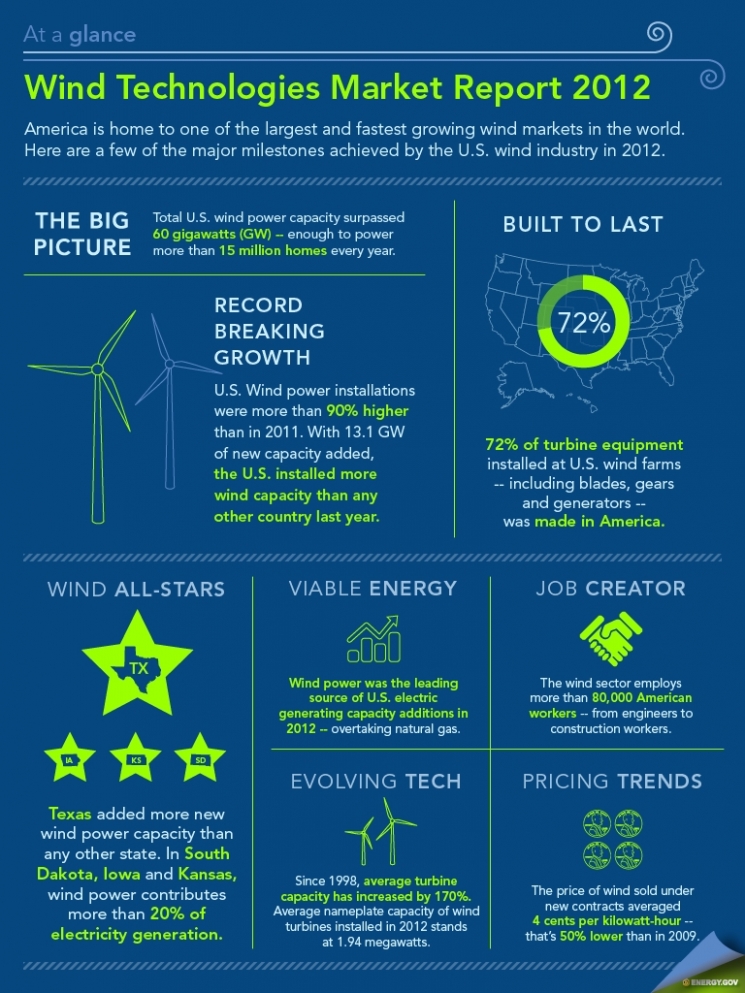 As the graphic above illustrates, America’s wind industry is booming. In 2012, over 13 gigawatts of new wind power capacity was added to the U.S. grid – nearly double the wind capacity deployed in 2011. This tremendous growth helped us surpass 60 gigawatts of total capacity at the end of 2012 – enough capacity to power all the homes in California and Washington State combined.  As energy production goes, so does manufacturing. The 2012 Wind Technologies Market Report estimates that 72 percent of the wind turbine equipment – including towers, blades and gears – installed in the U.S. last year was made in America. This growth in domestic wind manufacturing is creating thousands of new jobs across the country. Industry estimates the wind sector employs more than 80,000 American workers across a variety of sectors, including finance, engineering, construction and project development .

Nine states now rely on wind for more than 12 percent of their total annual energy consumption, and in Iowa, South Dakota and Kansas, wind is contributing more than 20 percent. At the same time, technological innovation and lower maintenance and hardware costs are spurring near-record low prices for wind power. In 2011 and 2012 the price of wind under long-term power purchase contracts averaged just 4 cents per kilowatt hour.

Still, as these reports make clear, wind energy projections for future years are uncertain, due in part to policy uncertainty. That’s why the Obama Administration has called for the extension of the production tax credit which has played a vital role in the development of this clean, renewable energy source.  We’re also working to upgrade our electric grid to provide reliable, affordable clean energy to more and more Americans.

This Thursday, at 3pm ET, the Energy Department is hosting a special Google+ Hangout on wind energy in America where you can ask the experts how wind energy projects, technologies and policies are driving U.S. leadership in this competitive industry. I invite you to join the conversation and learn more at energy.gov/windreport.