President Obama Awards the Medal of Honor to Ty Carter

August 26, 2013 at 4:19 PM ET by Megan Slack
Twitter Facebook Email
Summary:
Staff Sergeant Ty Carter was one of 53 American soldiers who woke up the morning of October 9, 2009 as the outpost where they were stationed -- one of the most remote and vulnerable in Afghanistan -– came under attack by more than 300 Taliban fighters. 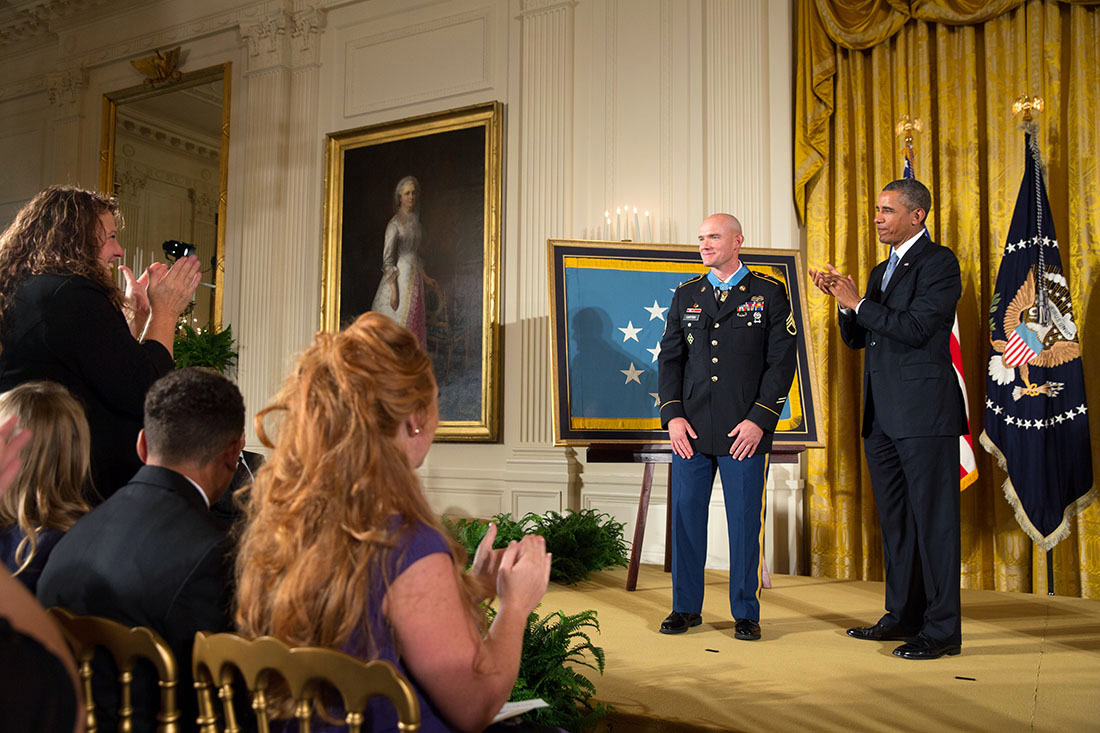 President Barack Obama applauds Staff Sergeant Ty M. Carter, U.S. Army, after presenting him with the Medal of Honor for conspicuous gallantry, during a ceremony in the East Room of the White House, Aug. 26, 2013. (Official White House Photo by Pete Souza)

For this is a historic day -- the first time in nearly half a century, since the Vietnam War, that we’ve been able to present the Medal of Honor to two survivors of the same battle. Indeed, when we paid tribute to Clint Romesha earlier this year, we recalled how he and his team provided the cover that allowed three wounded Americans -- pinned down in a Humvee -- to make their escape.  The Medal we present today, the soldier that we honor -- Ty Carter -- is the story of what happened in that Humvee. It’s the story of what our troops do for each other.

Carter was one of 53 American soldiers who woke up the morning of October 9, 2009 as the outpost where they were stationed -- one of the most remote and vulnerable in Afghanistan – came under attack by more than 300 Taliban fighters.

Ty jumped out of bed, put on his boots and his helmet and his Kevlar vest, grabbed some ammo and he ran -- into bullets coming down like rain, for a hundred meters -- to resupply his comrades out in that Humvee.  When they needed more, he ran back, blasted the locks off supply rooms and sprinted yet again -- dodging explosions, darting between craters -- back to the Humvee.

The ferocious fire forced them inside.  And so it was that five American soldiers -- including Ty and Specialist Stephan Mace -- found themselves trapped in that Humvee, the tires flat, RPGs pouring in, peppering them with shrapnel, threatening to break through the armor of their vehicle.  And, worst of all, Taliban fighters were penetrating the camp.  The choice, it seemed, was simple -- stay and die, or make a run for it.

So once more, Ty stepped out into the barrage, and along with Sergeant Brad Larson, he laid down fire, providing cover for the other three -- including Stephan -- as they dashed for safety.  But in those hellish moments, one man went down, and then another.  And Stephan disappeared into the dust and smoke.

Back in that Humvee, Ty and Brad held out, for hours; rolling down the window, just a crack, taking a shot, over and over; holding the line, preventing that outpost from being completely overrun.  Ty would later say, “We weren’t going to surrender.”  We were going to fight “to the last round.”  And then they saw him -- their buddy, Stephan -- on the ground, wounded, about 30 yards away.

When the moment was right, Ty stepped out again and ran to Stephan, and applying a tourniquet to one of his legs, bandaging the other, tending to his wounds, grabbing a tree branch to splint his ankle.  And if you are left with just one image from that day, let it be this:  Ty Carter bending over, picking up Stephan Mace, cradling him in his arms, and carrying him -- through all those bullets -- and getting him back to that Humvee.

And then Ty stepped out again -- recovering a radio, finally making contact with the rest of the troop, and they came up with a plan.  As Clint Romesha and his team provided cover, these three soldiers made their escape -- Ty, Brad carrying Stephan on a stretcher, through the chaos, delivering Stephan to the medics.

And the battle was still not over, so Ty returned to the fight.  With much of the outpost on fire, the flames bearing down on the aid station, with so many wounded inside, Ty stepped out, one last time, exposing himself to enemy fire; grabbed a chainsaw, cut down a burning tree, saved the aid station, and helped to rally his troop as they fought, yard by yard.  They pushed the enemy back.  Our soldiers retook their camp.

President Obama also recognized Carter's courage off the battlefield in speaking openly and honestly about his struggle with Post-Traumatic Stress. "At first, like a lot of troops, Ty resisted seeking help," President Obama said. But with the support of the Army, his commanders, and his family, he reached out. Now he wants to help other soldiers with their own recovery, the President said.

So let me say it as clearly as I can to any of our troops or veterans who are watching and struggling: Look at this man. Look at this soldier. Look at this warrior. He’s as tough as they come. And if he can find the courage and the strength, to not only seek help, but also to speak out about it, to take care of himself and to stay strong, then so can you.