New Data: Most of the Increase in Employment is in Full-Time Positions Since the Affordable Care Act Became Law

September 6, 2013 at 3:40 PM ET by Jason Furman, Betsey Stevenson
Twitter Facebook Email
Summary:
New data in the Bureau of Labor Statistics Monthly Employment Report show that of the increase in employment since the Affordable Care Act became law, more than 9 out of 10 positions have been full-time.

Ed. Note: This post was updated February 10, 2014 to reflect the most recent data.

Data from the Bureau of Labor Statistics  show that of the overall increase in employment since the Affordable Care Act became law, more than 9 out of 10 positions have been full-time.

The Affordable Care Act continues to improve the functioning of labor markets in a range of ways including helping to slow the growth of premiums, creating affordable new options for small businesses, reducing the “job lock” that can keep workers from taking the best job for them, and generally improving health outcomes and reducing absenteeism. We are already seeing tangible changes in affordability, including employer premium growth at less than one-third the rate of the late 1990s and early 2000s.

Businesses owners who are looking to take advantage of tax credits, and other benefits under the law aimed at making coverage more affordable are encouraged to visit Business.USA.gov/healthcare for more information. 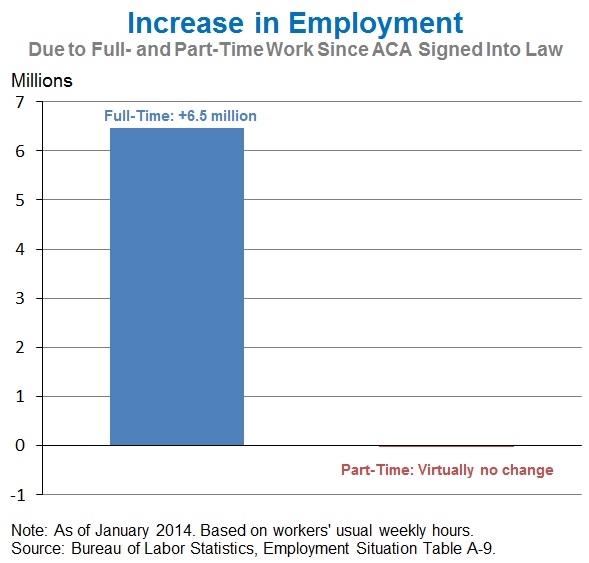 2. The mix of full-time and part-time employment has been typical for an economic recovery. A recent analysis by economists at the Federal Reserve Bank of San Francisco concluded that the share working part-time is in line with historical norms. After adjusting for the 1994 redesign of the Current Population Survey (which changed how part-time employment was measured), the authors found that the share working part-time is actually slightly below that observed in the early 1980s. 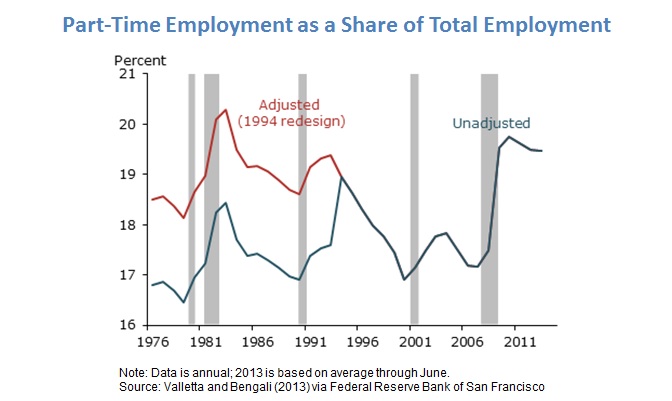 The authors noted, “We have shown that part-time work is not unusually high relative to levels observed in the past, most notably in the aftermath of the early 1980s recession.”  The Congressional Budget Office’s recent report reached a similar conclusion. 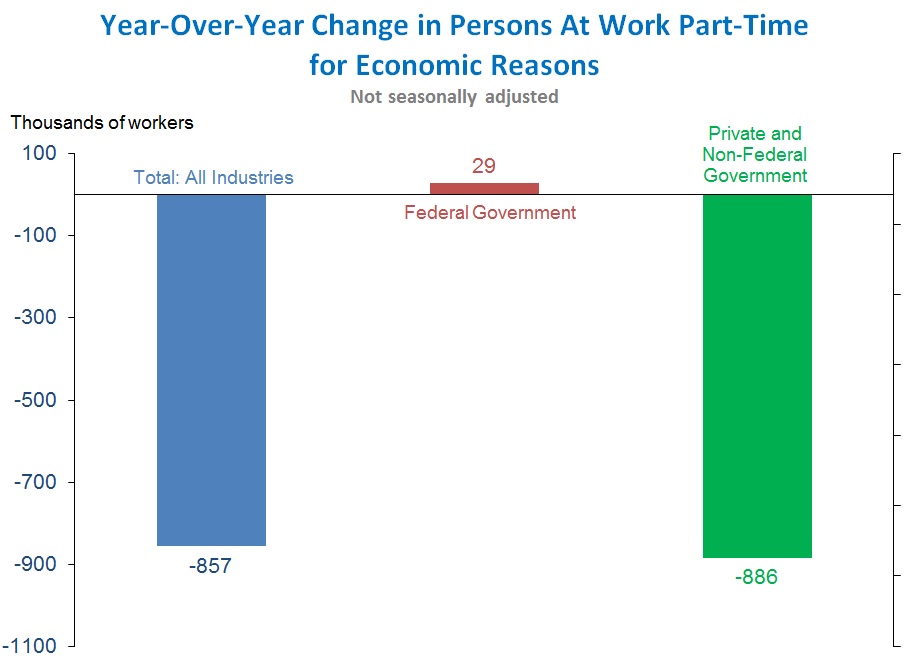 4. There is no systematic evidence that employers are shifting employees to just below 30 hours per week. CEA has analyzed the Current Population Survey to estimate worker hours in more narrow ranges than those published by the BLS.  This analysis indicates that there has been no noticeable shift in employment just above or below the 30 hours per week threshold, a conclusion that has also been corroborated by outside analysts. 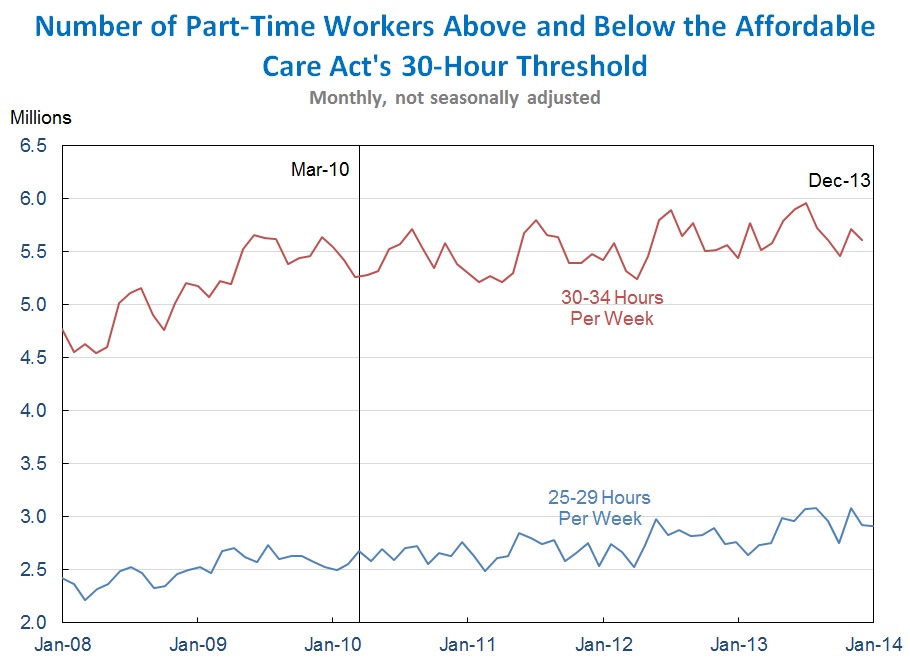 5. Employment growth in restaurants and bars has exceeded what you would predict from sales growth alone. The chart below plots the change in employment and the change in sales since March 2010 for a variety of sectors within the broad category of “retail and food services.” As one would expect, the points cluster around an upward sloping trend line, since sectors with faster sales growth are likely to have faster employment growth. The red dot representing restaurants and bars is well above the trend line, meaning that this sector has had much faster job growth than would be predicted based on its growth in sales. 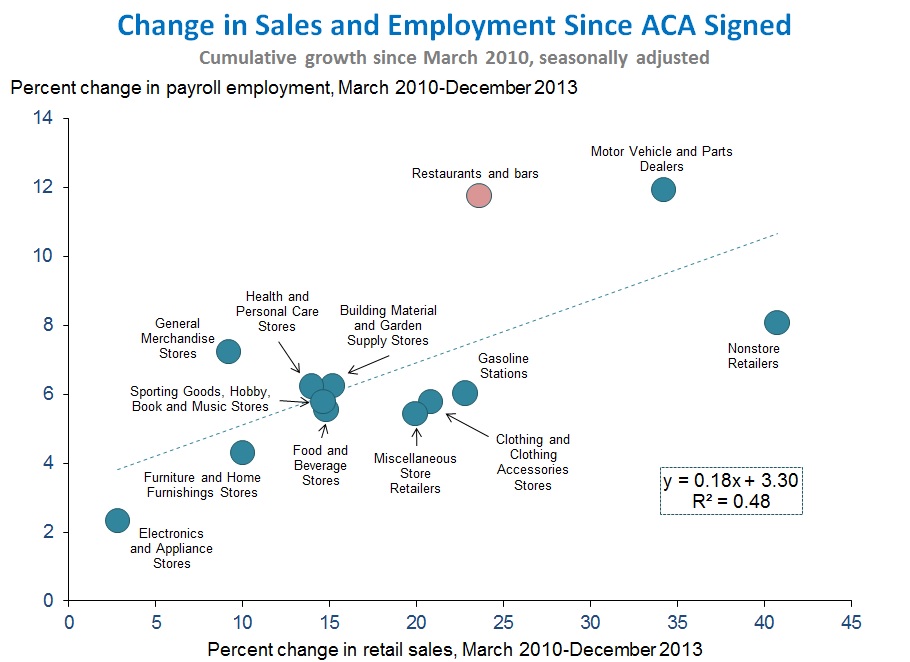 We highlight the change for restaurants for two reasons.  First, many of the news stories claiming that the Affordable Care Act is hurting job growth focus on the restaurant industry.  Second, restaurants have one of the lowest health insurance coverage rates of all the industries shown, and so are most likely to be affected by the employer responsibility provision when it goes into effect.  But the data show that the potential impact of the provision clearly has so far not constrained the industry’s job growth.  As of December 2013, the average workweek for restaurant and bar employees had fully recovered to its pre-recession level and is up 0.3 hours since the passage of the Affordable Care Act in March 2010.

In summary, the job data released today show that the vast majority of job growth since the Affordable Care Act became law is in full-time employment.  Moreover, the Affordable Care Act has a number of measures that continue to improve the functioning of labor markets and the affordability of coverage for workers and businesses alike.