Laying the Groundwork for a Strong Middle Class, City by City 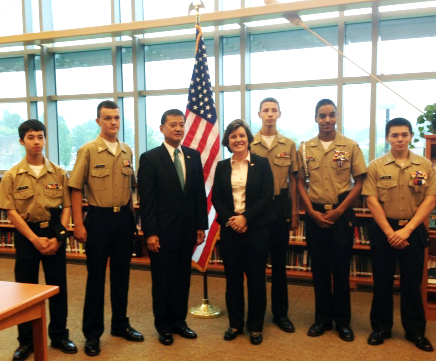 Today’s the VA is helping again to keep America strong. With over a million beneficiaries of the Post 9/11 GI Bill, veterans are receiving the key educational tools they need for new careers, or to grow their own businesses. I’m one of those beneficiaries, made stronger through VA’s benefits and services. While we still have much work to do, we are proud that through investments like these overall veteran employment remains below the national average.

We know that key investments in education and job training pay off. Last year, 140 companies and organizations, in five cities, across seven federal agencies teamed with the White House for the Summer Jobs + initiative and provided over 300,000 employment opportunities for youth.

While more than 100,000 of these youths earned a salary, they gained more than simply a paycheck. Low income youth were targeted for skills programs and mentoring efforts. Dignity Health, a public health non-profit, instructed 500 disconnected youth on modern healthcare IT, creating pathways toward long-term careers and away from the streets. The Workforce Investment Act Youth formula grants--over $781 million in 2013--provide a range of employment and education services to low-income youth. More than $2.5 billion from the Pathways Back to Work Fund has been set aside for summer and year-round employment opportunities for low-income youth.

This year in late July, I was privileged to lend support to President Obama’s Youth Jobs+ challenge to more than 300 mayors, business and non-profit leaders to employ low income and disconnected youth. In my home state of Missouri, I represented the VA and the administration to learn more about St. Louis’s pilot program to get 200 at-risk youth into summer jobs. The impact has been immediate and clear--95 percent of the participants stayed to finish the program.

At VA, senior leadership has answered the President’s call for a focus on promoting youth employment. Secretary Shinseki recently visited Syracuse, N.Y., to address veteran employment and education as part of the Administration’s Youth Jobs+ roundtable series, where Syracuse University’s Institute for Veterans and Military Families played a key role. In Buffalo, N.Y., Under Secretary for Benefits Allison Hickey participated in a Youth Jobs+ roundtable with local veterans groups and local business leaders to discuss solutions to get veterans hired.

We’ve seen the importance of collaboration to accomplishing President Obama’s vision to grow the middle class. The solutions to strengthening America’s economy can’t solely rely on Washington. True success begins in communities like St. Louis, Syracuse, and Buffalo--where passionate local leaders empower the next generation with resources and guidance from city, state and federal agencies.

The next generation looks to us to see how we succeed, just as my generation of veterans looks to those who came before us. So let’s show them effective partnerships at every level to keep us on track toward a stronger America.