The Dramatic Slowdown in Health Costs and What It Means for the Economy, Families and the Budget

September 19, 2013 at 11:30 AM ET by Jason Furman
Twitter Facebook Email
Summary:
New data out yesterday from the Centers for Medicare and Medicaid Services (CMS) and discussed in a piece in Health Affairs show that economy-wide health spending continues to grow at a historically slow rate.

New data out yesterday from the Centers for Medicare and Medicaid Services (CMS) and discussed in a piece in Health Affairs show that economy-wide health spending continues to grow at a historically slow rate.  After adjusting for inflation, health spending growth was 1.7 percent (3.9 percent nominal) in 2011, is estimated at 2.1 percent in 2012 (3.9 percent nominal), and is projected at 2.3 percent (3.8 percent nominal) for 2013.  Assuming the projections hold, these rates of spending growth are the three lowest on record, well below the 4.2 percent average inflation-adjusted rate observed over the decade ending in 2010 and the 5.5 percent average inflation-adjusted rate from 1965 to 2010. As the President said earlier today, these reductions in health cost growth are good for American companies’ bottom lines, good for our economy, and good for jobs. 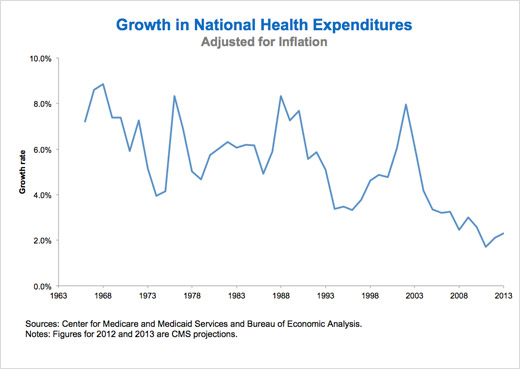 A Broad-based Slowdown in Health Spending

The CMS figures show a slowdown that continues to affect all portions of the health sector.  Over the three record-setting years from 2010 to 2013, inflation-adjusted per-beneficiary spending by private insurers is projected to grow by just 1.6 percent.  The comparable figures for major public health insurance programs are even lower: 0 percent for Medicare and -0.5 percent for Medicaid.  All of these rates are well below the average growth rate of inflation-adjusted per capita health spending over the decade ending in 2010 (3.2 percent) and the growth rate over the longer period 1965 to 2010 (4.4 percent).  Moreover, the slowdown continues to affect virtually all categories of spending, with particularly large reductions for pharmaceuticals, for which spending has actually fallen in real terms over this period. 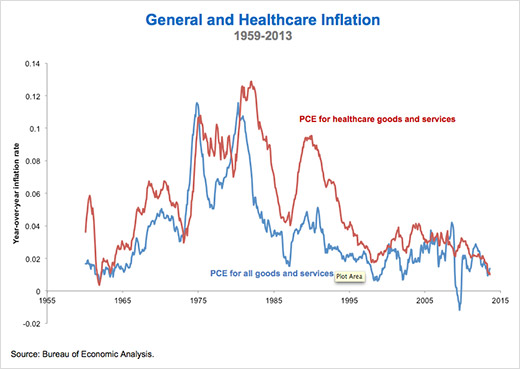 Yesterday’s news from CMS adds to several other recent pieces of evidence showing a slowdown in health spending and prices:

The Slowdown in Health Costs Is Good for Families, Jobs and the Budget

The slowdown in health costs has widespread benefits including:

Going forward, a key question for families seeking affordable health care, for businesses concerned about their bottom lines, and for anyone watching the federal budget is what is causing the slowdown in health spending, and whether those factors are likely to persist.

The CMS analysts ascribe much of the recent slowdown to the 2007-2009 recession and its aftermath and therefore project an acceleration of health spending growth in the years ahead.  Several other analyses have concluded that only a small fraction of the current slowdown can be attributed to the recession, and that much of the slowdown reflects deeper changes affecting the health sector:

It is clear there have been changes for the better in the U.S. health sector.  But now is no time to get complacent, and that’s why the President is focused on successfully implementing the Affordable Care Act, which includes numerous policies to improve the affordability and quality of health care, from paying for value to integrating care to driving out waste in the system.  That’s how we will keep this momentum going.