Five Years After Lehman: Taking Stock of Where We Are

September 20, 2013 at 1:25 PM ET by Ezra Mechaber
Twitter Facebook Email
Summary:
Five years after Lehman Brothers' bankruptcy, we want to help everyone get the context and see the full picture. Check out a behind-the-scenes look of the decision-making process that you won't find anywhere else.

Ed. note: Today at 12:50 pm ET, President Obama will deliver remarks at the Ford Kansas City Stamping Plant in Liberty, MO, highlighting the progress we have made since the beginning of the financial crisis five years ago and the work that lies ahead to continue strengthening our economy and deliver a better bargain for the middle class. Watch live at whitehouse.gov.

In the early hours of September 15, 2008, Lehman Brothers announced it would file for Chapter 11 bankruptcy protection, setting off shock waves through the global economy that had devastating implications for families and businesses. In the months before the President took office, the economy was shrinking at a rate of more than 8 percent and we were losing 800,000 jobs a month.

There's no diminishing the severity of the challenge we've overcome together, and we’ve got a lot more work to do to rebuild an economy where everyone who works hard has a chance to get ahead.

But five years after Lehman Brothers' bankruptcy, we want to help everyone get the context and see the full picture. To mark the anniversary, we've asked senior staff from across the Obama administration to sit down and talk about the moments when key decisions were made — the factors they weighed, the results of the actions that President Obama took.

Check out a behind-the-scenes look of the decision-making process that you won't find anywhere else. 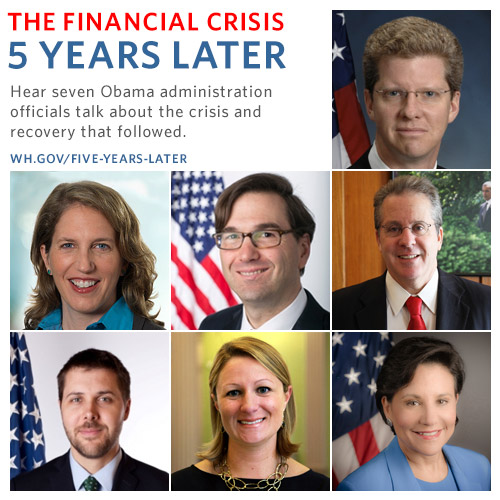