Advance Estimate of GDP for the Third Quarter of 2013

November 7, 2013 at 9:30 AM ET by Jason Furman
Twitter Facebook Email
Summary:
During the third quarter, the economy grew at its fastest pace in a year, an indication that the recovery was continuing to gain traction in the months before the government shutdown. GDP growth was boosted by a positive contribution from consumer durables purchases, the continued recovery in the housing sector, and net exports.

During the third quarter, the economy grew at its fastest pace in a year, an indication that the recovery was continuing to gain traction in the months before the government shutdown. GDP growth was boosted by a positive contribution from consumer durables purchases, the continued recovery in the housing sector, and net exports. We now have an opportunity to build on this progress by increasing certainty for businesses and investing in jobs and growth, while avoiding the types of self-inflicted wounds that restrained the economy in the early part of the fourth quarter.

1. Real gross domestic product rose at a solid 2.8 percent annual pace in the third quarter, the fastest quarterly pace in the last year, and the 10th consecutive quarter of growth. The rate of growth picked up slightly from the also-solid 2.5 percent rate observed in the second quarter. The economy has made substantial progress since the end of the recession, with real GDP now 5.3 percent higher than it was at its peak prior to the recession. Nevertheless, more work must be done to increase economic growth and boost job creation. 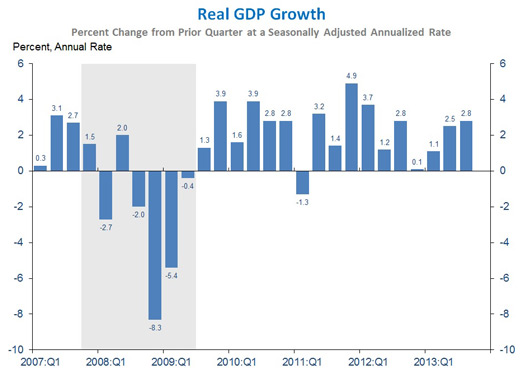 2. In the fourth quarter, GDP growth will be slowed by the government shutdown that lasted from October 1 to October 16 and the brinksmanship over the debt limit that occurred during that period. During the shutdown, hundreds of thousands of Federal workers went temporarily unpaid, families were unable to travel to national parks, oil and gas drilling permits were delayed, Small Business Administration loans were put on hold, and licenses to export high-tech products could not be granted, to name just a few effects. Several forecasting groups have estimated that the shutdown will reduce annualized real GDP growth in the fourth quarter by between 0.2 and 0.6 percentage point. Early indicators of economic activity in October also show that the shutdown weighed on the economy and on consumer sentiment. An index of weekly economic indicators developed by the Council of Economic Advisers dropped sharply in the first half of October, consistent with a 0.25 percentage point reduction in the fourth quarter GDP growth rate. The advance estimate of GDP growth in the fourth quarter will not be available until early 2014. 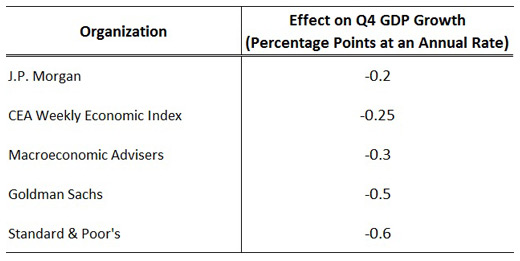 3. The private components of real GDP grew at an annual rate of 3.5 percent in the third quarter, accounting for almost the entirety of overall growth. In contrast, federal government spending declined at an annual rate of 1.7 percent, subtracting from growth for the 10th time in the last 12 quarters. But over the past two quarters, the drag from the federal government has moderated considerably. Real State and local government expenditures had also been in decline for much of the past three years, but this category is starting to show signs of turning the corner, posting its first back-to-back quarterly gain since 2009. On net, the government sectors had little impact on GDP growth in the third quarter. 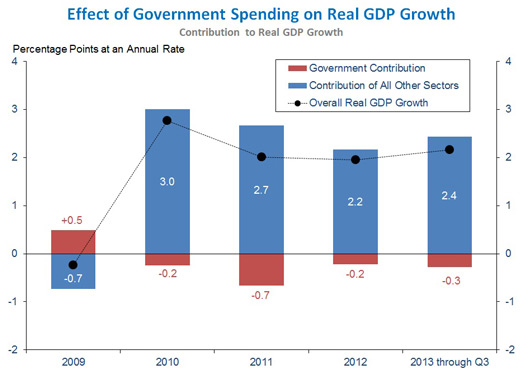 4. Exports have picked up as growth has returned in the Eurozone and strengthened elsewhere. Exports rose at an annual rate of 4.5 percent in the third quarter, while imports rose at a more modest 1.9 percent. As a result, net exports accounted for 0.3 percentage point of the quarterly growth rate. Over the course of the recovery, the rate of export growth has varied, reflecting a considerable degree of volatility in the global economy. The crisis in the euro area intensified in the second half of 2011 and continued to impact the global economy into 2012, when China’s growth also began to slow more markedly. During this period, reduced foreign demand weighed on U.S. exports, which slowed to just 2.5 percent annualized growth. U.S. exports have risen at a faster 6.2 percent annual rate in the last two quarters, coinciding with the return of economic expansion in the Eurozone. Continued efforts to promote American exports would further contribute to growth and recovery. 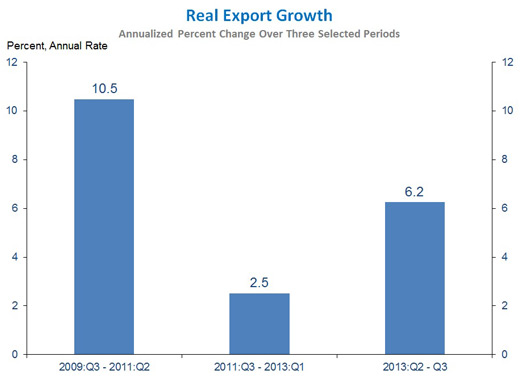 5. Residential investment has posted double-digit annualized gains for five consecutive quarters. Housing investment plummeted during the financial crisis and remained weak early in the recovery, but has been growing strongly since the end of 2011. Despite the increase in mortgage rates this year, there is a significant upside potential in this sector, as housing investment remains well below its historic average as a share of the economy, while the pace of new housing starts, at about 900,000 homes annually, remains well below the pace implied by demographics. 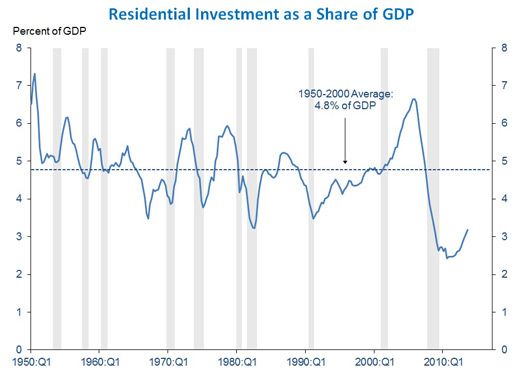